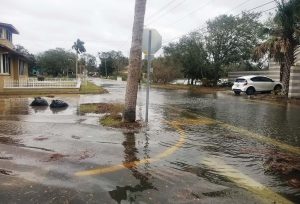 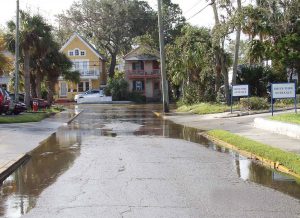 With all the topsy-turvy weather and disasters Mother Nature has generously endowed her nations with over the past year, many cities are adapting and, in cases of major flooding, turning their attention to the mostly unseen world of infrastructure.

Hurricane Matthew — a Category 3 storm of Oct. 7, 2016 — left St. Augustine, Fla., with tremendous flooding in which water consequently flowed over a seawall and filled the streets.

St. Augustine has since put more than a quarter-million dollars forward to kick off a project that focuses on the flooding around Lake Maria Sanchez. It is an endeavor that has also attracted major support from the Federal Emergency Management Agency because of Hurricane Matthew.

This pilot study area for the Florida Department of Economic Opportunity was titled the “Community Resiliency: Planning for Sea Rise” project and is actually divided in half, according to Reuben Franklin Jr., professional engineer and mobility manager employed by the city of St. Augustine.

“The project was split into two phases,” said Franklin. “Phase one began in April 2016 and was completed in June 2016. Th is phase consisted of a sea level rise vulnerability analysis for the city. Phase two began in June 2016 and was completed in May 2017. Th is phase consisted of an adaption plan based on the vulnerability analysis.”

Because many Florida communities like St. Augustine have been experiencing the undesirable impacts of elevated sea levels, harsher storms and more intense downpours, the DEO community resiliency initiative aids them in assessing vulnerabilities to projected increases in coastal flooding and in creating strategies to make their areas better able to recover quickly.

The objective — and probably the most intensive hazard mitigation project — is to make the area able to defend itself from a Category 1 hurricane, which is something St. Augustine’s seawall is capable of holding back.

“The project has been approved for the HMGP (Hazard Mitigation Grant Program) grant funding at 75 percent of the entire $11.5 million cost,” said Franklin. “The design will be funded first, and once approved, the construction monies will be allocated. So, currently the design is approved and funded.”

The city’s share of the total project will be around $2,875,000, including the design phase.

Included in the project are the installation of stormwater backflow prevention valves; the creation of a larger stormwater collection system on Cordova, Bridge and Granada streets; excavating the lake; the placement a stormwater pumping station at lake control gates; and the design of a system to protect properties along the marsh south of South Street from flooding.

When asked what projects the city was working on to protect historical/cultural resources and low-lying critical infrastructure, Franklin mentioned the installation of tide check valves on stormwater outfalls to prevent tidal waters from backing up through the stormwater system and causing flooding.

“The city is also in the beginning stages of designing a pump station and flood protection barrier for the Lake Maria Sanchez Basin,” said Franklin, whose title during the study was stormwater engineer. Jessica Beach, professional engineer, is the city’s new stormwater engineer.

While the city is taking proactive measures to address sea level rise, Beach noted that this was not the only project to address the matter.

“It’s multiple projects that are in various stages: some are completed; some are nearing completion; some are in the design and permitting stages; and others are future/ planned projects,” said Beach. 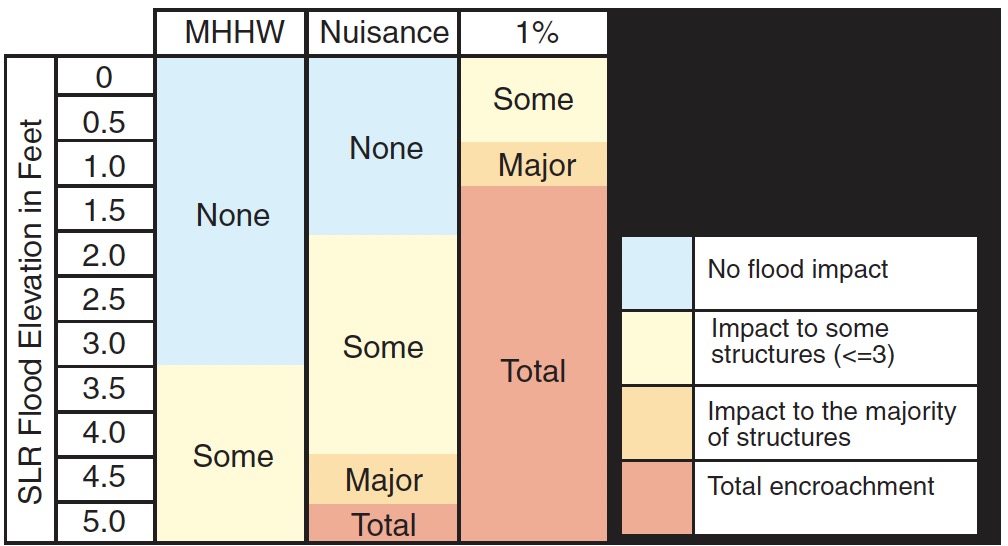 Pictured is a table showcasing the vulnerability of St. Augustine’s wastewater treatment plant to each flood type and sea level rise scenario. With 1 percent annual chance flood, the plant would be most affected. (Graph provided)

How many people were involved in the pilot study?

“There were three local governments involved — the city of St. Augustine, city of Clearwater and Escambia County. All were in Florida and our own team consisted of about 12 staff,” said Franklin. “The single biggest challenge was coming to terms with the complexity of the idea of sea level rise and how much it impacts our city.”

The city also plans to secure disaster relief funds from the U.S. Department of Housing and Urban Development, which had been awarded to St. Johns County of which St. Augustine is the county seat.

According to the “Final Report of St. Augustine — Analysis & Appendix,” three types of coastal flooding were identified for analysis in the pilot program:

Of the three types evaluated, nuisance flooding has the largest potential to impact St. Augustine in the near term. An additional 500 acres of land are vulnerable to nuisance flooding with 1 foot of sea level rise.

Because the study assessed the vulnerability of the city to these existing flood conditions with an incremental approach, this involved gradually increasing sea level bat half-foot increments to identify “tipping points” in vulnerability. The vulnerability assessment — or how vulnerability to flooding will change with SLR — objective items included:

Two intensive reports that have been made on this project were recently released a few months ago — the “Coastal Vulnerability Assessment” and the “Strategic Adaption Plan.” Both can be viewed at www.citystaug.com/government/public_works/ResiliencySustainability/CoastalVulnerability.php.