According to the National Oceanic and Atmospheric Administration, which tracks billion-dollar disasters, “2017 was the costliest year on record for natural disasters in the United States, with a price tag of at least $306 billion.” Whether its natural disasters such as hurricanes in Florida and Texas; fires in California; or train derailments in Washington, emergencies come in all forms. And when one typically thinks of first response by police, fire, health or utility professionals, they may not be aware of another crucial member of the team — procurement. Putting necessary contracts in place; purchasing equipment, vehicles, and safety gear; setting up evacuation centers and debris cleanup; and handling donations is often done by procurement professionals. 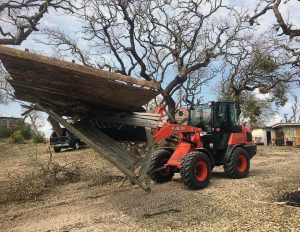 Kubota stepped up in the aftermath of Hurricane Harvey, donating $1 million in relief funds and equipment to several national and local charitable organizations. Pictured is a Kubota tractor removing debris from Hurricane Harvey. (Photo provided) 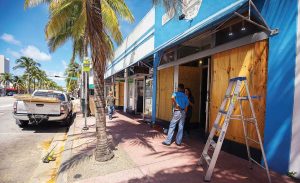 While agencies might seek out local sources, disasters might render local businesses unable to fulfill needs. In such cases, larger companies, with a national footprints, could bring in resources from other regions. Pictured are stores in Miami boarding up in preparation for Hurricane Irma. (Shutterstock.com) 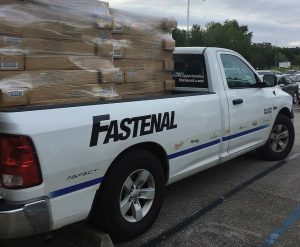 Fastenal’s Atlanta distribution center was put on notice to arrange logistics for shipping supplies to shelters across Florida in response to Hurricane Irma. Due to its wide breadth of suppliers, Fastenal was able to distribute necessary items such as batteries, cots, hand sanitizers, boots, bleach, hygiene kits and more. (Photo provided)

Public procurement operates under a set of best practices and public procurement policies to encourage competition, transparency and best value solution for the organization. However, under a state of emergency, procurement may operate under an expedited process to address the issue at hand. During an emergency, procurement has two key priorities — assisting to meet the needs of the emergency and complying with any procurement rules for future budget reconciliation, vendor payments and possible Federal Emergency Management Agency reimbursements. If you think that one is more important than the other, then think again.

According to Mike Martinet, from the Martinet Group LLC, who specializes in FEMA requirements, “In January 2017, the Department of Homeland Security issued an audit of a Southern California special district’s pipeline project, with a finding of $31,700,000, largely for its alleged multiple failures to follow the district’s own procurement regulations and those of the federal government after receiving a FEMA Public Assistance grant award of $41,300,000. Th is could result in nearly 77 percent take-back.”

Martinet explained further, “During the actual crisis, government agencies can make non-competitive (sole source) purchases or use ‘time and materials’ contracts when there is an imminent threat to life safety, public health or improved property. However, these options are only available for a very limited duration as the crisis unfolds. Once the imminent threat no longer exists, the procurement process must revert to following its own local rules and Title 2 of the Code of Federal Regulations, Part 200. The necessity of following both sets of regulations, whichever is more stringent, almost always applies to all permanent disaster related work.”

Relationships with suppliers and contract knowledge

Understanding policies is only one of procurement’s skill sets. Procurement professionals’ knowledge of the supplier community is just as crucial. Whether it’s having the right vendor contact information, fully understanding that company’s product line or being aware of the available cooperative contracts on which to “piggyback” upon, procurement has knowledge of the supplier network and contracts. During an emergency, agencies may attempt to purchase from local sources. But what happens when the disaster affects those local businesses, which no longer have the capacity or ability to respond?

Sometimes a larger company, with a national footprint, can help save the day by bringing in resources from other regions. After receiving a call from the state of Florida, Fastenal immediately sent the Tallahassee store manager and government specialist to help. With a government contract already in place, a product sourcing team was mobilized, and the Atlanta distribution center was put on notice to arrange logistics for shipping supplies to shelters across Florida. Fastenal’s wide breadth of suppliers made it possible to distribute necessary items such as batteries, cots, hand sanitizers, boots, bleach, hygiene kits, etc. However, access to inventory means nothing without the ability to distribute.

While some carriers stopped shipping into the state just days prior to the landfall of Irma, Fastenal’s Atlanta distribution center manager was able to reallocate drivers, continuing to ship supplies until the storm made landfall. Due to the weekend storm, most large manufacturers and suppliers do not typically process orders on Saturday and Sunday. As a larger company, Fastenal’s connections made it easier to contact high-level executives who, in turn, sent in special teams to work specifically on hurricane orders.

Cooperative contracting may come into play. The idea is simple — an already solicited and established contract made available for use by municipalities. A key benefit of a ready-to-use contract is the lengthy procurement process has already been done. By leveraging purchasing power across a larger number of entities, the pricing can be advantageous. Costly spikes in pricing for items such as generators and emergency supplies, which can occur during an emergency, can be avoided since the contract pricing is already set.

As horrific as emergencies might be, there is often good news to tell — of neighbor helping neighbor, first responders saving lives and companies stepping up with donations and offers of assistance. For instance, Kubota Tractor Corporation, based in the company’s North American headquarters in Grapevine, Texas, donated $1 million in relief funds and equipment to several national and local charitable organizations to aid in the Hurricane Harvey relief efforts.

Masato Yoshikawa, president and CEO, stated, “As a newly relocated Texas company, and with a large group of Kubota dealers and employees working and living in this area, we stand ready to help our South Texas and Louisiana neighbors clean up and rebuild the region.”

Donations are helpful for programs to also prevent or minimize the impact of emergencies. For example, W.W. Grainger donated 70,000 smoke alarms through the Red Cross’ Home Fire Campaign, resulting in 285 saved lives in vulnerable communities since the program’s inception in 2014.

Gail McGovern, president and CEO of the American Red Cross, recognized Grainger by saying “We could not have done much of our work without this type of financial and in-kind support.”

Coordinating donations and tracking new assets is often a role that Procurement may assume during an emergency.

One final thought and lesson learned from my own experience during the 2007 Witch Creek Fires in San Diego. As soon as the 911 call comes in and the first responders are dispatched, there is one more important call to make… to the agency’s accountant. Tracking emergency spending is important. Because at some point in the future, procurement needs to report and reconcile — for management reports, for FEMA, for vendor payments and even media requests. And the best way to keep track is to start at the beginning!

Tammy Rimes, MPA, is a procurement consultant and executive director of the National Cooperative Procurement Partners, or NCPP. She was the former purchasing agent for the city of San Diego, serving in that position during the 2007 Witch Creek Fires in Southern California, which raged for 17 days, with an ultimate cost of $18 million, and burned an area of 200,000 acres, including over 2,000 homes and structures. More information on emergency preparedness, including a first-aid kit and free webinar series, is available at www.nationalcooperativeprocurementpartners.com.