As technology rapidly evolves, firefighters are among those who have to stay on top of the ever-changing landscape, and in this day and age, that means becoming very educated on the ins and outs of electric vehicles.

As of November 2016, it was estimated that there are nearly 2 million electric cars on roads across the world, with more than 500,000 of those located in the United States alone, as well as millions of alternative fuel vehicles and hybrids also populating the roadways.

The growing variety of cars on the road greatly impacts the way firefighters operate when responding to vehicular accidents and fires.

“The protocol remains the same as far as personal protective equipment, air packs and breathing apparatuses, but other elements change when taking electric cars into consideration,” said Chief Bob Herber of the Cecil, Ohio, Volunteer Fire Department. “On electric cars, since the batteries are usually encased in the middle of the car, it’s tough to get to and takes a lot of water to handle.”

Herber said while a typical vehicle fire calls for between 500-600 gallons of water, an electric car fire could require up to 3,000 gallons or more. This is for a variety of reasons.

“The science behind it is that an endothermic reaction is taking place, which builds up heat rapidly,” he said. “If you don’t dissipate the heat, it’ll catch fire all over again. You might be putting water on the electric cars for a half hour or more, whereas a traditional car could be handled in five to 10 minutes. It takes more time and attention to detail to ensure electric car fires are extinguished.” 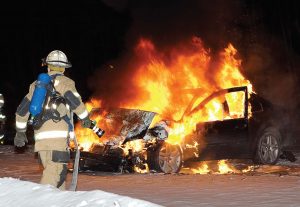 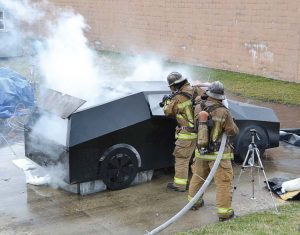 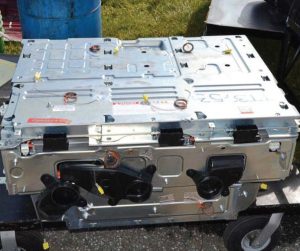 EV batteries can take up the entire bottom of the car or trunk, impacting the entire car with heat while also creating a challenge when trying to cool down the battery. (Photos provided) 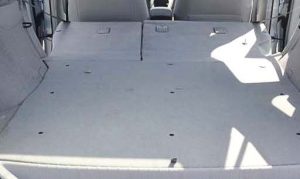 EV batteries can take up the entire bottom of the car or trunk, impacting the entire car with heat while also creating a challenge when trying to cool down the battery. (Photos provided)

Lt. Chris Womock of the Indianapolis Fire Department said the reason electric cars are so tough to cool down is the anatomy of the vehicle.

“In a lot of electric vehicles, the entire bottom of the car or trunk is the battery. That means the whole car is impacted by the heat and that entire casing needs to be cooled down before the car is extinguished,” he said. “These cars have been known to catch on fire again after being extinguished or even after a standard accident because of the longterm heating elements in the casing.”

The real key, Womock said, is to understand that each call involving an electric vehicle presents a unique situation. “You can’t just follow standard procedures anymore,” he said. “There’s no one plan for dealing with electric cars, hybrid or alternative fuel vehicles. You have to read the situation and use the tools and training provided to you to make the best call you can at the time.”

Herber, who hosts trainings for his fire department, said he stresses this lesson while he teaches.

“I cover electric cars in depth in my classes,” he said. “This is still a relatively new animal for us. Not just the electric cars, but the propane- fueled, hybrids and alternative fuels. There’s a learning curve, but the information is out there — you just have to look for it.” Herber said he advises his students to look for clues on the car to determine what sort of vehicle it is.

“Some cars have a distinct look and you know it’s electric without much investigation,” he said. “Others, you need to look for wording on the car itself to know. Look for emblems, words like ‘synergy’ or ‘hybrid,’ and check under the hood for stickers. You can even check the gas cap for clues. When in doubt, if you’re able, you can also ask the owner of the car.”

Womock, who also teaches courses across the country, said the most important factor is to assume every car is an alternative vehicle until it’s known for certain it’s not.

“I tell people to treat every car like it’s an electric, hybrid or alternative fuel vehicle until you can prove otherwise,” he said. “Never assume anything. There are so many factors to take into consideration, so make sure to get some training and use the tools you gain through that — every situation will be different.”