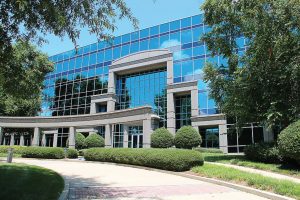 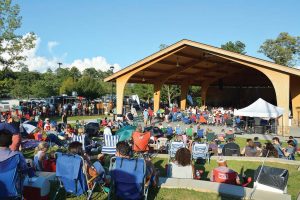 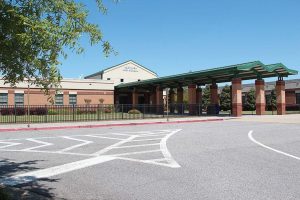 Its stellar schools are just one reason people are flocking to Johns Creek, Ga. Pictured is Northview High School, which U.S. News & World Report has ranked eighth within the state of Georgia. (Public Domain via English Wikimedia Commons) 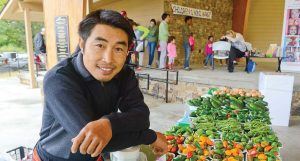 A vendor has set up shop with fresh vegetables at Johns Creek’s farmer’s market, which was held last summer at Mark Burkhalter Amphitheater at Newtown Park. (Photo provided)

With a nationally ranked public school system, premier municipal services, a wide range of housing options and commercial enterprises as well as a diverse population of residents who call it home, it’s no surprise that Johns Creek, Ga., has been named one of the “50 Best Places to live in America” for the second year in a row.

“I wish I could take credit for that distinction in some small way, but I can’t,” Johns Creek Mayor Mike Bodker said. “Johns Creek is a great community with great people. I always say when you are in Johns Creek, you are in a little bit of paradise.”

Located in Fulton County along the Chattahoochee River, Johns Creek was a picturesque suburb of north Georgia that enjoyed a reputation as a social and educational hub of the Atlanta region. It was the schools that encouraged families like Bodker’s folks to settle in the area and was the reason Bodker choose to live next door to a brand-new elementary school when he became a parent himself.

“Everyone wants a great education for his or her kids, and the schools of Johns Creek are the best of the best,” he said. “We have four high schools that are all ranked in the top 20 nationally, and two of those schools are in the top 10. We also have some of the best private schools in the state, which attracts a broad spectrum of residents to the area. Great schools bring great people and that makes for an exceptional city.”

In 1981, a group of graduates from the Georgia Institute of Technology purchased 1,700 acres for a mix-use/industrial park that became known as Johns Creek and home to a number of Fortune 100 companies. The space encouraged additional development in the area and the desire to incorporate as an autonomous city. After nearby Sandy Springs achieved cityhood in 2005, the grassroots effort to incorporate Johns Creek reached a fever pitch. In March 2006, the bill to incorporate passed legislation and was signed by former Gov. Sonny Perdue. The first community officials were elected in November, and on Dec. 1, 2006, the city of Johns Creek began operations.

Johns Creek was approximately 80 percent developed by the time it became a city, so it was not as if it had a blank canvas upon which to draw. However, it was allowed to start its various departments from scratch and was able to create the kind of city residents envisioned as opposed to revamping an existing system.

“That was key,” Bodker said. “We were very deliberate in the kind of people we hired to put these entities into place. We wanted folks who would work tirelessly and with intention to help build the kind of city in which we could take pride.”

As a result, Johns Creek is one of the safest cities in the state of Georgia, a distinction that Bodker wears with pride. When the Johns Creek Police Department was launched, Bodker challenged each officer to model the behavior they expect from the public. No matter if they were on or off duty, he wanted the residents of Johns Creek to see their officers as the very backbone of the community. “I want them to treat people, who may be in the middle of their worst moment, in the best possible way and to respect them as human beings even if they are not being respectful in return. Believe me, it makes a big difference in outcomes.”

The JCPD has achieved the accreditation of Excellence through the Gold Standards Process by the Commission on Accreditation for Law Enforcement Agencies. According to a press release, there are approximately 18,000 law enforcement agencies in the nation and only 3.7 percent achieve accreditation through CALEA. The prestigious Advanced Accreditation with Excellence distinction is awarded to only 10-12 percent of the accredited agencies.

“That means a lot to us,” Bodker said. “It means that our police department upholds the highest standards. If one of our officers has to draw his or her weapon, it has to be noted with an explanation as to what happened. In every incident, I am pleased to say that no weapon was ever discharged.”

Another thing that sets Johns Creek apart is the vested interest each resident feels to the community. As one of the wealthiest cities in the state, Bodker joked that Johns Creek is the Beverly Hills of Georgia, but even with its considerable resources, those in city government have to be good stewards of every penny. One of the reasons citizens wanted autonomy was in order to have a stake in the continued growth of the community so they pay considerable attention to how their taxes are administered.

“The citizens of Johns Creek are wealthy. The government is not. In fact, about half of the people who work with the government are not on the payroll. We have developed a number of private and public partnerships that are more cost effective than hiring additional employees,” he said.

Over the past few years, Johns Creek has doubled its city park system and has invested in streetscape beautification efforts that add ambiance to the area and continue to make it an enviable place to call home. Johns Creek has a different feel to it, and that feeling is very deliberate on the part of the people who love and work there.

“Naturally we are not perfect. We have our share of negative elements that affect society at large, but we are working to identify and eliminate those problems in an effective manner. One thing is certain, when the residents of Johns Creek harness their energy, they are unstoppable,” Bodker said.

The city of Johns Creek, Ga.