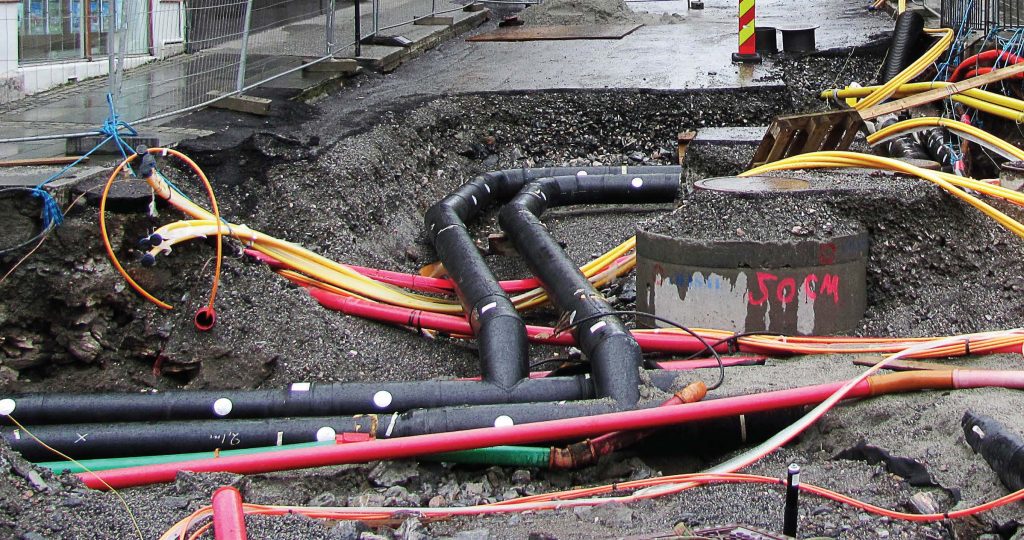 With utility lines being intertwined and jumbled together,
the underground network can already be messy and confusing. It’s
important to record all the correct information to avoid that confusion,
which could lead to larger problems. (Shutterstock.com)

The potentıal dangers that lie just beneath the ground can no longer be ignored. As facilities have turned to implementing more and more underground utilities, they’ve begun to encounter not only abandoned utilities but unmarked ones, as well — leading to the danger of mistaking an unmarked line as abandoned when it could very much be alive. The unfortunate part of this situation is that there is still a great lack of awareness and concern over how it can impact construction workers and nearby residents. 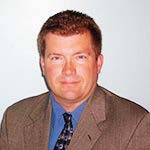 Lack of communication creates gaps in imperative information and unnecessary confusion. The best methods for handling abandoned utilities relies heavily on solid communication of accurate information from all parties, which includes line descriptions or adding abandoned utilities into mapping systems. Without communication there’s room for small mistakes, resulting in construction project delays and perilous mistakes, which could fatally harm contractors and local residents.

Nonprofit organizations in several states are working to bring awareness and help to the issue of abandoned utilities. These organizations strive to prevent utility damage while bridging the gap in communication. One call and 811 systems are available in several states to inform people about the laws on digging and caution everyone to contact them or a locator before digging. 811s exist specifically to assist with utility locating, information, marking and more. Places like the National Utility Locating Contractors Association in Kansas City, Mo., also have experts with over 20 decades of experience in the industry. These kinds of organizations network together with the American Public Works Association to stay on top of this growing issue.

“When you’re dealing with abandoned utilities from the perspective of encountering them, it would be best to have effective communication with the locators,” commented Ron Peterson, executive director of NULCA. “Information is power in damage prevention so the more information we can give to the person who’s digging, the better off we are.

“Unfortunately, some utility clients don’t want to provide key information, such as the live facility being a 4-inch polyethylene line. They just put a paint mark on the ground, which doesn’t give much information. If you can get more information before you start your excavation, as far as what the construct and size of the utility is, that’ll help you ahead of time.”

Having been involved in the industry for a while, Peterson has witnessed quite a lot in his time. He recalled a situation years ago when a contractor had a locate request in an urban area. After the locators had marked the lines, the contractor began digging only to discover there weren’t just two lines of gas and water but a third unknown line. All three were of similar size and make, which resulted in confusion in trying to tell them apart. 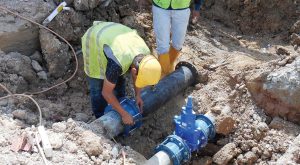 Abandoned utilities reduce the available underground space, hinder live facilities and may contaminate the soil if they aren’t properly taken care of. (Shutterstock.com) 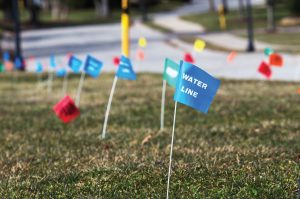 Marking utility lines above ground isn’t always enough. Sometimes the diff erent lines can be of the same build, which doesn’t help the contractor. Every available piece of information should be accessible to avoid any delays or other issues. (Shutterstock. com)

The contractor connected with the gas and water companies to discover which of the lines were live and which one wasn’t. Unfortunately, they were given bad information that resulted in them cutting through a live gas line. While no one was hurt, it showed the potential danger of what could’ve happened due to the companies not taking the initiative to work with the contractor.

“I think part of the problem we come into in this society is that everybody is so litigious and afraid of litigation that they’re not willing to step up and make the judgement or do the research to verify whether a line is live or not,” Peterson explained. “They’re afraid something’s going to come back on them when it should be more about working together. They don’t want to step out there and say they don’t know which line is live and which isn’t, which results in protecting all the lines. That poses as a problem if that line is going through the path of a proposed sewer line, which has to have a very specific location. It’s all communication related.”

He went on to elaborate as to why some lines hadn’t been mapped. “There’s motivation in telecommunications, for example, to not put them on the maps. A lot of times their taxes and tariffs are based on mapping. If they include a private utility on there, they may have a higher tariff or tax. So sometimes we work against what’s right for the industry by putting these taxes in and making it less desirable when we should be making it more desirable to map them.”

The lack of effective communication doesn’t just fall on one particular party. Everyone, from the municipality to the contractor to the locators to the facilities, can be to blame for bad communication, which is why organizations like NULCA and 811 exist. Communication and working together is necessary especially when it can minimize the chances of detrimental damage.

Municipalities can work with their utility providers by listening closely and updating their mapping systems of not only known live lines but also abandoned lines, as that knowledge will be beneficial in the future. They can also become a part of one call systems, along with other organizations, to be kept in the loop of shared and up-to-date information on live and abandoned utilities.

Looking into the future of the underground 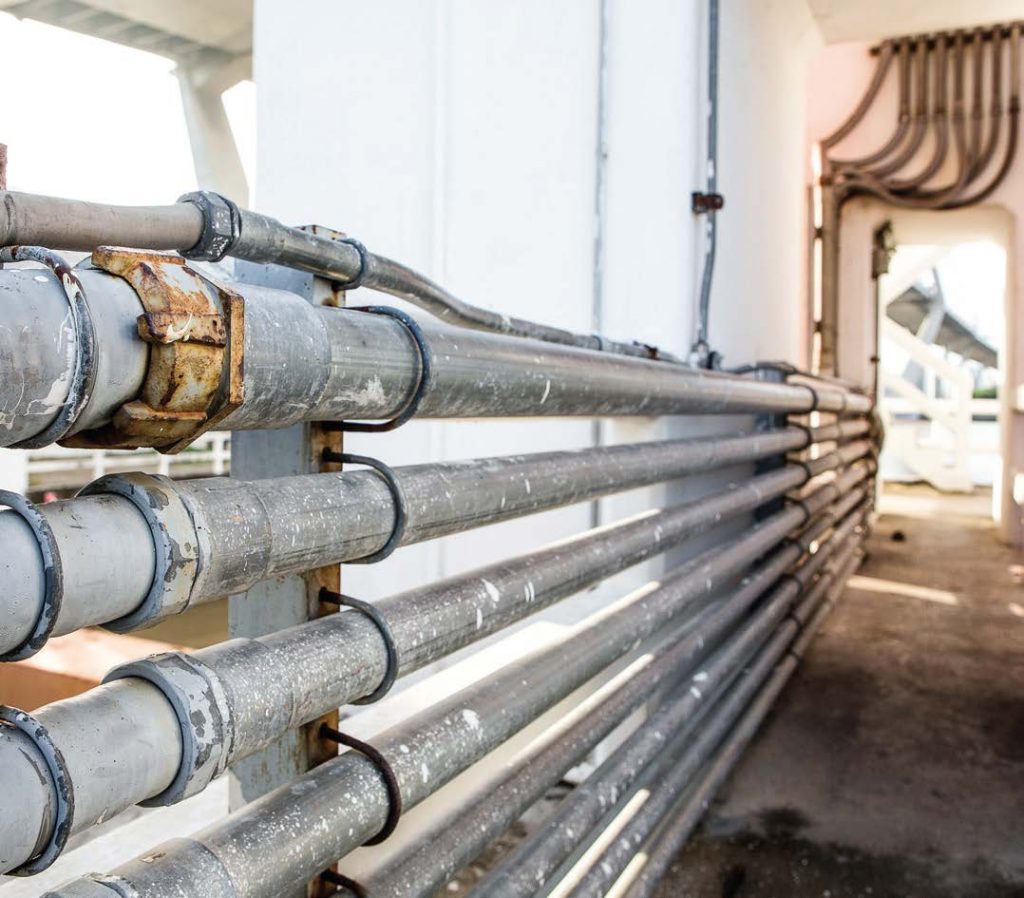 To avoid future issues with abandoned utilities, communicate to all parties and get in contact with the state’s 811 organization to become better informed. (Shutterstock.com)

Addressing the problem of abandoned utilities is still in its infancy. There’s still an overwhelming amount of places that don’t see the importance yet, which could cause even more problems in the future if actions aren’t taken as soon as possible. It shouldn’t take a death, explosion or property damage to realize that more facilities are going underground — meaning there will be more interaction with abandoned utilities as well as problems for new lines, systems and right of ways.

With thousands of miles of abandoned facilities that aren’t accounted for, it’s a strenuous challenge to locate and take care of, but it’s possible. Abandoned utilities can be resolved through mapping systems, removal of the utility or the possibility of another facility taking it over.

Peterson shared a particular situation where communication created a great opportunity. When a gas company decided to abandon a 4-inch steel line in an urban area, it let that information be known. Since that information was in the open, a telecommunications company was able to buy the facility and use it as a conduit. The company repurposed the gas line and made the abandoned facility active in a different way.

“In 1979, there weren’t a lot of underground utilities so people just took it for granted,” said Peterson. “Now we have more going into the ground with different types, like fiber optic cables and steel lines. That’s going to continue to be a problem. We need to be addressing this to stay ahead in keeping our excavators and public safe.”