Ísafj örður, Iceland, decided to get creative when it came to catching the attention of drivers with its new 3-D pedestrian crosswalk. (Shutterstock.com) 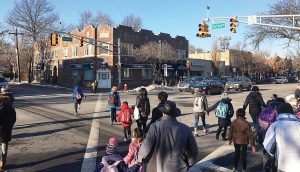 After a tragedy, Leonia, N.J., made a decision to turn a busy intersection into an all-red phase traffic signal. The signal stays red in all directions for 26 seconds every few minutes. (Photo provided) 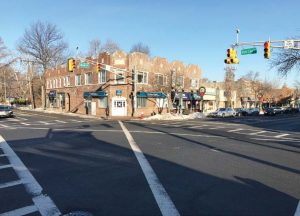 Very few people have complained about Leonia, N.J.’s, all-red phase traffic signal at the intersection of Broad Avenue and Fort Lee Road. Some have suggested that the wait time of 26 seconds should be reduced; however, most agree the wait is a small price to pay for pedestrian safety. (Photo provided) 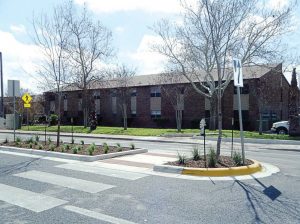 Pedestrian safety islands are another design that cities are choosing to install. Small updates can also improve safety, such as clearly painting crosswalks and checking that both street signals and walk/ don’t walk signs are operational. (Photo provided by National Association of City Transportation Officials)

According to a report released from the Governors Highway Safety Association, the number of pedestrians killed in traffic in 2016 was nearly 6,000. That’s the highest number in more than two decades.

While some of this can be attributed to pedestrian distractions like cellphones, the high number is also hypothesized to be related to a stronger economy and, therefore, more people being able to afford vehicles and being on the road. Regardless of the reason for the increase, pedestrian safety, especially in high-traffic locations, has long been a concern of municipalities.

While methods such as raised intersections, mini roundabouts and pedestrian islands are regularly used to ensure pedestrian safety, some towns are taking a more dramatic approach.

As reported by mymodernmet.com, in the small fishing village of Ísafjörður, Iceland, a 3-D pedestrian crossing was painted in an effort to slow traffic on a narrow street. The eye-popping illusion gives the effect of walking on air as pedestrians move from one side of the street to the other.

Citylab.com tells the story of Eerbeek in the Netherlands, which rolled out a crosswalk that glows like the keys to a giant piano. The six-striped pathway, located on a village street in a shopping district, relies on energy-efficient LEDs to brightly illuminate a pedestrian crossing.

Back here in the states, a number of areas have created pedestrian safety initiatives, including one instated by Governor Andrew M. Cuomo of New York.

In June 2016, he announced that pedestrian safety improvement projects were beginning on roads across the state as part of a $110 million multi-agency initiative to utilize engineering, education and enforcement campaigns to enhance pedestrian safety across upstate New York and Long Island. The plan strove to reduce pedestrian fatalities in the state by 20 percent by 2021.

And the fight for pedestrian safety doesn’t end there.

A tragic story out of Leonia, N.J., of a woman being struck by a car at a busy intersection and then dragged more than 70 feet to her death led to major reform in the town. The intersection also sits near an elementary school.

“Because of where we’re located, we get a lot of traffic through our municipality,” Leonia Mayor Judah Ziegler said. “The level of traffic got to a point where it had increased so much and became so aggressive that we had a number of traffic/pedestrian accidents and unfortunately a tragedy. Something had to be done.”

Ziegler outlined a number of instances where school crossing guards had to hurl themselves in front of vehicles to prevent children from being struck and spoke of the concerns of residents across the town.

Now, that particularly busy intersection has a solution that hasn’t seen a single pedestrian-motor vehicle accident since its implementation: an all-red phase traffic signal.

The signal stops traffic in all directions for 26 seconds every few minutes, allowing pedestrians ample time to cross without danger. According to a USA Today article, Chief Thomas Rowe of the Leonia Police Department said seniors, who can take longer to cross the road, and students benefit the most from the all-red cycle.

The solution, though not as dramatic as an art installation or new infrastructure, has done its job.

“There have not been any pedestrian accidents since implementation,” Ziegler said. “And, other than new signage, we haven’t really had to re-train drivers. It’s been a smooth transition.”

Ziegler said there hasn’t been much backlash from drivers about the implementation, aside from those who suggest that 26 seconds is too lengthy.

“Our job is to legislate for all residents — drivers, bikers, walkers and everyone in between,” Ziegler said. “So I tell people they’ll have to get used to the 26-second wait. It’s a small price to pay for everyone to use the crosswalks safely.”

When talking about pedestrian safety, Ziegler said anything a municipality can do to ensure the safety of its residents is an easy choice to make.

“There’s no downside to this,” he said. “Obviously, you want to take a look at your traffic pattern and flow, but there isn’t a significant reason not to look into pedestrian safety elements.”

Ziegler mentioned that making sure crosswalks are painted clearly, street signals work and walk/don’t walk signs are operational is also part of the overall solution.

“When people hear about suggestions like this, they think it’s really simple and a nobrainer,” he said. “Sometimes we overthink problems, but it’s all about taking a step back and seeing what the core of the issue is. A few simple updates to crosswalks sounds like a simple solution, but sometimes the simple solutions are best.”