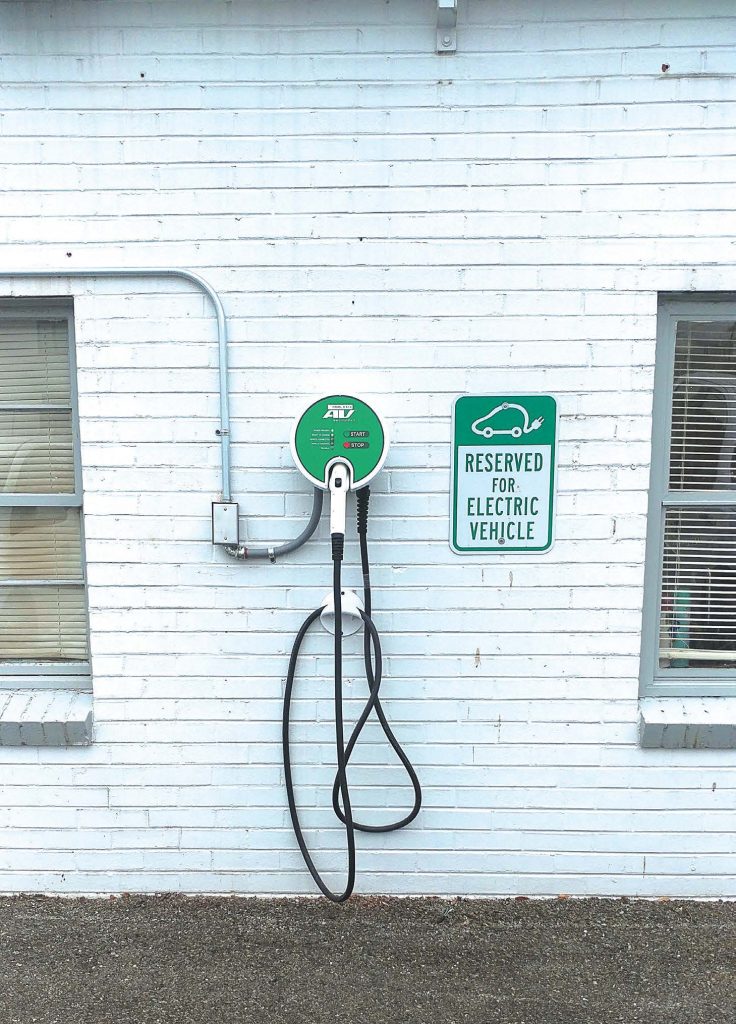 With 12 electric cars currently in use, the city of Roanoke, Va., has installed charging stations to keep them going. If the program continues to show promise, the city may increase the number of electric vehicles to as many as 20. (Photo provided)

In a world that’s always looking for better, faster and smarter solutions, another must-have has been added to the checklist: environmentally conscientious.

From encouragement to recycle or compost food waste to porch lights on timers, awareness of water waste and trends like Meatless Mondays, the nation has taken note of the impact of its carbon footprint for long-term sustainability and has responded.

The nationwide shift in mindset has not been lost on municipalities. For years, city officials in Roanoke, Va., have been researching greenhouse gas emissions with citywide reductions in mind. Small changes, like switching bulbs in municipal buildings and traffic lights to LED, have been enacted while larger changes are in the works.

“Back in 2007, we started looking at different ways to do things,” Sustainable Outreach Coordinator Nell Boyle said. “We’ve experimented with biodiesel, bought a few hybrid and electric vehicles for various city needs and small things of that nature.”

In early 2018, Roanoke officials committed to adding electric vehicles to the city’s fleet to replace gas-guzzling SUVs and sedans.

“This is our first real big push to move toward a cleaner alternative fuel,” Boyle said.

In the initial phase of the pilot program, the city worked with a local car dealership to buy low-mileage, used Nissan Leafs to add to a pool of vehicles shared by city employees for official business.

“We looked at all the cars that needed to be replaced in 2018 and particularly those that had very low usage and noticed they were mostly larger vehicles or SUVs,” Boyle said. “It occurred to us this might be a good opportunity to invest in electric cars.”

There are 12 cars currently in use in the pool. According to Boyle, 10 of the vehicles cost $92,325 total while the two other cars, dedicated to individual staffers, cost the city $14,300 each. Both were almost-new demonstration cars with less than 300 miles.

The switch is estimated to save the city $150,000 in vehicle replacement and fuel costs while also reducing energy and maintenance spending by 80 percent, Boyle said.

If all goes well, the city may increase the number of electric vehicles to as many as 20.

“We’re always looking for ways to reduce cost,” Boyle said. “But if we can do that and lower our environmental footprint at the same time, that’s even better. It’s exciting to find ways to create efficiency and not only save money but do the right thing to save the environment.”

In Savannah, Ga., Sustainability Director Nick Deffley, MPP, is working with partners across the city to plan the eventual implementation of electric fleet vehicles and solar charging stations. The city has committed to having 15 percent of the city’s fleet powered by alternative fuels or hybrid technology by 2023.

“We had to figure out which of our fleet vehicles are appropriate for conversion,” Deffley said. “This year, we’ve dove into strategy for determining which vehicles would be good candidates and are trying to hone in on specifics. We’ll be completing that process in the next few months.” 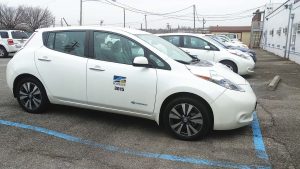 Roanoke, Va., has invested in low-mileage, used Nissan Leafs as part of its eff orts to replace gas-guzzling SUVs and sedans. The switch to electric is expected to save the city $150,000 in vehicle replacement and fuel costs while also reducing energy and maintenance spending by 80 percent. (Photo provided) 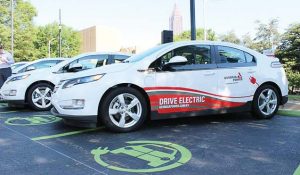 Savannah, Ga., is also welcoming electric vehicles, with a commitment to have 15 percent of the city’s fleet powered by alternative fuels or hybrid technology by 2023. (Photo provided)

Deffley said factors such as mileage, use pattern and overnight parking location have been researched, and they’ve identified about eight vehicles that could be the first to convert.

“We will be implementing a program in the city where we’ll have a few electric vehicles to use in a variety of capacities to get a sense of how this would work logistically for us as well as what the savings would look like for both fuel and maintenance,” he said.

The city will likely lease vehicles so as to be able to easily stay on top of shifts in technology as electric cars become more popular and improve year after year.

“As technologies and battery life improve in electric fleet vehicles, we want to keep on top of that,” Deffley said. “Leasing gives us the flexibility to do so.”

In addition to the shift in fleet vehicles, another major implementation within the city will be solar charging stations available for both public and fleet-only use.

“We’re really buckling down into infrastructure and what it will actually take to make the charging stations a reality,” Deffley said. “We want to provide both simple stations used just for fleet vehicles as well as larger stations that collect more data and are open to the public. We’re figuring out what that mix will look like for us.”

While the shift to electric cars sounds like a no-brainer, any sort of large-scale change requires some coaxing, according to Boyle.

“Getting everybody comfortable with the switch is a challenge,” she said. “We’ve done a lot of homework to make this a seamless transition, but we’re still seeing how this will work for everyone. We’re trying to be flexible and understand the pitfalls. That’s why we’re doing this incrementally, so we can tweak and adjust as needed.”

In all, Boyle said the behind-the-scenes work that goes into a shift of this magnitude is worth it.

“You’re putting a small dent in a big problem of pollution right there in your own community,” she said. “That’s a big deal.”