Cycling to work is the ultimate return to childhood’s happy days. And it saves on gas and vehicle wear and tear while promoting fresh air and the carefree exhilaration you enjoyed back in the day when your bike could take you anywhere.

Many municipalities are encouraging resident to pedal around town versus driving by welcoming bike-sharing programs. Companies like Zagster, LimeBike and Social Bike, for example, have been cropping up in cityscapes and are doing very well with their bikes and docking stations.

Bike-sharing is so popular that cities would do well to have a plan for vandalism and theft. According to Parks & Recreation Director Chris Jenkins of Hastings, Minn., his city’s bike-sharing program has been in operation since late June of 2015 and, to the best of his knowledge, hasn’t experienced any outright theft. 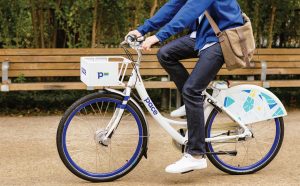 A cyclist tries out a new Pace bike. Bike-sharing services are proving popular with both residents and cities alike across the U.S. (Photo provided) 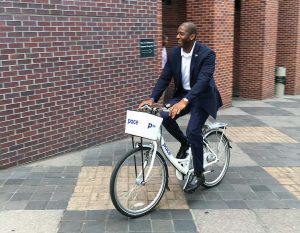 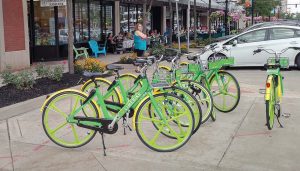 A bright shade of lime green, LimeBike’s bicycles have proven to be a welcomed addition to South Bend, Ind. In less than six months, LimeBike saw 200,000 rides. (Photo provided) 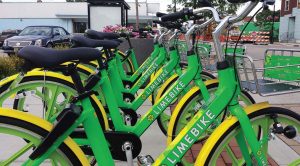 Should an act of vandalism or theft occur, LimeBike would handle the situation as per its agreement with the city of South Bend. (Photo provided)

“There have been some issues with vandalism, however,” said Jenkins, who noted policies exist to handle these situations and include:

“Overall, the experience with Zagster is very positive in this regard,” said Jenkins “They work hard to get the bikes repaired and back into service as quickly as they can. Our staff involvement is pretty minimal when the system is up and running, and most of our time is spent pre-season in the marketing/awareness effort.”

If one had parked the bike-share bicycle outside a library, for instance, and returned to find the bike fenders smashed and paint strewn liberally over it, what would be the procedure for restoring it?

“In our situation, the rider would report the issue to Zagster, which would then pull that unit out of service until such time its contracted mechanic can come to the docking location and deal with the repairs/ maintenance,” said Jenkins. “Our community does not have a bike shop from which Zagster can pull independent contractors so they come from communities around the metro area, and they usually work a full-time job somewhere, so their response time has limitations.”

Jenkins noted that other incidents could come from stolen bike seats, stolen bike front racks or bikes having been ridden too hard or used in a manner for which they aren’t intended, such as a young adult abusing a bike because it wasn’t personally owned.

For approximately five years, Charlotte, N.C., has been using B-cycle for its bike-sharing program, according to program Executive Director Dianna Ward, who noted that her city has had zero thefts and almost minimal vandalism.

“Occasionally we have someone slash a tire,” said Ward, adding that this happens maybe once or twice per year.

“When we need new equipment, we order it directly from either B-cycle or QBP (Quality Bicycle Products). With respect to sponsors, we are sponsored by Blue Cross Blue Shield of North Carolina, and they have sponsored us three times for a total of $4 million for 10 years from 2012-2022. We have also been sponsored by the local hospital system Carolinas HealthCare System to the tune of $75,000 for 10 years. I would say since both of them have continued their support that they are happy.”

Kelly Goldthorpe is the director of marketing and rider experience at Motivate, the operator of Divvy Bicycle System, which is Chicago’s bike-share system.

“Like any public good, Divvy does experience some misuse of its bikes,” said Goldthorpe. “Our technology lends lots of accountability to the system, though — we know when a rider takes out a bike and when the rider returns it. They are accountable for overage and loss fees. That means that even bikes that make their way out of the system for a short time typically return home before too long. In addition, our incredible bike repair and rebalancing team work in tandem to identify bikes that need tune-up or repair, to send them back to the shop and get them back in rotation as quickly as possible so that bikes stay available where you need them and when you need them. One last point: The bikes are not easy to steal — at 44 pounds, they’re heavy and their shape and color make them iconic.”

South Bend, Ind., has also added a bike-share service for its residents since last July, according to Chris Dressel, AICP, planner and bicycle coordinator.

“The city of South Bend has entered an agreement with LimeBike, and they are the owner and operator of the city’s dockless bikeshare system,” said Dressel.

“The success of the program here is undeniable as we’ve achieved more than 200,000 rides in less than six months, and per the agreement, it is LimeBike’s responsibility to address vandalism or theft that might be occurring through their local staff, including any cost that results. The result of this arrangement is that reports of vandalism/theft are made directly to LimeBike. At best, the city involvement is to relay these reports to LimeBike via their customer service (representative) or direct customers to do the same.”

Nathan Hasse, South Bend’s operations manager, agreed, saying, “Though we have seen some vandalism or theft in the South Bend/ Notre Dame area, it will not discourage LimeBike from bringing mobility and accessibility to those who do not have easy access to it.”

Zagster just launched Pace, its new dockless service for cities and colleges, according to Jon Terbush, communications manager at Zagster. “All our Pace bikes are five-speeds, except for our adaptive bikes. And our bikes are a unisex, step-through cruiser model.”

He added, “The bikes all look the same for the most part, but the branding is tailored to each city to add local character. So for each program — Pace Tallahassee, Pace Albuquerque and so on — there are long and short banners to incorporate the name and color scheme of each city.

“Regarding theft and vandalism, Pace features a two-point security system to ensure bikes lock to fixed objects — not just to themselves — to mitigate theft and abuse and preserve public right-of-way,” Terbush said.

“All other dockless bikes only lock to themselves, using a ring lock that secures the rear wheel so a bike can’t be rolled when not in use. Of course, this means bikes can still be picked and moved anywhere — thrown into bodies of water, hurled through storefronts, dumped all over residents’ lawns or abandoned in any other place you wouldn’t want a bike to end up. Pace bikes feature not only a ring lock, but also a security cable that tethers bikes to our bike racks or public bike racks when not in use. This makes our bikes much harder to steal or vandalize than our competitors’ offerings.”

Another thing Terbush noted was that in addition to the locking tech, Pace also features high-quality bikes and are a proprietary design built off the Breezer Uptown, a multi-time winner of Bicycling Magazine’s “Editor’s Choice” Award for best commuter bike.

Likely, more cities will be joining the movement, and with bike-sharing services handling the bulk of operations and maintenance, it can be a fun added service for residents without overwhelming city staff with one more task.