↓
Home→Streets, Highways, & Bridges→U.S. embracing the ‘ins and outs’ of roundabouts 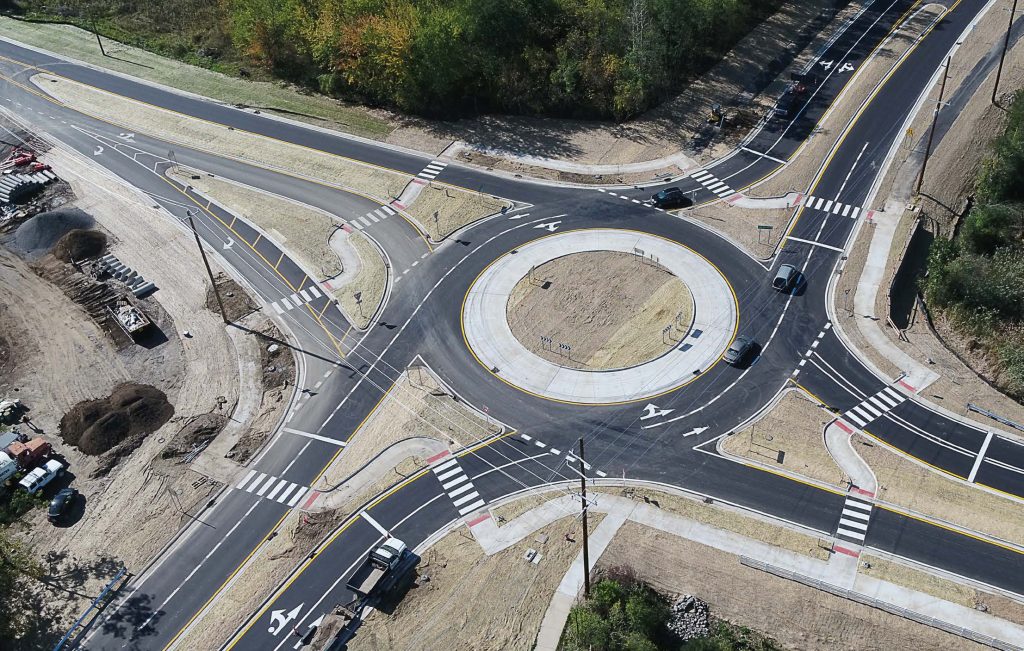 Safer and on the rise in popularity, roundabouts cost about the same as a signalized intersections when there is a large already-built intersection that needs to be reconstructed. Pictured is the 10 Mile/ Napier roundabout in Michigan. (Photo provided by Traffic Improvement Association of Oakland County)

Traffic circles, rotaries, roundabouts — call them what you wish, but get used to them. The popularity of roundabouts in the United States has increased in the last few decades, and they’re not going anywhere anytime soon.

Roundabouts are recognized across the board as one of the safest types of intersections a city can have, but that’s not the only reason they’re popping up more and more frequently across the nation. According to data from the Federal Highway Administration, the conversion of signalized intersections to roundabouts not only decreases traffic-related fatalities by 90 percent, but increases road capacity by 30 to 50 percent.

“People tend to die at intersections one of two ways: head-on collisions or broadside crashes. Roundabouts virtually eliminate the possibility of those two types of accidents,” said Craig Bryson of the Road Commission for Oakland County in Michigan. “Of course, we like them for safety, but secondly, if we can increase road capacity by building a roundabout and not having to widen the road, that’s a huge savings for us.”

Minnesota Department of Transportation Safety Planner Derek Leuer agreed, citing the construction of the roundabout itself as the reason behind the safety benefits.

“For high severity crashes, right angle crashes — or T-bones and broadsides — tend to be the deadliest. Due to the geometry of a roundabout, you can’t have these types of crashes because the angles are too shallow,” he said. “Typically roundabouts are designed in such a way that as drivers approach them, they tend to slow down naturally. Any crashes you do have in a roundabout are at a low speed and shallow angle.” 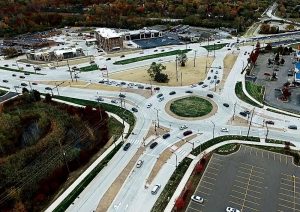 Roundabouts reduce high severity crashes; in fact, the Federal Highway Administration found that the conversion of signalized intersections to roundabouts decreased traffic-related fatalities by 90 percent while increasing road capacity by 30 to 50 percent. Pictured is the Northwestern Connector in Oakland County, Mich. (Photo provided by Road Commission for Oakland County)

While some states are just starting to enter the realm of roundabouts, others have long been implementing the practice and have it down to a science. Bryson said Oakland County now has 22 roundabouts, and they started constructing them in 1999. Minnesota is newer to the roundabout game, but Leuer and Bryson agree: the cost of roundabouts isn’t significantly different than signalized intersections.

“Every year, we look at intersections with a crash history or traffic flow problem and work to improve them,” Bryson said. “We’ve found that reconstructing these intersections into roundabouts end up being about the same cost as it would be to add lanes or widen the road. It’s really not proven to be more expensive than another alternative.”

Leuer explained how many cities can work with what they already have to keep the cost of roundabout implementation lower.

“While one of the biggest hurdles is cost, if you have a large intersection that’s already built that you need to reconstruct anyway, it costs about the same to turn that into a roundabout,” he said.

Factors such as safety, natural life of the intersection, traffic volume and characteristics, the land around the intersection and daily usage are taken into consideration when determining whether a roundabout is the right fit.

Once construction begins, Leuer said, an education campaign is launched to teach the community how to properly and safely use the new traffic feature.

“We host open houses to try to get people in the community out to look at and understand the roundabouts. We use table flyers at restaurants, videos on local public access channels and social media campaigns to spread the word,” Leuer said. “One of our counties even built a mock roundabout in the parking lot of a mall and residents could come ride in golf carts to learn how it operated.”

On a larger level, both Bryson and Leuer noted programs designed specifically for senior citizens and new drivers that teach roundabout driving and safety. 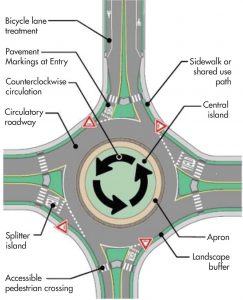 Here is a potential roundabout design that showcases how different features can be integrated into a roundabout, including bike lanes and accessible pedestrian crossings. (Photo provided by Minnesota Department of Transportation)

“While we do press releases and public information meetings, we also work directly with the AARP to get roundabout information to the senior driving classes our county offers,” Bryson said. “We provide information to every student driving center we can find in the county and will go to any location that will have us to talk about the implementation in person.”

Minnesota implements many of the same practices, and Leuer said as the years go by, residents have grown more fond of roundabouts.

“Roundabouts can be intimidating, but it seems that as we build them and people use them, they like and understand why we’ve incorporated this feature,” he said. “We’ve begun to turn a corner where cities and communities are asking for them instead of us pushing the topic.”

While roundabouts are a functional necessity, they can also serve as a beautification element in communities. These efforts are typically created and funded by communities themselves.

“Communities will install gardens, trees or landscaping to the center of the roundabouts to serve as a gateway to the city,” Bryson said. “As a road agency, we don’t use roundabouts as beautification efforts, but we work closely with communities, and if they’re willing to do it and pay for it, we’ll work with them to facilitate it.”

It’s not uncommon to see signage, sculptures, small gardens and other landscaping efforts at the center of local roundabouts.

With the increasing popularity of the traffic feature, Leuer cautioned cities to use the resources they have and realize bigger isn’t always better.

“With roundabouts, we’re really seeing that single lane options not only circulate the best, but also tout the best safety benefits,” he said. “As you build roundabouts bigger, we start to see more crashes, higher severity crashes especially. Single lane roundabouts can handle more traffic than people assume, just take the time to see how it all pans out.” 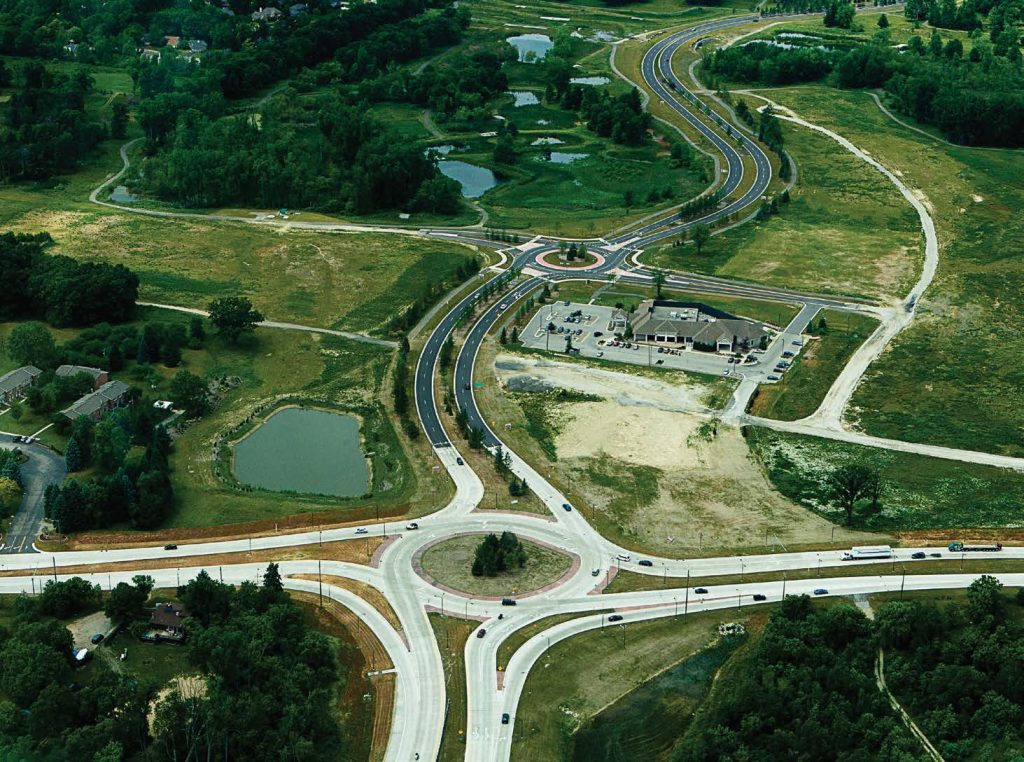 Pictured is the M-5 and Martin Parkway roundabout in Oakland County, Mich. (Photo provided by Road Commission for Oakland County)