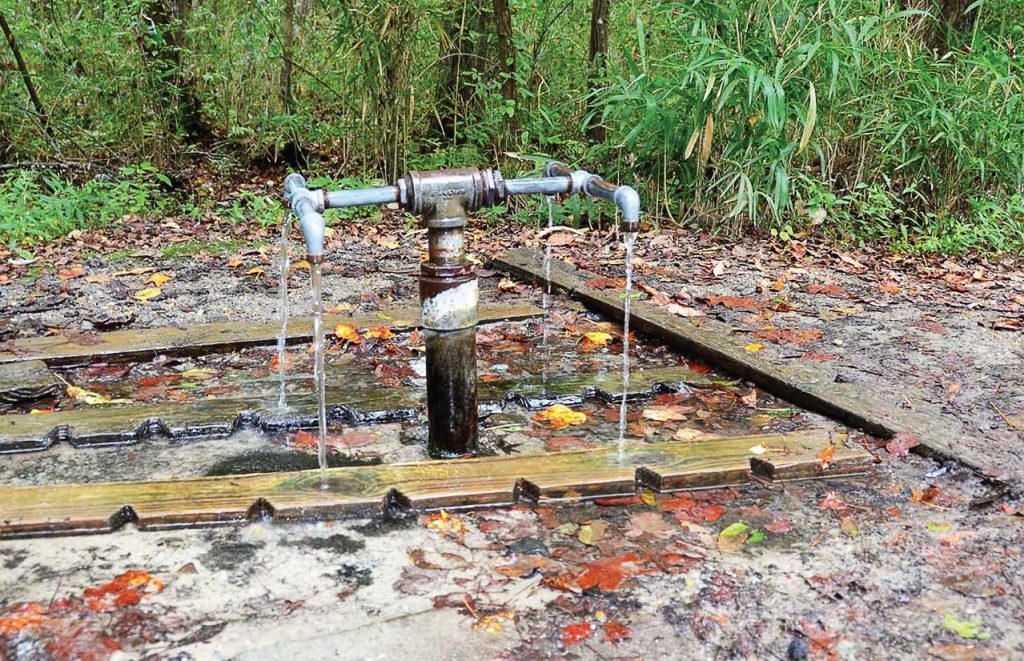 God’s Acre Healing Springs offers a continuous gush of pure mineral water for the taking. The site is not staffed and visitors are free to fill their containers with the water 24/7. (Photo provided)

Blackville, S.C., boasts perhaps the world’s only parcel of land owned by God.

God’s Acre Healing Springs is a small parcel of damp sod 3 1/2 miles north of downtown. The attraction sports about a dozen taps a couple feet off the ground that continuously gush natural spring water reputed to have healing powers, as allegedly evinced during the Revolutionary War.

Legend has it that on Dec. 22, 1781, a band of British Loyalists engaged local patriots on Windy Hill just east of the present-day Healing Springs Park and its associated church.

Sixteen patriots were killed in the gruesome battle, earning the location the moniker “Slaughter Hill.”

A quartet of severely wounded Tories were left to die under the watch of two of their comrades ordered to stay behind to bury the corpses.

Native Americans discovered the group in the woods and transported them to their sacred healing springs. Six months later all the soldiers returned to their garrison in Charleston 100 miles away, strong and in exemplary health.

Since then, the legend has accompanied the natural artesian springs, fed by an aquifer under the mountains hundreds of miles to the north.

The Rev. Nathaniel Walker (1724-1794), also a surveyor and trader, purchased the springs from the local Indian tribes for a supply of corn. Several owners intervened until L. P. Boyleston deeded the land in perpetuity to “God Almighty” on July 21, 1944.

Regular testings by the Barnwell County’s department of health and environmental control earn the mineral-laden water the agency’s highest rating. 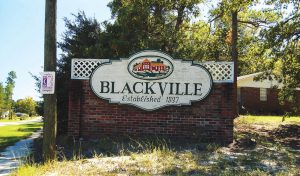 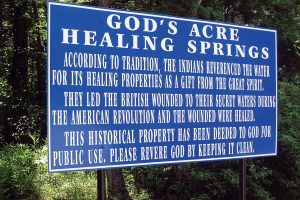 God’s Acre Healing Springs was deeded to “God Almighty” in 1944 and may constitute the only parcel of land on earth owned by the deity. (Photo provided) 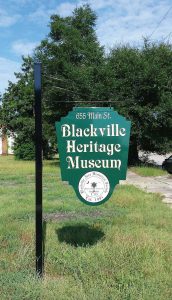 The unstaffed springs are available 24 hours a day and the water is always free for the taking. Some visitors drive more than 100 miles with truck beds full of barrels to frequently replenish their supply of the “clean tasting, delicious, absolutely refreshing” water.

Local residents can be seen on a daily basis refilling their jugs for home use. “It tastes better than the town water,” said Blackville resident Carolyn Hayes.

Some visitors take off their shoes to soak their feet in the water sopping the ground. Visits to the site invariably evoke rave reviews.

Of the 41 comments on www.tripadvisor.com, 29 ranked the attraction excellent, with the remaining feedback rating the site very good or good.

“You could feel the peace, smell the peace and taste the peace,” wrote one visitor who took her home-schooled children to the springs on a field trip. “We filled jugs with healing water, we drank from the fountain of life and we gave thanks to Jesus the Christ for the blessing of experiencing Healing Springs.”

“This is a tranquil spot,” wrote another reviewer. “Take in the foliage and soothing sounds of the running water.”

One visitor hailed the site as “beautiful, serene, inspirational” and noted, “It’s a nice spot to rest a bit and be grateful.”

After drinking the water, one visitor said, “I am telling you I could actually feel a difference in my overall physical countenance. I just felt good.”

“It worked for me as my sciatica improved after my first visit,” echoed another. “This is sacred ground,” another reviewer opined.

Annabelle Galik, a resident of Goose Creek 90 miles to the southeast east of God’s Acre Healing Springs, was given four months to live after a diagnosis of lung cancer.

Her husband, Steve, visits the site every two weeks with nine giant buckets to take home the ameliorative mineral water. He credits the spring water with prolonging Annabelle’s life.

“There’s just something about this place,” he said. “People for hundreds of years can’t be wrong. It’s about as close as I think you can get to the Garden of Eden.”

“I’d take a shower in it if I could,” said Annabelle, who has outlived her dire prognosis by several years.

“We have heard some people have been baptized in it,” said Harriett McKnight, Blackville’s town clerk for more than three decades.

For tourists venturing their first visit unprepared to stock up on water, the nearby Healing Springs Country Store sells sanitized gallon jugs for under $2 apiece.

Though Barnwell County maintains the parcel, complete with picnic tables, overhead lighting and paved parking slots, the town of Blackville does its share in promoting the site. “We get calls from all over,” said McKnight, citing California, New York, Mississippi and other states.

The attraction “pretty much promotes itself,” she said, but several town venues, including town hall and the chamber of commerce, distribute pamphlets and other literature touting the springs.

Town personnel constantly field questions about the springs, including whether the water is for sale and “if we can box it up and send it out,” said McKnight.

Blackville itself has experienced several miraculous rejuvenations. The municipality of 2,269 was dubbed “The Town of the Phoenix” in 1889 after rebuilding from the ashes of four major fires in 1865, 1876, 1887 and 1888, each of which nearly destroyed the town.