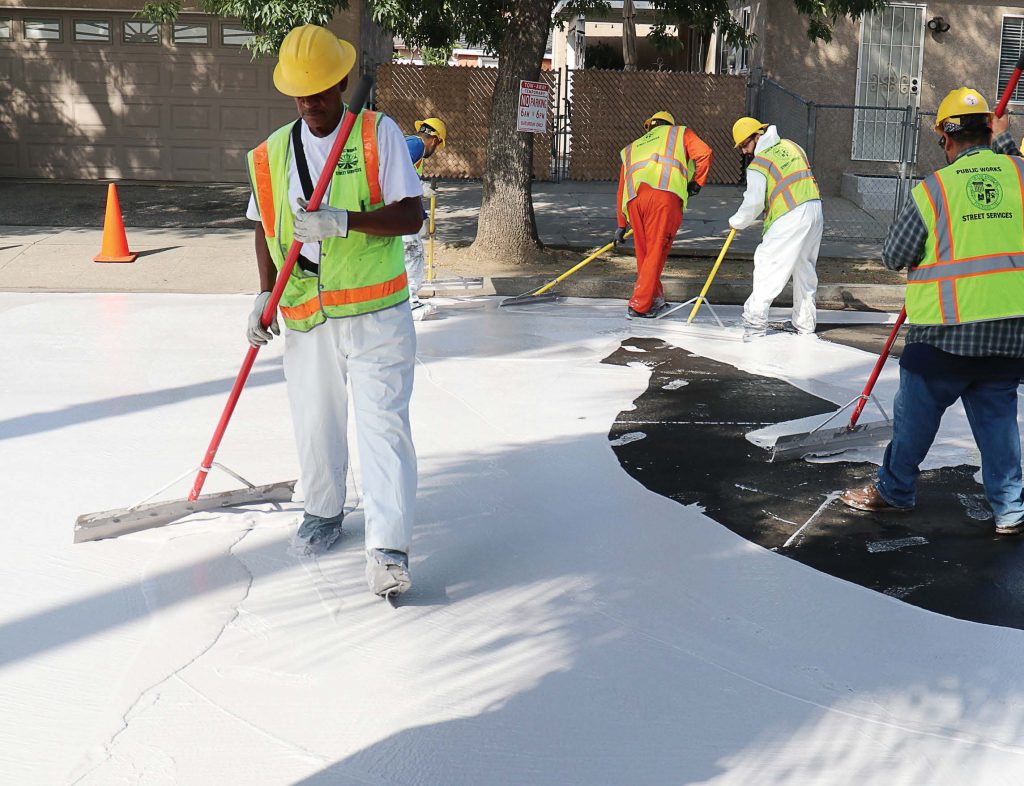 The cost of installing cool pavements is roughly 50 to 60 cents per square foot. Beyond their cooling effects, these gray-colored roads have shown savings in maintenance, too. (Photo provided)

The city of Los Angeles has a cool idea for a hot issue — both literally and figuratively.

Over the summer, the city completed applications of a light gray coating known as CoolSeal, which has shown a 10-degree reduction in heat gain, according to Greg Spotts, assistant director of LA Bureau of Street Services. During the dog days of southern California summers, dark asphalt soaks up the sun and raising surface temperatures. It is believed that even a small dip in temperature could curb energy use and mitigate the health risks associated with extreme heat.

In other words, it was both an infrastructure and public health issue. Some might even go as far to say that it’s an environmental issue. According to the Union of Concerned Scientists, “The latest research projects the Los Angeles region to be 3 degrees Fahrenheit to 4 degrees Fahrenheit warmer by mid-century.”

According to Spotts, the city had been kicking the idea around for a while. For about five years, the Los Angeles Department of Water and Power was studying the viability of cool roofing projects in the area, while also exploring cool pavement techniques. He said the city engaged a “working group” and soon found there was some ignorance when it came to cool pavement solutions.

“(The science community) believed there was a commercially available product ready to go,” he said, explaining that further research indicated otherwise. “So, we sought to bridge the gap around expectations and reality.”

Spotts said it took several years to find a commercially available product in the area. CoolSeal by GuardTop proved to be an effective solution. According to Spotts, by using a gray coat instead of black, the asphalt absorbs less heat.

According to its website, “CoolSeal by GuardTop is a high-performance, water-based, asphalt emulsion sealcoat designed to achieve lower surface temperatures through its lighter color and reflectivity.” It claims the product meets Environmental Protection Agency and LEED requirements of 33 percent reflectivity and can last longer than conventional sealcoats.

The proof was in a “test run” the city completed of a 7,500-square-inch area in the San Fernando Valley in July 2015, Spotts said. They found the material did in fact pass the test and was 10 degrees cooler on average than the black coating. In his words, “We thought that was substantial.”

The technique clearly had legs and the city responded by backing it with financial support. The department obtained a total of $150,000 in funding in 2016-17 to coat one city block each in 15 districts in the city. May 2017 was the first installation — and it was well received. He estimates the cost of installation to be about 50 to 60 cents per square foot. There are also benefits derived related to maintenance. Cool pavements are more durable than dark ones because they deteriorate less and last longer due to the decreased absorption of solar energy over time.

Los Angeles may be a leader when it comes to employing this technique, but the potential benefits aren’t unique to California or even the United States. He said the department has fielded inquiries from governments and media outlets around the world. Los Angeles is leading by example in other ways, too, and showing the world what’s possible. “We’re hoping to drive more innovation,” he said.

“It’s an exciting time to have a chance to innovate a bit,” he said.

This innovation has been well received so far. The public feedback has been positive, especially from people who walk their dogs on the streets. 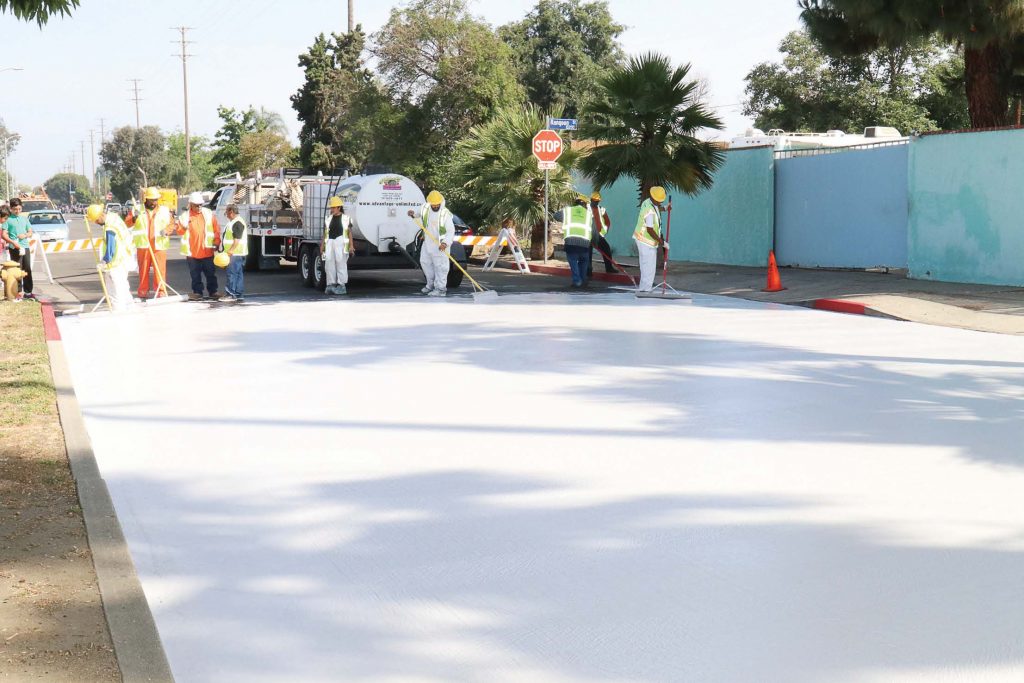 The LA Bureau of Street Services obtained a total of $150,000 in funding in 2016-17 to coat one city block each in 15 districts in the city. The first installation occurred in May 2017. (Photo provided)