↓
Home→Public Works→Sewage overflows after 2017 hurricanes: What happened and where to go moving forward 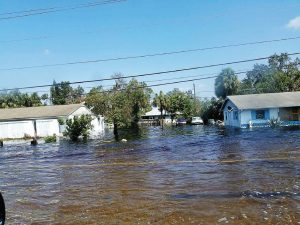 Due to Florida’s low-lying areas, the state is more prone to experience flooding, which in turn can cause sewage overflows when power is knocked out to lift stations. Pictured is damage caused by Hurricane Irma. (Photo provided) 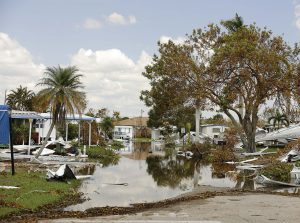 In the aftermath of Hurricane Irma, wastewater workers in Naples, Fla., retrieved as much of the sewage spills as they could with septic trucks and then disinfected affected areas with lime or bleach. (Shutterstock.com) 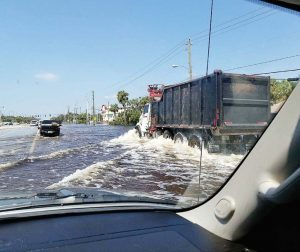 Drivers travel through water left by Hurricane Irma in the Bonita Springs, Fla., area. Floodwaters can contain sewage making them dangerous for people wading through them. (Photo provided)

In 2017, the United States experienced one of the worst hurricane seasons in its history. It will take years for Puerto Rico, the U.S. Virgin Islands, southeast Texas, southern Florida and other areas to recover from the damage and devastation caused by the catastrophic hurricanes that hit their shores and flooded their communities.

During the powerful storms, winds blew at over 100 mph, whipping debris everywhere. However, for as catastrophic as the eye of the hurricane was, many public health issues occurred thanks to the heavy rain that fell before, during and after the storm.

“Two weeks before Irma hit Florida, we experienced a significant amount of rainfall from a tropical depression that sat over us and dropped an average of 14 (inches) of rain,” Jeremy Fisher said in an email. He is a project manager for Florida Utility Solutions, which serves the Naples, Fla., area. He has been with the organization for two months and has been in the utility operation and maintenance field for almost 14 years.

“Since (southwest) Florida has a lot of low-lying areas, we experienced a lot of issues with flooding. We were already trying to dry out from that event when Irma hit us. We had a storm that covered the entire state from one end to the other. We had thousands of people without power for weeks after the storm hit.”

A particularly troubling issue was the overflowing sewage, which people had to wade waist deep through. This resulted in serious infections and even death.

As reported by the Naples Daily News and USA Today on Sept. 23, one woman watched her husband die as the result of an infection while another man’s leg was amputated because of a small cut that became severely infected. Both of these men were infected from wading through contaminated floodwater that carried toxic sewage and bacteria.

There was so much sewage in the floodwaters because of overflowing sewers throughout much of southwest Florida. Since much of the state’s landscape is flat, its sewer system is reliant on pumps to keep its waste moving.

“In my city of 67,000 people, we have nine pump stations,” said Nancy Gallinero, who is currently the manager of Portland, Maine’s, Water Resources Division and has spent over 12 years working in Florida. “In Florida, a community of 67,000 people is likely to have about 200 pump stations because it’s flat, so they can’t take advantage of gravity.”

Thus, when the area lost power, the majority of the home pumps were unable able to move the sewage so instead it overflowed into many homes and floodwaters.

“Along with the power issue, we had another (big) issue (that) we had to overcome,” Fisher said. “That issue was the shortage of fuel in our area. Since some of our areas were so badly hit, we were not able to get fuel locally. We were driving up to 100 miles each way to get fuel for generators and pumps.”

That’s not to say that wastewater workers and organizations didn’t respond quickly.

“The response was swift and tireless,” said Fischer. “We worked along with other utilities non-stop using diesel bypass pumps, septic trucks, generators and any other means possible to keep our systems going.”

“The cleanup process is pretty standard,” Fisher said. “Retrieve as much of the spill with septic trucks and then disinfect the area with lime or bleach.”

It’s unfortunate that these efforts weren’t enough to keep everyone safe.

Going forward, water waste utility companies like Florida Utility Solutions will be doing what they think is best to prepare for future hurricanes. However, some of the significant changes may be difficult.

“(You could) raise the state of Florida about 10-15 feet,” Fisher said. “Since that won’t happen, the best thing we can do is prepare for anything that can happen. We are using this storm as a learning experience and taking into consideration everything we did and designing our response plans based on that. We have numerous generators on hand and are preparing to add more to our arsenal along with adding additional bypass pumps. Th is way we can better prepare for anything that can or will happen.”

There are other things that can be learned from the major storm events that took place in the United States this year. It’s imperative that anyone who is going to remain near the storm is made aware and is cautious of the dangers associated with flooding. Assume any flood water might lead to infection and avoid it as much as possible.

Obviously, when it comes to storms as deadly as hurricanes Harvey and Irma, there is only so much in a person’s control. Before, during and after major storm events, utility and maintenance workers need to do the best that they can to keep people safe and clean up any potential dangers. Hopefully, the next hurricane season isn’t as catastrophic as it was in 2017.