With the ability to grow clear through roadways, survive up to 20 years in total darkness and uproot the foundation of homes, Japanese knotweed sounds like something out of a movie. 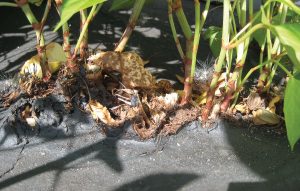 Naturally occurring in Japan’s volcanic regions, Japanese knotweed is a tough invasive plant to remove, and it is also costly, especially since it can grow through roads, buildings and vital infrastructure. (Photo provided) 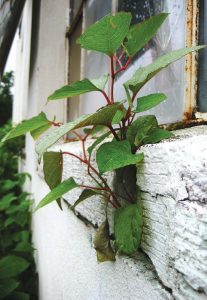 The U.S. is currently unprepared to handle Japanese knotweed, and spreading awareness is key to preventing its spread. Pictured is Japanese knotweed that has grown through a building’s wall. (Photo provided) 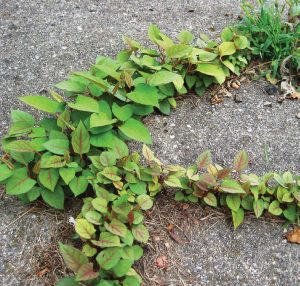 Japanese knotweed pokes through a sidewalk in Michigan. Knotweed can be found in almost every county in Michigan and in a wide swath of other U.S. states. (Photo provided) 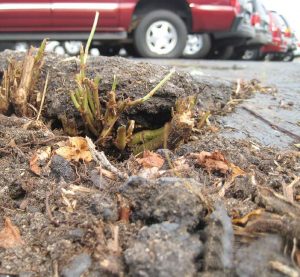 Knotweed roots can grow as far as 10 feet deep and 64 feet in diameter and requires care when removing. Treating it like another weed will only causes it to grow back more aggressively. (Photo provided)

The invasive species, which has already been wreaking havoc across the United Kingdom for decades and causing about $212 million worth of damage per year, has made its way to America — and researchers like Hannah Hudson are working tirelessly to find a way to slow the plant’s expansion.

“Knotweed grows through roads, housing foundations and causes legitimate structural damage to our infrastructure, which is expensive to repair and build,” said the Kalamazoo, Mich.-based knotwood researcher.

Hudson’s first encounter with the weed was in 2015 when she received a call from city hall that a woman had been complaining of a strange plant in her alleyway that was tearing through the concrete. Hudson went to investigate and came across a sight she’d never seen before.

“That was the first I’d ever heard of it,” Hudson said. “I saw how it broke through the asphalt, blocked the alley and started to grow up the house. After that, I started seeing it everywhere around the city and did some serious research.”

Since her initial encounter with the plant, Hudson has documented its presence in a variety of locations: stormwater drains, houses, parking lots and alleyways, just to name a few.

In her extensive research, Hudson discovered that the plant originally comes from volcanic regions of Japan, where it would frequently be covered by molten rock and has adapted to survive in pitch blackness and extreme temperatures. It is extremely resilient, and cutting it back or pulling it up only causes it to grow back more aggressively. It grows quickly and causes serious damage as it works its way through structures and pavement.

The species can be found in nearly every county in the state of Michigan as well as the Northeast and Northwest coasts and all but two provinces in Canada. It grows resiliently and spreads rapidly.

“Knotweed is routinely, unknowingly transported by municipalities,” Hudson said. “When soil is moved for construction projects and knotweed is present, that automatically starts another outbreak. In most of the places we’re being asked to treat, contaminated soil comes in from the outside. This comes back to haunt municipalities to the tune of billions of dollars, if we’re not careful.”

Rivers and other waterways are also a large transporter of knotweed since the branches can break off easily and a piece the size of a pea can start an entire colony of the plant.

With the species rapidly spreading and researchers scrambling to keep up, Hudson breaks some somber news:

“We’re not prepared for this — we’ve never seen anything like it,” she said. “There are millions of invasive species, but none of them break through roads and buildings and grow so quickly. We’re very unprepared as a nation for it, so it’s crucial to spread awareness so people start paying attention.”

Cities can spread information about knotweed, including what residents can do to help prevent its spread. Hudson said there are a few options, including an app for the more technologically savvy users.

“The Midwest Invasive Plant Network has an app where you can drop pins to map where knotweed is found,” she said. “That way, we can track where it travels and how the species progresses.” 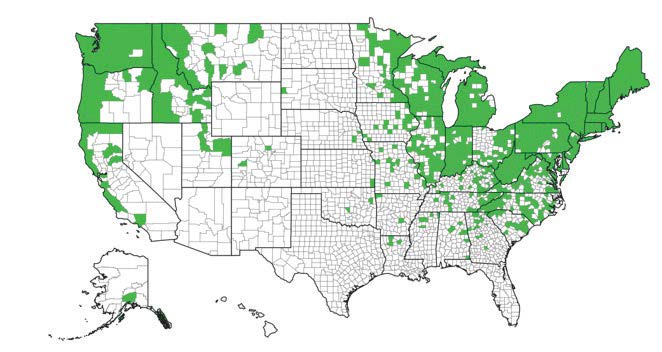 This map shows the areas of the U.S. that are being invaded by Japanese knotweed. In addition to being hard to remove, knotweed also spreads easily. (Map provided)

The real solution, however, comes down to prevention.

“The number one thing we can do as municipalities is prevent the spread of knotweed,” Hudson said. “If you treat it like you would any other weed, it just grows back faster and stronger. Doing things like cleaning our equipment before moving to a new construction site will stop not only knotweed but other invasive species.”

Hudson advises that when knotweed is identified, residents or city workers should cordon it off and immediately call a professional to discuss a prevention plan, then follow up with regular monitoring of the plant.

“Touching knotweed won’t hurt a person, but it spreads so easily that it really shouldn’t be disturbed,” she said. “Especially if you’re digging, know if knotweed is within 35 feet of where you’re at, you need to make special arrangements for the handling of the soil.”

Since knotweed roots can grow as far as 10 feet deep and 64 feet in diameter, the soil must be taken to a Type II landfill, where it is buried 15 feet deep so as to avoid further growth.

In addition to encouraging citizen action, Hudson said the job of researchers is to stay on top of the latest knotweed news.

“Treatment with this invasive species is so variable,” she said. “There are a lot of factors that go into deciding how to handle knotweed in any given area, so it’s important that we dedicate time and resources to understanding exactly what we’re dealing with.”

For more information on Japanese knotweed or to file a sighting with the MIPN, visit www.mipn.org/plantlist.