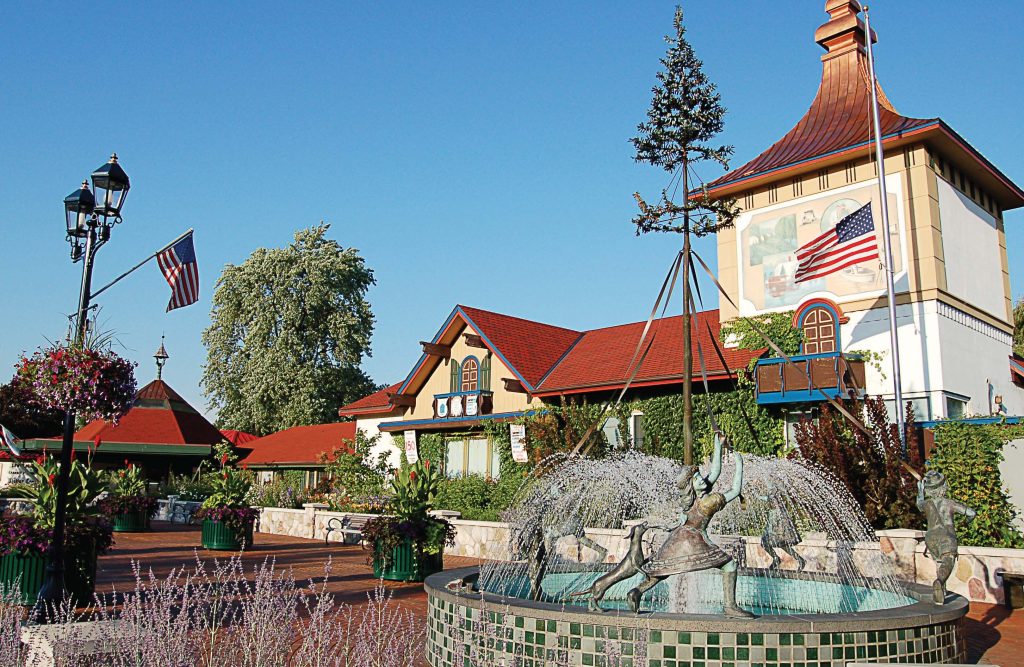 The Frankenmuth Visitor Center features a fountain with a maypole sculpture and a platz for convivial social congregation.

His nickname was Tıny. Hıs influence was gigantic. William “Tiny” Zehnder (1919-2006) grew up in the restaurant business. When he was 8 years old, his parents traded in their family farm to purchase a hotel in nearby Frankenmuth, Mich.

They renamed the establishment Zehnders Hotel in 1928. Tiny’s mother did the cooking and the hotel quickly acquired a favorable reputation.

In 1941, at the age of 22, Tiny became general manager of the hotel while continuing to farm. Two years later he married Dorothy Hecht, a waitress at Fischer’s, the hotel across the street, which the Zehnders purchased in 1950, taking over that restaurant as well.

A national recession severely pummeled the profitability of the Zehnders’ businesses. Both restaurants lost money for several years in the mid-1950s and bankers advised the family to sell one of the hotels to avoid bankruptcy.

That plan was not on the radar of Tiny’s dogged vision for success. At his insistence, the family actually borrowed money to construct an addition in Bavarian style onto the Fischer’s Hotel. They renamed it Frankenmuth Bavarian Inn.

The town celebrated the restaurant’s opening in 1959 with a weeklong festival featuring German entertainment, food, dancing and music. The Zehnders served up bratwurst, beer and pretzels. The Frankenmuth Bavarian Festival, as the annual event is now known, will celebrate its 60th occurrence June 7-10, 2018.

The Zehnders did not stop with the initial renovation of their hotels and restaurants. For the next decade they ventured continual remodeling and expansion, and in 1967, they added a 60-foot glockenspiel with a 35-bell carillon, which serves as a centerpiece of nostalgic entertainment.

Several times a day mechanically revolving figures depict the legend of the Pied Piper of Hamelin, accompanied by recorded narration and carillon music.

Tiny’s vision carried him far beyond his businesses. He wanted to transform the small agricultural community into “Michigan’s Little Bavaria,” which he hoped would be a notable tourist destination.

For the next half century, he devoted his life to encouraging and assisting other Frankenmuth businesses to build or remodel their enterprises into a Bavarian theme with its distinctive use of timbers in square and X patterns. 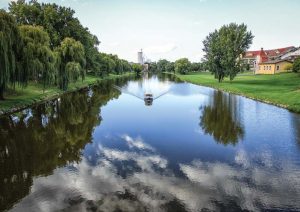 Visitors can enjoy avrelaxing and scenic ride down the tranquil Cass River. On the right is the stately Bavarian Inn Lodge. 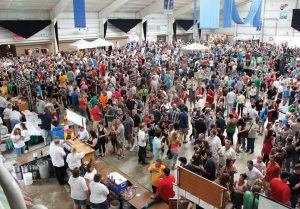 The World Expo of Beer, a two-day annual celebration, features a worldwide brewery competition and more than 300 flavors to sample. The 2017 winner was Bonfire Brown, concocted by a brewery in Douglas, Mich. 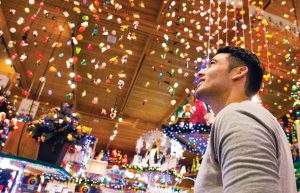 Bronner’s Christmas Wonderland, appropriately located at 25 Christmas Lane about two miles south of downtown Frankenmuth, hails itself as “The World’s Largest Christmas Store.” At the southern tip of the 27-acre campus sits a replica of the St. Nicholas Church in Oberndorf, Austria, were “Silent Night” was first sung in 1818. 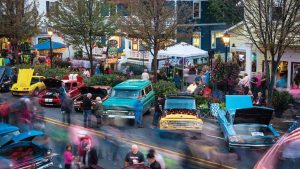 “We have about 5,000 residents, but on any given day, we get on the low end 50,000 visitors,” said Bridget Smith, Frankenmuth’s city manager.

For his leadership and influence, Tiny earned the moniker, “Mr. Frankenmuth.” Poor health compelled him to retire in 2004. Surrounded by his family, he peacefully passed away on May 23, 2006.

The town has carried on Tiny’s fervent legacy, with the historic downtown approximating a village in the kingdom of Bavaria.

“We have had a successful sister city relationship with Gunzenhausen, Germany, for 55 years,” said Smith. Every five years a contingent of Frankenmuth dignitaries visits their German counterpart, and “we just hosted a group of 30 visitors from Gunzenhausen in September,” she said. Every year the high school participates in a student exchange program.

Architectural regulations for the downtown have not been very stringent. The building codes merely contain guidelines, but the citizens of Frankenmuth have captured the spirit of the town’s heritage.

“Other businesses, such as McDonald’s and Kroger, which are outside the historic district, volunteer” to blend their establishments into the overarching Bavarian theme, according to Smith.

“Our population is diverse and it is getting harder and harder with out-of-town ownership to have that same commitment on a volunteer basis,” she said, “and we are just now beginning to revamp our zoning ordinance to include some guidelines.”

Nevertheless, the German heritage is still strong. “The German class at our high school, parochial school and public middle school are full every year,” said Smith.

“We are fortunate to have 26 dedicated full-time employees, including those in the police departments,” Smith said. “We have a very active police reserve, with 10 recruits in this year’s class. They take a year of training, and when they are finished, they help supplement our police department with crowd and traffic control.”

Michigan’s Little Bavaria is not all restaurants, shops and festivals, though.

“Our community is dynamic and friendly, and the whole city is very walkable,” said Smith. “We encourage people to see Frankenmuth as a local does. Visit our historical museum. There are stories all through town.”