↓
Home→Holidays→Yes, Virginia is for lovers of Christmas

The executive mansion closes for a few days so the staff can decorate the trees and the rest of the rooms. (Photo courtesy of Michaele White, office of the governor)

Many localities pull the community together during the holiday season to create a unique atmosphere and celebrate what makes each specific area different. Throughout Virginia, over 200 localities participate in an ornament event. The top ornament from each locality is then sent to the executive mansion where various trees are decorated for everyone to appreciate and admire.

A year after Gov. Terry McAuliffe took over the office, he decided to involve all the localities in the statewide event, which has now been celebrated for three years. That propelled the Virginia Municipal League and Virginia Association of Counties to reach out to constituents for the ornament extravaganza.

Several holiday parties and events are held at the mansion, giving ample opportunity for visitors, military families and the general public to view the unique ornaments. While not every locality participates, the mansion receives a good submission turn out. People can visit the mansion during tours or the public open house to wander around on a scavenger hunt, searching for their locality’s ornament or another place that has held fond memories for them. The open house also hosts a school choir and musicians to add more local spice to the party and incorporate Virginia communities even more.

“This ties every locality, no matter how far away, into the capital and the mansion,” said Stacy Ellis, deputy director of the Executive Mansion. “The mansion is the people’s home. People don’t always get to travel here so for them to know that a piece of their hometown is represented by an ornament is great for them. It makes them excited for the holiday season and gives them a reason to travel to Richmond. They haven’t gotten tired of it. They love that they’re involved.

“Gov. McAuliffe is a very festive man. He loves Christmas and getting the house decorated. We try to take any opportunity to decorate because he and the people love it. It makes it really fun for us who work here. The McAuliffes are a social family so they try to get as many people as they can in for different holiday parties. I think they’ve done an amazing job in keeping the holidays as inclusive for everyone as possible, greeting them with cheer and joy in the season.”

This event is a way the mansion reminds everyone that they are the ones who make Virginia special. Every ornament displays something special to a community; whether it be historical buildings, professions the area is known for or large events that happened, no ornament is the same. While the executive mansion has a steady stream visitors throughout the year, the amount quadruples during Christmas season as tourists flood from in and out of state.

“It’s a nice way to highlight the local flavor and the difference among us that makes us unique,” commented VML Communications Specialist Kelley Hope. “We’ve encouraged them to be locally made. Some communities have used locally sourced materials like a piece of wood specific to that area. It’s a nice way to feature something special about the community while also showcasing a local artist.” 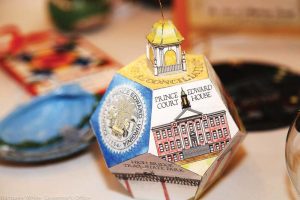 The official ornament for Prince Edward County. (Photo provided by Michaele White, office of the governor) 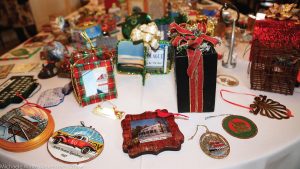 There are ornament guidelines for artists to follow, such as size, but everything else is left open allowing for creativity. (Photo provided by Michaele White, office of the governor) 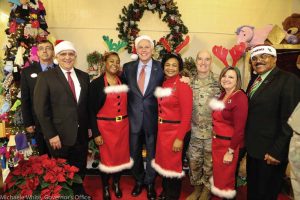 During the holiday season, Gov. Terry McAuliffe participates in many events, including ones that benefit military families. (Photo provided by Michaele White, office of the governor) 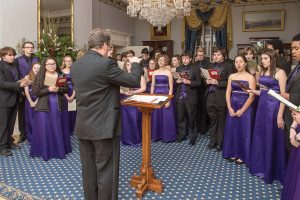 A choir from a local school is selected to perform at the Executive Mansion. (Photo provided by Pierre Courtois, Library of Virginia) 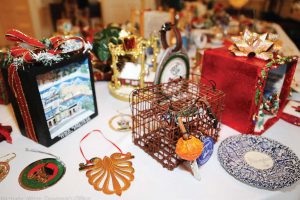 As there aren’t many design limitations, a wide variety of unique ornaments are submitted for people to admire. From 3D to traditional, each ornament has a piece of its home embellished in it. (Photo provided by Michaele White, office of the governor)

Each locality decides how it wants an ornament chosen, whether it be creating it as a locality or hosting a competition in which local artists create one that will be judged by other artists. Harrisonburg and Prince Edward County chose the competition route. Harrisonburg partners with the city’s Arts Council of the Valley to encourage local artists to submit their work. Unlike Harrisonburg, Prince Edward County only participated for one year in the ornament event.

“We invited the citizens to submit their ornaments and then had a panel of judges choose which one would go to the mansion,” commented Prince Edward County Administrator Wade Bartlett. “We had several from the community to pick from. When they picked the winner, we decided that we are pretty happy with that ornament. We don’t feel like there’s going to be another ornament that would be any better that could represent us.

“We’ve actually decided to make it our official ornament, which we sell in our visitor center where the artist keeps reproducing it. The event received some buzz in the community and was seen as a worthwhile event. It was well received. I think it gave the community pride.”

Next year will be the 2018 election year, and McAuliffe will be stepping down for the next official, making the security of the ornament event uncertain. For the executive mansion staff, this year’s ornament event will be bittersweet but is also predicted to be the busiest year yet. If the event does not to continue, some localities have considered resuming the event within their own communities by decorating city trees and uplifting spirits.

“Whichever ornaments aren’t selected, decorate our city hall tree,” explained Mary-Hope Vass, public information officer of Harrisonburg. “It’s up to each locality on how they submit their ornament, but this was an idea we had to involve the community (with and) also use the local art to decorate our tree. I think it’s really important to involve the community as much as possible. This is fun around the holidays, and we can feature people’s creativity. We can recognize residents while showcasing their art. That has been a very positive impact on Harrisonburg. I think it’s definitely something we’ll continue in the years to come.”