City fleet management crews across snow-prone states have been preparing their equipment, double and triple-checking their routes while getting ready for the long and cold days that have now arrived. But even with all of that hard labor, Murphy’s Law can strike, and if does, are you covered?

In Minneapolis, Minn., the crew has a detailed plan in place and the system runs like clockwork:

“If we just get a trace storm or nuisance flurries, the day and afternoon shift handle that with routine operations and the third shift crew operates as normal,” Minneapolis Director of Public Works Fleet Services John Scharffbillig said. “When we get measurable snow of 4 inches or less, we might start splitting the crew, bringing them in early, and folks would expect to start working 12-hour days. Now, when we get a snow emergency that automatically puts us on 12-hour shifts for three days, and we’re working around the clock and alerting residents of the plan.”

But what happens when Plan A doesn’t play out the way it’s supposed to?

That’s the situation the city of East Cleveland, Ohio, found itself in last winter. According to a news brief from cleveland.com, the city was expecting more than 6 inches of lake-effect snow over a 72-hour window in December 2016, and both of the salt trucks were out of commission due to electrical issues.

While this is a nightmarish scenario, Scharffbillig said it’s something fleet managers think about and, more importantly, prepare for.

First, he said, his emergency techs would be alerted of the problem and brought in immediately. They would try to repair the equipment on site, but if that was a no-go, they would do one of four things: look for a spare part, recruit the use of another piece of equipment, rent the equipment needed or call on neighbors for help.

“The key to dealing with catastrophic failure is having a relationship with your neighboring communities,” Scharff billig said.

If Minneapolis found itself in a situation where equipment was malfunctioning or out of commission, Scharffbillig said he has contingency plans in place, including mutual aid agreements with neighboring communities and rental contracts already signed with local dealers. 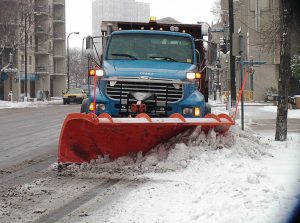 In a worst-case scenario having a contingency plan at the ready can reduce stress for fleet professionals. Minneapolis, Minn., has worked mutual aid agreements and rental contracts into its contingency plan. (Photo provided) 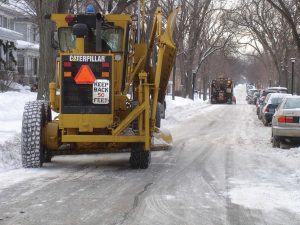 An important part of Minneapolis’ winter snow removal plan is preventative maintenance for which it uses an online fleet management system. (Photo provided) 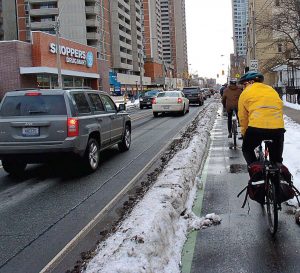 While Minneapolis has yet to use its mutual aid agreement, it would likely use it to request help with clearing secondary walkways or remove already plowed snow. (Photo provided)

“Mutual aid agreements are typical with fire and police departments, but we tap into those resources, too. It’s basically surrounding communities agreeing to help one another out in the instance of a disaster,” he said.

Scharffbillig has been with the city of Minneapolis for a decade and has never had to utilize the mutual aid agreement, but said if he needed to, he would likely request help with clearing secondary walkways or removing already plowed snow.

The second half of the contingency plan is actually completed long before an issue arises: preventative maintenance.

“The key to making sure you have working equipment when you need it is a preventative maintenance program,” Scharffbillig said. “Each of our vehicles is tracked in our fleet management system and comes in twice a year — once for a safety check up and once for the annual preventative management program.”

Using the online fleet management system to track trends in repairs has been invaluable, Scharffbillig said. For example, crews now are aware of failure trends after a certain amount of miles or typical usage. This way, he said, they’re able to repair or replace parts before problems even arise to begin with.

However, sometimes things happen that are out of the control of humans, and that’s when camaraderie with neighboring communities is paramount to keeping residents safe during snow emergencies.

“Around here, we visit with one another one or two times a year,” Scharffbillig said. “We know each other as people. We’re not afraid to pick up the phone and make that call for help when we need to. It’s more than just talking shop. It’s the operation and the shop working together. The name of the game here is communication.”