Closed for over 10 years, Pleasant Hill, Iowa’s, White Water University is an anomaly. The water park’s colorful, vacant slides and empty cement swimming pools should be a symbol of local urban decay.

Yet, the small town is thriving. And its citizens have a lot to be optimistic about — most notably, their mayor.

Sara Kurovski, 33, is, as of press time, running unopposed to be re-elected for a second term. In her first four years, she accomplished a lot. She became the youngest and first female mayor of Pleasant Hill.

Even though she has broken ground as a politician, she does not consider herself to be one.

“It is absolutely public service,” Kurovski said. “Anyone who works at the local level and deals with sewers, and street construction, and pot holes, and economic development and dogs barking knows very quickly that it’s service and not politics.”

Kurovski spends her time on the betterment of her community. She doesn’t think about the political party affiliations of herself or the other elected officials she works with. Instead, she’s focused on moving her community forward the best way that they can. 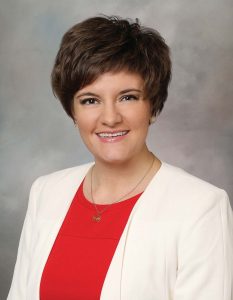 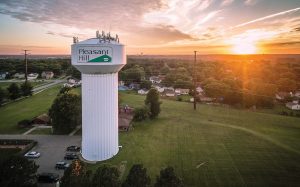 Mayor Sara Kurovski plans to focus on quality life, public safety and further economic development in Pleasant Hill during her second term as mayor. As of press time, she is running unopposed. (Photo provided) 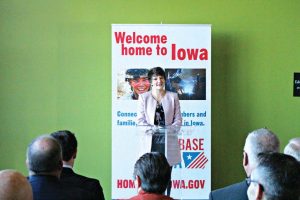 Kurovski gives a speech after the city of Pleasant Hill was named a Home Base Iowa Community. HBI Cities provide incentives for veterans who relocate within their city limits that stand alone or complement those offered by the county and state. (Photo provided) 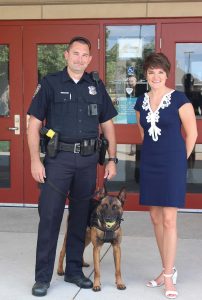 Kurovski hopes to help Pleasant Hill continue its high level of public safety services by building a new public safety facility. Here she stands with a local officer and his K-9. (Photo provided)

She does admit that she has contemplated pursuing higher-up government positions, but for now, she is happy where she is.

“What I love about local government is the ability to fundamentally transform your community,” she said. “Whereas, I don’t know how those transformations occur once you move higher up. Instead, can I be a voice and a strong voice going to those individuals (in more prominent government positions)? Or at some point do I make that leap? I don’t know, but right now, I just really love serving at the local level and being the mayor of Pleasant Hill.”

In addition to serving as mayor, Kurovski is the director of the Tocqueville Society at United Way of Central Iowa. Or, as she puts it, “I’m in charge of relationships with our large donors.”

Her other significant roles are being a wife and the mother of her two young children.

“I am very lucky to have an equal partner,” Kurovski said. “I highly encourage young women — that I get the opportunity to speak with — to find an equal partner and have those hard conversations early on about what it would look like in the future if someone’s career becomes more dominant than the others. I’m lucky.”

Although she is breaking down stereotypes about working mothers now, she almost let them prevent her from running for mayor in 2013. When the previous mayor of Pleasant Hill, Mike Richardson, decided he was not going to run for re-election, he encouraged Kurovski to run. She responded “no” and said that she wasn’t qualified.

Luckily, at the time she was reading “Lean In: Women, Work, and the Will to Lead” by Facebook COO Sheryl Sandberg. The chapter she was reading at the time was “Don’t Leave Before You Leave,” which is about women who make decisions for their families and then say no to opportunities.

“It was exactly what I had done that same day,” said Kurovski. “I was qualified and I am qualified. I have a supportive family and I thought ‘Wow, I can’t believe I did that to myself.’”

She decided to enter the campaign and found herself up against a man who had previously served as mayor of Pleasant Hill for 20 years. Not only did she win with 78 percent of the vote, she also ended up being mentioned in Sandberg’s next book, “Lean In For Graduates.” People who have read the book reach out to her to this day.

“I am so excited when I will randomly get a Facebook message or an email from another woman in the state of Iowa who says, ‘I just read “Lean In for Graduates” and was so excited to see a woman from Iowa in here and can we be connected?’ It’s just a humbling experience to respond to these women and support them in their endeavors.”

Another major connection she has made is with the American Council of Young Political Leaders. Recently, she was selected as one of their delegates and sent to Israel.

The purpose of the program is to strengthen international knowledge and international relationships between the U.S. and other nations throughout the world. Kurovski said the opportunity was “life changing.”

Her frustration stemmed from inefficiencies in government and in its inability to consistently make necessary positive changes — something she did not see in Israel, even though the country has been in a war-torn environment for decades.

However, she has also been inspired and has a lot more she hopes to accomplish in Pleasant Hill.

There are three essential components that she is focused on, and they all deal with the quality of life in her community. First, she plans to develop a 77-acre park on land the city purchased during her first term. Second, she hopes to help the city continue its high level of public safety services by building a new public safety facility.

“Our officers are currently put into difficult situations with the facility that we have,” Kurovski said, “so we have to prepare and plan and build, or we cannot continue to provide the high quality of service that residents expect in Pleasant Hill.”

Third, she plans to continue to develop the city economically. This includes building a city center, cultivating the necessary relationships and redeveloping certain areas.

Given all Kurovski has already accomplished as mayor of Pleasant Hill — as well as what she will continue to do — it’s no wonder her city doesn’t need a water park for it to be a place people want to see.