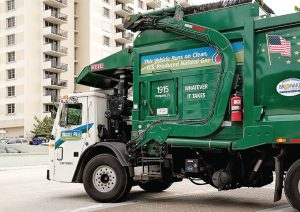 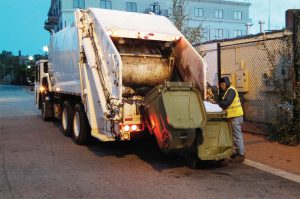 Clemson, S.C., public works employees who spot issues on their regular trash pickup routes — such as brush piles or oddly shaped trash items — can log them into the city’s PinPoint system, alerting their supervisor. (Photo provided)

A Clemson, S.C., leaf vacuum truck picks up leaves. While out on their routes, public works employees can note brush piles, hanging limbs or other issues that need attention using the city’s PinPoint system to notify their supervisor. (Photo provided)

We know that technology and social media allow for better and more frequent communication with our loved ones, but how is that transferring to municipal jobs? The answer is in a variety of ways.

According to a Florida International University study by Sukumara Ganapati, titled “Using Mobile Apps in Government,” there are two types of municipal apps: enterprise-focused and citizen-oriented apps. On the local government level citizen-oriented apps are the type of technology that is getting priority. Enabling citizens to be better informed about city happenings and streamlining bill payments and report filings are where most municipalities spend their technology dollars.

Scott Slatton, legislative and public policy advocate for the Municipal Association of South Carolina, affirmed that is what’s happening in his state. Slatton said there are numerous examples of using technology to reach residents, but he couldn’t think of any specific examples of municipal managers using social media tools to communicate with employees.

“These same tools that are being used to reach the public could be used to reach employees as well, but most of our cities are on the smaller side where one-on-one personal communication is still the most used,” he said.

Texting is widely used to communicate with employees, including group messaging, and obviously, email is still heavily used within departments. Slatton said the widespread use of iPads in different municipal departments is also a means of communication for departmental purposes.

Building offices across the state of South Carolina are using iPads to issue work orders and permit requests, he said. Mobile data centers are also being extensively used by police departments, allowing officers to stay out on the road longer. Slatton, who was once a city manager, said he knew from his own experience as a firefighter that “depending on where you are in the state, you could be getting 911 dispatches on text.”

According to a March 2015 blog post by Ashish Kaushal in NewGen, “Role of Information & Communication Technology (ICT) in Smart City,” the pairing of technology and communications is growing in cities.

“A deeper reliance on ICT is becoming inevitable. Social media, mobility, machine to machine (M2M), Internet of Things (IoT), data, cloud computing, etc. will become the backbone of the next generation of Smart Cities,” the blog reads.

Slatton said the Municipal Association of South Carolina has a technology partner, VC3, that offers cloud computing accounting systems. “They do the accounting for us using cloud-based platforms so the city doesn’t have to develop its own.”

Internet of Things is a concept where objects communicate and exchange information with each other through wired or wireless networks without any user intervention. One example used in the blog cited intelligent waste containers that can detect load level, which can help optimize the collection routes. The way this works is the IoT connects the end device, in this case waste containers, to a control center where optimization software processes the data and determines the optimal management.

The city of Clemson, S.C., received a Municipal Association of South Carolina Achievement Award because of its development of PinPoint, a technology geared toward public works but with applications for other city departments. According to Slatton and the citation on the achievement award, Clemson officials met with two local businessmen to discuss a way to simplify departments, particularly public works departments.

The city officials and businessmen worked together to develop technology that would decrease miles driven by collection crews. The primary goal was to make curbside debris removal more efficient, but they also included applications for code enforcement, post-disaster information, collection, municipal risk assessment and other documentation as well as many other data collection scenarios.

The system has three main components: a GPS, Wi-Fi and a touch-screen-enabled PDA; a common Wi-Fi access point; and a desktop mapping and reporting application. The system was designed to be very user-friendly, regardless of prior computer experience.

For example, a sanitation truck driver on their daily route can also watch for piles of leaves, brush or appliances that are left curbside and simply push the touch-screen button corresponding to that situation. The computer records the GPS position, date, time and category selected, and at the end of the day, the driver wirelessly uploads the data to the public works administrator’s computer. The administrator uses the information to plan the next day’s debris removal.

The application can be used by other departments, too. For example, the police department could use it to report potholes, streetlights out, etc.

The MASC felt that PinPoint is a win-win for taxpayers, city employees and administrators.

As far as other “enterprise-focused” technology, Ganapati said that human resources functions lend themselves well to mobile optimization. Employees can also access informational apps in real time. Those apps include directory searches, organizational and operational procedures and other content management systems that can be accessed spontaneously.

“There is a greater degree of integration between line workers in the field and back office workers. Field case management, road and rail management, inventory control and supply chain management are all areas that have potential efficiency gains with mobile use,” Ganapati said in his report.

The city of Hampton, Va., has a social media policy for employees but was unable to be reached before going to print. According to the policy online revised in July of 2014, “The city of Hampton understands that social networking and Internet services have become a common form of communication in the workplace and among shareholders and citizens. Employees who choose to participate in social networks as a city employee should adhere to the following guidelines.”

So while municipal departments are putting their citizens first when using technology for communication, technological innovations are bound to continually change the way city employees and managers communicate with each other as well.