Cities of 5,000 and smaller in Iowa have been given an unique opportunity to address abandoned commercial and public structures through the Iowa Department of Natural Resource’s Derelict Building Grant Program, which was established in 2011. This program offers the financial assistance communities might need to improve the appearance of their streets, revitalize local economies and alleviate the environmental concerns abandoned structures can pose — such as asbestos.

“We’ve had (the Derelict Building Grant Program) in place for six years now,” Scott Flagg, with the Iowa DNR, said. “We’ve had 199 applications and been able to fund 115 projects.”

Using funding from the DBGP, cities are first able to investigate the amount of asbestos present in a building; determine the physical characters and stabilities of their structures by completing structural engineering assessments; and abate identified asbestos. These projects can then reapply for more funding for the following year for additional program-related tasks like building removal or renovation.

Landfill diversion is a major goal of the program, and it is promoted by incentivizing cities and towns to recycle or reuse building materials. DBGP does this by reimbursing 50 percent of demolition and renovation costs based on the percentage cities reuse/recycle with a cap of $50,000.

“Once we can get the message out to folks, they embrace it and try to bring (similar efforts) into other areas of their cities,” Flagg said. “It’s been a huge success.”

For Flagg who is not from Iowa, the program has been a unique way to learn the state’s geography and its 99 counties, though he said so far the DNR has only had projects in 60 counties; however, it is a goal to expand to those remaining counties. Iowa DNR is also looking into additional programs to help communities, with Flagg commenting that a program to prevent buildings from becoming derelict in the first place is being considered.

“It’s been a lot of fun helping all of these communities,” Flagg said, commenting that they often have very passionate people who get the ball moving. “Each of these towns need a local champion.”

Once momentum is built, Flagg said many of the communities are addressing their derelict buildings and choosing to fulfill local needs, whether by renovating or tearing them down to make way for something else. For instance, this past August, 18 communities were awarded grants, totaling $350,000. Their projects included not only asbestos and structural assessments and asbestos abatement, but also major goals and improvements, from a multi-purpose theater to more senior housing and land for development.

For the cities of Preston, Tabor and Carlisle, Iowa, which were among those 18 communities, DBGP gave them the push to satisfy their own communities’ needs. 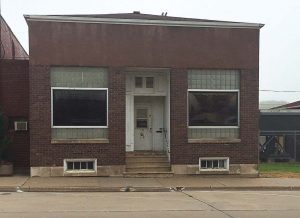 This city-owned building in Preston, Iowa, had been vacant for years and will be undergoing remodeling efforts throughout November to become a business incubator thanks to grant funding through the Iowa Department of Natural Resources. As the former clerk’s office, Preston was plotted around it, making it important to improve the building. (Photo provided) 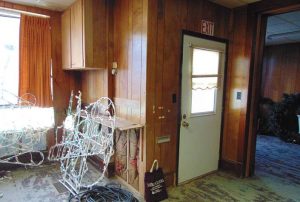 The interior of Preston’s future business incubator awaits remodeling. This will entail installing drywall and making it wheelchair accessible. The city tentatively hopes to have an open house for the finished project during the last weekend of November. (Photo provided)

Preston had an approximately 700-squarefoot brick building that had been vacant for years in its downtown. City owned and once serving as the former clerk’s office, something had to be done with it. Patti Hoffman, a Preston City Council member and a Preston Growth and Development team member, said both demolition and restoration were considered as options. She, however, completed the grant for restoration first, spurred by findings from an Iowa Economic Development Authority walkabout assessment of Preston’s downtown.

“Our Main Street has taken a couple hits,” she said, noting they now hope to get the right vendor in the building by turning it into a business incubator, an idea she learned about from another city. “I’m excited at the opportunity to welcome a new business. There are a lot of costs in that first year for new businesses — to have free rent that year is great.”

Prior to realizing this dream, however, Preston used the phase one grant to make sure the building was not full of asbestos and structurally sound before any money was put into it with a remodel. After it cleared, she pursued further grant funding through DBGP to develop the business incubator and was successful.

“Scott Flagg has been phenomenal. He is my hero,” Hoffman said, sharing how he helped her and Preston through the DBGP process and found resources for her small city. “We would not be where we are without his expertise and support.

“It’s so exciting,” she added, noting the city has embraced DBGP’s landfill diversion goal by finding items in nooks and crannies to recycle and reuse, including a furnace.

As part of the remodel, which kicked off in October, the city of Preston will be working with a lot of skilled volunteers to drywall the building and make it wheelchair accessible while keeping its old vault with its arched ceiling. The goal is to complete the remodel in November with an open house the first weekend before December.

“We have not had formal requests but have had several parties express interest,” Hoffman said of potential businesses. She hopes to have a business in sometime during December.

Hoffman highly recommended other cities get involved in organizations within their own states. She said, “Networking has helped our city realize grant awards like the (DBGP) and a KaBOOM! grant that sparked the idea for our new playground that opened in May 2017 and more.”

Tabor, Iowa, tore down a derelict brick building to create space for a new library, which has been in the planning stage.

The yellow house, visible in the after photo below, is currently where the library is housed; it will be taken down once the new library is built. 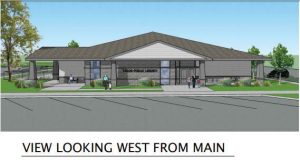 Tabor faced a similar situation to Preston: a dilapidated building right on Main Street. “It’d been vacant for probably 30 years or 25 years,” Jennifer Williams, a city council member who is also involved in Iowa’s Hometown Pride program. “I learned about (DBGP) through Hometown Pride, and once I learned about it, I brought it to the council’s attention and pushed to take advantage of it.”

Tabor, however, faced a challenge because it didn’t own the building that had once been a restaurant. “The owner wasn’t local and didn’t care how it looked, only putting in the bare minimal effort,” she said.

The city did receive permission to complete the phase one and two DBGP grant from the building’s owner, which included surveying the building’s structural integrity and testing for asbestos, which it didn’t have. “We looked at a remodel, but the cost was far more (than demolishing). Structurally it was just not sound.”

The city decided to purchase the building and demolish it to open the way for a new library, something it had been planning. Williams noted it was a long process, but once the purchase was complete, she applied for the additional funding to demo the building and was successful. The building was then demolished in September.

“It was the first building people saw coming through on Main Street,” Williams said, noting one business owner had decided not to buy a location in Tabor because of the dilapidated building across the street. Once this got back to the city council, she said they moved very quickly.

Tabor has also espoused DBGP’s landfill diversion goal by sending iron to a town with a scrapyard, salvaging old rafters to be repurposed and allowing bricks to be used as fill on properties. “We diverted a lot from landfills,” Williams said, though she added the city is still gathering data to determine how much was diverted. “We also used GovDeals.com. The building was full of a lot of junk. They sent out a representative who taped it off and assigned lots. It cleared out a lot of the building — all the tables, dishes. It worked out very well, too.”

As for DBGP, Williams said, “It gave us an incentive to push forward once we knew the grant opportunity was there. It helped that there were deadlines to push the council, push the community … For the most part, it was a positive experience. I would recommend it.”

Faced with limited downtown parking, Carlisle looked to DBGP to aid in funding its demolition of a derelict building in its downtown area. “It was a white cinder brick building next to a grassy area and building that used to be a gasoline station,” City Manager Andrew Lent said, noting the latter two properties had been donated to the local chamber of commerce for its use.

The city purchased the cinder block building in November 2016 and had it inspected for asbestos prior to the purchase. In December, the city contracted to have the small amount of asbestos present removed. Lent said after the city leaders became aware of DBGP and its landfill diversion reimbursement, they opted to apply for the grant for the building’s demolition.

“We took metal from the building to a local metal recycler,” Lent said. “Concrete was used to reline our sewer lagoons — to help prevent erosion.” He estimated that about 89 percent of materials were diverted from the landfill.

Demolition work was completed Aug. 28, and the city has kept the building’s concrete slab to be used as a parking lot area to support a park/greenspace/bike hub area. Carlisle Parks Department has planned several events in the area while chamber is launching a bicycle-friendly community marketing push to businesses, touting the city’s newly constructed 3.2-mile nature trail. By bringing parks and trails downtown, Carlisle hopes to spur economic development by increasing traffic to downtown businesses.

“Recently, we have had one restaurant open up and another expand,” Lent said, noting there is still one empty restaurant storefront in the downtown area. With the added parking and addition of a trailhead, it is hoped that opening will be filled quickly.

Of DBGP, he said, “It’s one of the easiest grant processes I’ve done. Our project was pretty basic and we only had to bid out demolition cost (since the city had already removed the asbestos). It’s great for smaller cities.”

Currently, DBGP still has $50,000 available for asbestos assessment, asbestos abatement and structural engineering assessments. Cities of 5,000 and smaller can also enter the next funding round by submitting their applications by April 4, 2018. For information, contact Scott Flagg at (515) 725-8318 or Scott.Flagg@dnr.iowa.gov.