When children in underprivileged neighborhoods missed out on the city’s summer programming due to lack of transportation, money and resources, Louisville, Ky., Metro Parks and Recreation organizers banded together to bring the summer programming to them.

This is done in the form of a fire-truck-turned- playground that travels to various neighborhoods and hosts afternoons of activities like arts and crafts, board games, athletics, demonstrations and educational games. The playground on wheels serves as an option for families with youth who, for whatever reason, may not be able to attend traditional summer camps and activities.

Louisville Parks and Recreation Director Seve Ghose is no stranger to mobile playgrounds as he started the same program in three other cities before landing in Louisville. The key, he said, is to give people something they have never seen before.

“We’re always trying to be creative in engaging youth during the summer with free and affordable programs,” he said. “A fire truck definitely raises interest. The lights, the sirens, it’s something people don’t see every day.”

Working in conjunction with a local fire department, Ghose requested to be alerted when the department was going to retire a truck. The chief, Ghose said, was surprised by the odd request but worked with him to make it happen. They converted the truck into a totally hands-on experience, and the station now handles yearly maintenance on the vehicle.

In another local collaboration, the truck is operated by school bus drivers. According to Ghose, the arrangement could not have been any better.

“We initially had a hard time finding a driver because we needed someone with a CDL,” Ghose said. “We overcame that challenge by seeing if any school bus drivers wanted the summer gig. We needed the right personality, too — they needed to be able to engage. They also know the city streets like the back of their hands and are used to working with children. It’s a win-win.”

The truck operates Monday through Friday and typically visits three sites per day, staying a few hours at each. On average, 200 children participate in activities at each site. While the mobile playground is innovative and fun, the impact it’s having on the community is unparalleled.

“The impact to the city has been enormous. We’re growing into a department of mobile recreation leisure activities, and we will probably end up with another mobile playground again soon,” Louisville Recreation Administrator Anthony Williams said.

“We go to places where kids either don’t have leadership or don’t have a physical space to go. You see kids grow from being on the cusp of making poor life choices to communicating with us and each other and engaging with our activities.”

Local entities have begun requesting the playground come to their events. Organizers of events everywhere from public schools to neighborhood block parties have reached out to see how the truck could be utilized.

“In the off-season, the plan is to offer up the truck for local events,” Ghose said. “It’s free to the community, and we hope it’s utilized to engage children year-round.”

On a municipal level, the operation and maintenance of the truck is fairly straightforward. Funding for activities comes from the city’s general summer operational budget, and summer camp staff run the truck on a daily basis. Th e tough part? All the advance planning an operation of this magnitude requires.

“It does take a lot of scheduling, programming, equipment, hiring and maintenance to run the mobile vehicle,” Williams said. “My advice to other cities would be to start small and grow bigger as you go. You’ve got to know your city first. Be able to say how you’d start and sustain this thing to make the process work. Remember that not having people come to you, but going to them, is key.”

Just as important as planning is the cross-city collaboration, Ghose said.

“Kids love it when the 30-foot red fi re truck pops up in their neighborhood, but it doesn’t happen overnight,” he said. “We’ve worked with a lot of departments to make this happen, and we want to keep growing. For example, next year we’re trying to work with the water department to be able to open up the fi re hydrants and create sprinklers for the kids.”

Despite the long hours and manpower that go into the mobile playground, Williams reiterates that it’s all worth it for the positive impact it has on children in Louisville neighborhoods.

“Some of our kids are in neighborhoods where people would be hesitant to walk around in — crime-ridden areas, low income, high drug areas. To go get kids out of those areas to participate in this program has been the biggest plus of any,” he said. “Seeing the kids grow from being part of this is a miracle moment for me.” 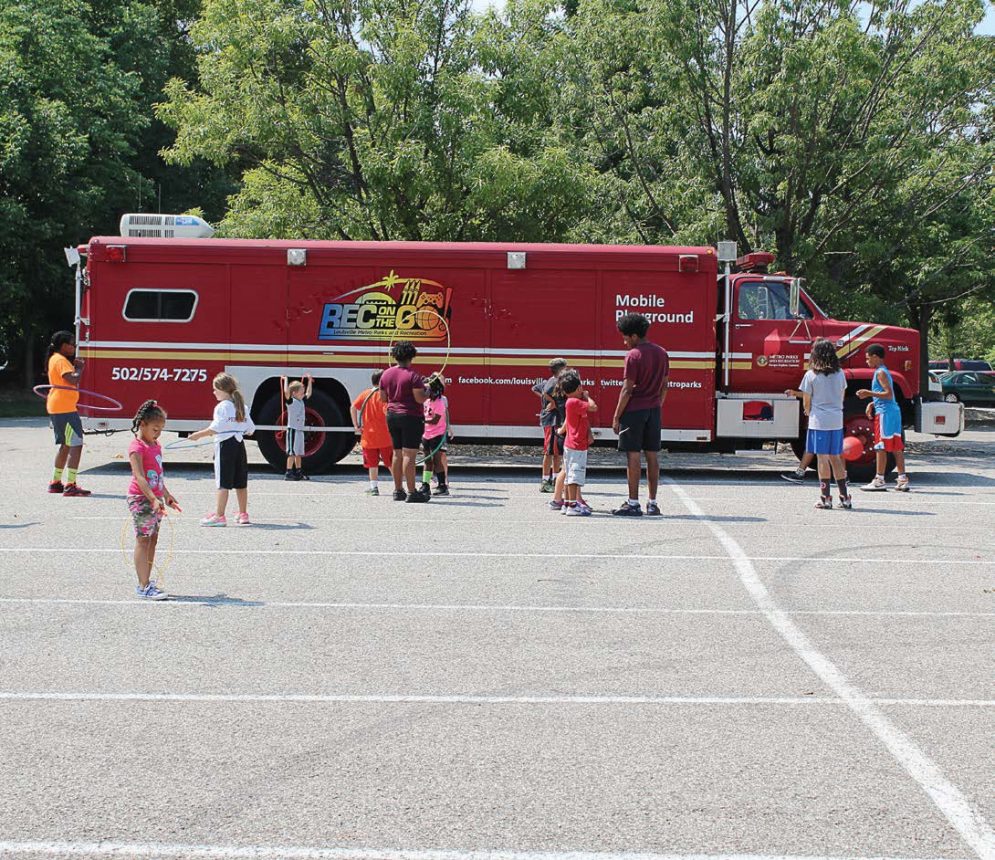 Louisville, Ky., Metro Parks and Recreation converted a 30-foot decommissioned fire truck into a mobile playground driven by school bus drivers in the summer months. It is used to reach kids who might not be able to participate in summer programming for various reasons. (Photo provided)

Rec on the Go has become so popular that local entities are requesting the playground come to their events — something the city is considering in the off-season. (Photo provided) 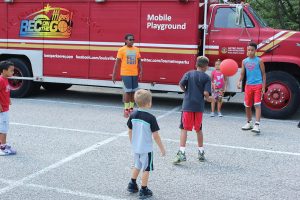 The repurposed fire truck, now Rec on the Go, has had an enormous impacted on Louisville, going to places where kids either don’t have leadership or don’t have a safe physical space to use. (Photo provided) 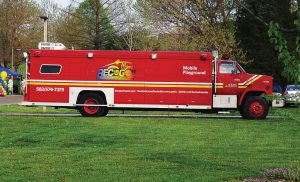 Louisville’s mobile playground brings with it a variety of activities, including arts and craft s, board games, athletics, demonstrations and educational games. (Photo provided)