Parks are an important center of the community. While they can add more value to surrounding properties, they also enrich neighborhoods and invest in communities, building bonds that make a town, a home. Parks bring tourism and impact an area’s economy by creating opportunities for business. Park revitalization can potentially create an economic revitalization, which is why municipalities are showing initiative by refreshing them into friendly areas for people of all ages and abilities. 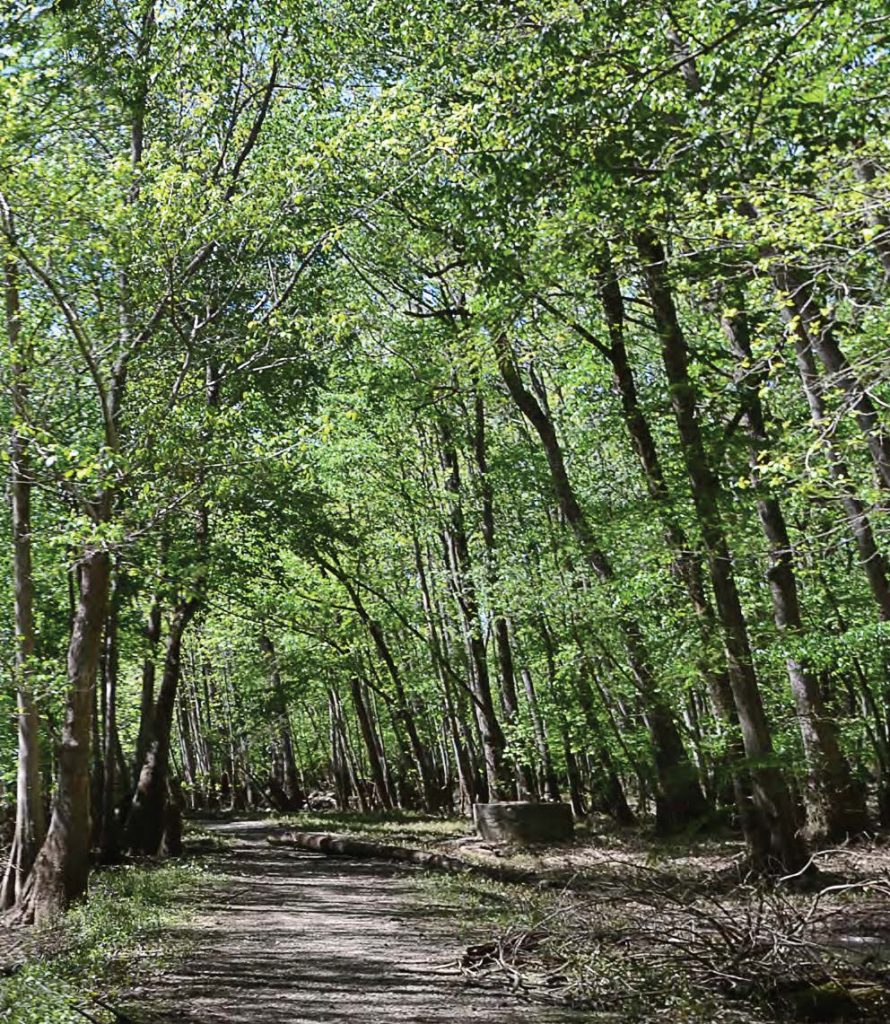 The benefits of having refreshing parks also extends to the environment, by helping protect animal habitats and reduce air pollution while giving people a safe means of interacting with nature. (Photo provided)

Pictured is an illustrative plan of the Town Common park along the Tar River in Greenville, N.C. (Photo provided) 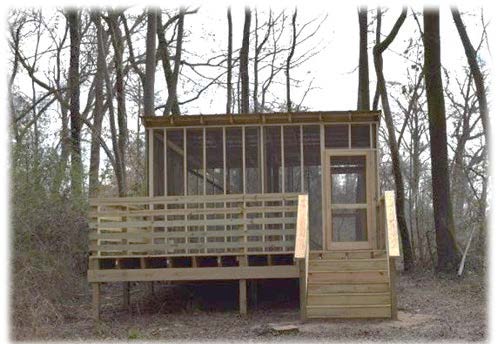 Greenville built an enclosed camping platform along the Tar River, which is great for nervous first-time campers. (Photo provided) 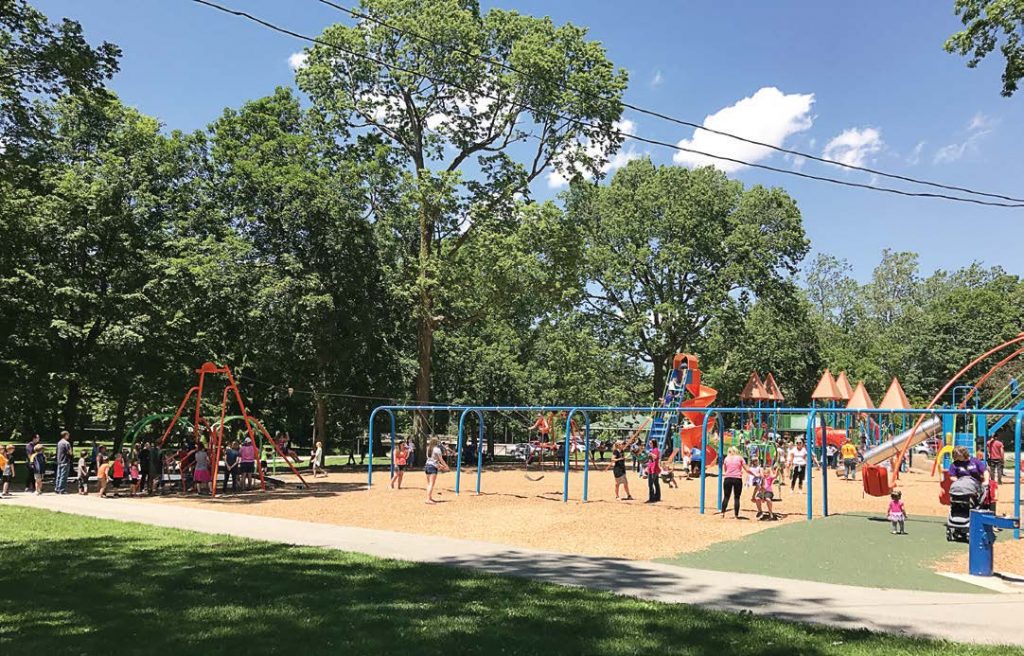 Inclusive playgrounds are being made more and more available in parks, which will bring even more visitors. This one in Kokomo, Ind., allows children and parents to interact with people from all walks of life. (Photo provided)

Many of the changes happening in Greenville, N.C., had been prepped and planned for years before action was taken. Through multiple public surveys and assessments, Greenville was able to document the needs citizens had for parks and what resources were lacking.

The two major plans are the Tar River Legacy Plan, which is a long-term program to embrace the Tar River and its surrounding environs, and the master parks plan that includes the Town Common Master Plan, which addresses a 25-acre park that rests along the Tar River. Since the parks department has plans for already existing or newly built parks, the plans are broken down into sections. Parts of each plan are selected to be worked on every year so none of them are paused.

“We used that (master plan) to prioritize projects and make existing parks better. We also had park expansions in areas of the city that didn’t have them before,” Parks Planner Lamarco Morrison said. “We let our survey run for about six months. We did a couple different surveys. In 2005 we did a comprehensive parks and rec master plan, so we looked at that again to see what the main concerns were for parks and then sent out another survey, which was left open for six months for people to comment. Then we looked at it again.”

Greenville’s two main reasons for the revitalization revolution is to improve the quality life for the community and to retain younger people in the area. Greenville is a large college town for those interested in the medical industry. Unfortunately, most graduates leave to go elsewhere. The goal is to make the city a final destination by giving people more things to do. That could lead to people staying in the area and raising a family.

“Most of our projects have been done in the underserved areas of the city,” Morrison commented. “They don’t really have the opportunity to join health clubs like swimming, so a lot of our facilities are free. It’s providing a resource and other things for people to do rather than having nothing to do and potentially getting into trouble. It’s an oasis or a safe haven in some areas.”

A lot of the facilities that already exist are being renovated into nice buildings, having more added so if people want to try something new, they have the opportunity. Another part to getting people healthy is also getting people outside in the wilderness. Many inner city people may not have seen certain wild animals or camped out before, but new nature-related parks make it possible for them to have that experience. Introducing new possibilities is what Greenville strives towards by offering classes in various sports for kids and adults.

Plans of plans for plans

Every community-impacting project has to face the challenges of budgeting headon. Staying within budget while investing in large projects is difficult, but with the right amount of grants to help and small cutbacks in the department, it’s possible to achieve. While grants and small interest loans are a great source for financial help, looking into public-private partnerships is another recommended option.

Increasing the staff is another issue that many municipality departments experience. With the expansion Greenville has experienced, making cuts and pursuing grants saved room for hiring more operations employees, who will help facilities nice.

“One thing us planners try to plan for upfront is to keep these facilities nice,” Morrison explained. “Another challenge is vandalism. Some people aren’t used to nice things around here. That’s one of the things we’re finding as we continue. We’re growing and we’re still looking to expand but wrestling with a way to plan for future maintenance. That’s always a challenge.”

Years will be spent on projects as every idea leads to more action. Greenville recently completed a large, all-inclusive playground that has doubled the demand for parking. Other projects include building a new pier, building a new plaza, plus a canoe and kayak launch all along the Tar River. A future BMX bike and skateboard park will be across 10 acres, the largest in the East. Projects from both the Town Common Master Plan and the Tar River Legacy Plan will be added to the year’s project priority list every year for the next five years.

A risk management assessment is a good route to take on any large or small scale project. Unforeseen circumstances always linger around options of opportunity so it’s important to be prepared whenever something might go wrong; otherwise, the project could be delayed or even die. Investing in a comprehensive master plan to figure out what citizens need is another must-do.

“Make it viable. Plans aren’t meant to be a wish list of the unrealistic,” Morrison advised. “Make sure that the projects are realistic based on the city’s budget and that it’s something the city council can approve of. I’ve never submitted a project that’s above on what I’m used to getting financially for projects.

“Once your master plan is approved, go look (for) grants on state and federal levels. Look into your funding resources. Never go in and build something that the community didn’t ask for. You might build this nice scenic pass, but nobody will visit it because they didn’t want it.”

Highland Park in Kokomo, Ind., is the oldest park in the local area. Established in 1892, the seasoned trees that stretch toward space can attest to the age and preservation of the park. Highland Park suffered from many natural disasters in the past few years, with over a 100 trees uprooted by tornadoes and the inclusive disability access playground demolished. Locals became emotional upon seeing the park in such a distraught state.

“People took it personally when Highland Park got hit and felt ownership of the park,” Superintendent Torrey Roe said. “They were very eager to help with the park campaign. We had a lot of the public’s and private businesses’ support in seeing that changes be made. Many people cared about it and contributed to the funding, which helped purchase some of the new playground equipment.

“The community has really supported what we’ve done financially but also in just showing up. We’ve had about 400 times the amount in attendance we’ve had in previous years. We’ve had so many people playing and picnicking, which then leads to them seeing the basketball and tennis courts available. Th e activity has grown exponentially. We actually had a lady complaining that there were too many people in the park now, which is a great problem to have.”

Kokomo’s pride is displayed in the park, which takes a more natural route. The location of the park along the Kokomo Creek presented some natural challenges to overcome when it came to implementing changes. Fighting a few floods and being delayed by rain impacted the construction projects, but the town succeeded. Clean-up from Mother Nature’s disasters and quick brainstorming with the park board on what could be done made the changes in Highland Park possible.

The parks department wanted to make sure that there was something for everyone. Originally the handicap access playground was separate from the abled playground, but both have now been joined together. Families and children aren’t kept separate; instead, they have the ability to interact with each other and not feel isolated. Kokomo received a lot of positive feedback on the new inclusive playground features. While most of what was destroyed was replaced, alterations were still made to continue the park’s legacy as a homey area. With the new playground, a new restroom facility was built and many trees were planted to replace the empty spaces.

“For every tree we take down, we add three more,” elaborated Roe. “The majority of these trees are about 50 years old. The ones we’re putting in would take quite a bit of time to grow, but future generations will be able to enjoy Highland Park in the beauty that we see now.”