The entrance to Hopewell Mound Group, a Native American burial ground 3 miles north of Chillicothe. The earthen ridge stretches 2,050 feet on a side and encases a square parcel of land containing 23 burial mounds dating from 200 B.C. to the fourth century. (Photo provided) 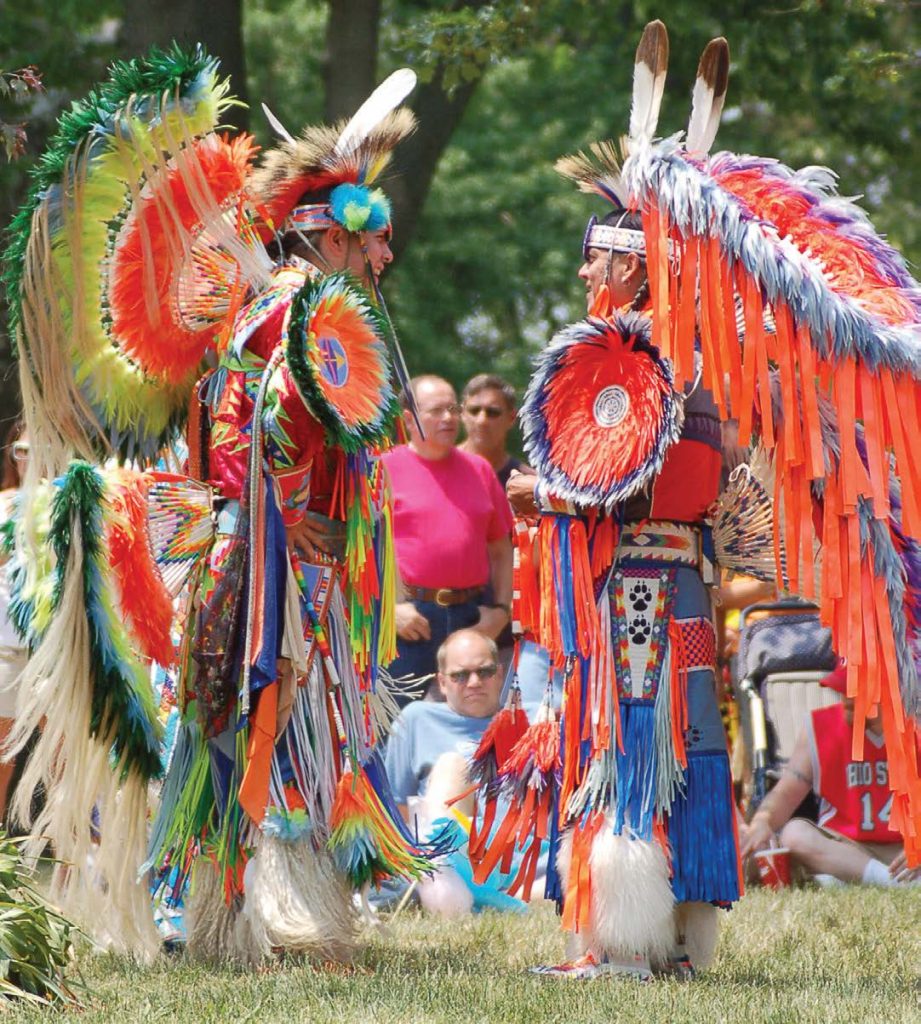 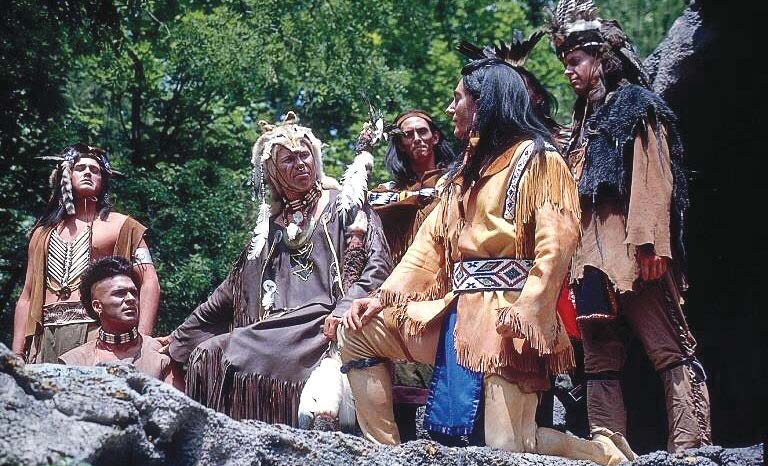 The outdoor drama “Tecumseh” has been the feature attraction at the Sugarloaf Mountain Amphitheatre for 45 years. During its summer seasons, the play about the famed Shawnee warrior chief has drawn 2.5 million attendees. The drama runs six days a week from early June through Labor Day Sunday. (Photo provided) 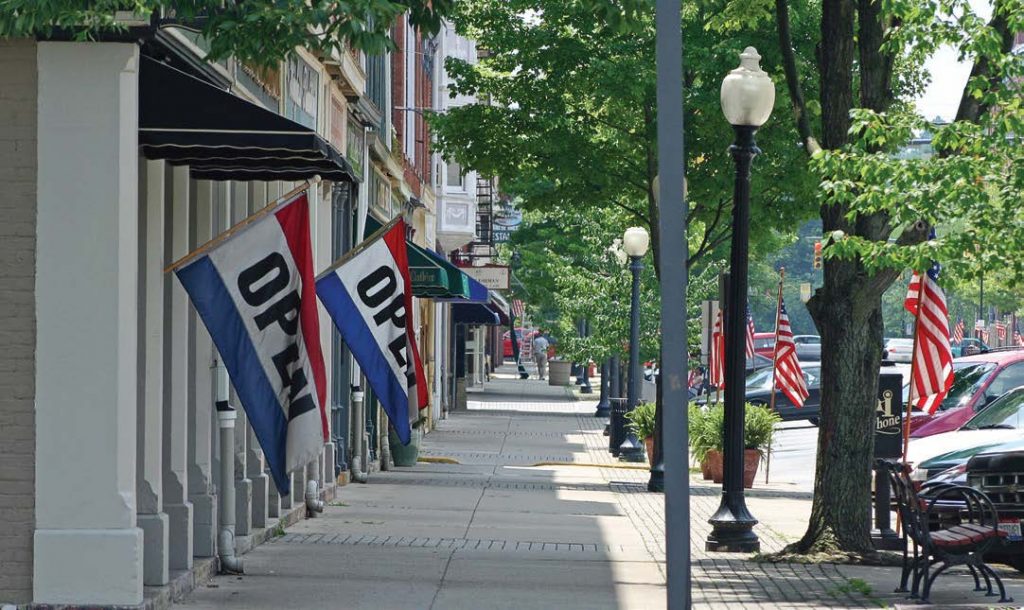 Chillicothe, Ohio, derives its name from the Shawnee word for “principal village.” Throughout the tribe’s history, villages where the divisional chief resided were called Chalahgawtha. The name migrated from village to village as old chiefs died and new ones from other villages succeeded them. (Photo provided)

Two millennia of Native American culture and customs are always front and center in and around Chillicothe, Ohio.

The city of 21,725 is bounded north and south by the largest concentration of American Indian burial mounds in the nation. The Hopewell Mound Group, centered in the Scioto River valley a few miles north of downtown Chillicothe, consists of geometric earthworks and two dozen burial mounds framed by an earthen wall 3 feet high extending 2,050 feet on a side and resembling a square with rounded corners.

The mounds were erected in various shapes, including square, circular, conical and loaf-shaped, and some rise 30 feet above the surrounding landscape.

When tribe members died, they were cremated and their remains were placed in charnel houses. Those houses were then burned. Artifacts such as copper figurines, shells and pipes were placed with the ashes and the site was covered with a mound.

The Hopewell site was first mapped in the 1840s and excavations unearthed hundreds of artifacts now preserved at the British Museum in London.

The Ohio Historical Society conducted an archaeological dig from 1920 to 1922, and in 1923 the U.S. Department of the Interior declared the Mound City Group a national monument.

The mound group was renamed and expanded as Hopewell Culture National Historic Park and is now administered by the U.S. National Park Service.

Chillicothe is also home to “Tecumseh,” a popular outdoor drama performed at the 1,800-seat Sugarloaf Mountain Amphitheatre south of the city. Now in its 45th season, the play, performed six nights a week from early June through Labor Day Sunday, has attracted 2.5 million patrons.

The eponymous drama highlights the Shawnee warrior and tribal leader Tecumseh’s struggles to coalesce a multi-tribal confederacy to establish an independent Indian nation and protect sacred homeland from American and British interlopers.

The play, which involves a cast and crew of more than 100 people nightly, was written by seven-time Pulitzer Prize nominee Allan Wesley Eckert, who also authored the book, “A Sorrow in Our Heart: The Life of Tecumseh.”

Eckert wrote more than 225 episodes of “Mutual of Omaha’s Wild Kingdom,” for which he won an Emmy Award.

The musical score was recorded exclusively by the London Symphony Orchestra and the narration sequences are presented by Oscar-nominated actor, Graham Greene, a Native American born on Six Nations Reserve in Ontario, Canada.

Even though the burial mounds and amphitheater are located outside Chillicothe’s city limits, they noticeably benefit the local economy.

“These visitors are staying in our hotels, cabins and bed and breakfasts; purchasing fuel for their vehicles; dining at our local restaurants; and purchasing souvenirs or gifts in our boutique shops,” he said. “This makes a very large impact on our local economy.”

Chillicothe also hosts the annual Feast of the Flowering Moon festival during Memorial Day weekend in its historic downtown area.

There were, in fact, several Chillicothes who dotted Shawnee tribal lands in Ohio, Missouri and Indiana.

Chillicothe is the English form of the Shawnee word Chalahgawtha, meaning “principal village.”

The title designated the village in which the regional or divisional chief resided. When the village was relocated, by war or expansion of pioneer settlement, the new settlement would acquire the name “Chillicothe.” When the chief died, the name would migrate to the village of the deceased leader’s successor.

Chillicothe, county seat of Ross County, was platted in 1796 and quickly became a hub of political influence within the Northwest Territory.

The town originally consisted of 456 lots, and during its first year, several stores, taverns and artisan shops sprang up. Two years later Ross County was incorporated, and in 1800, the territorial capital moved to Chillicothe.

In 1802, as Ohio moved toward statehood, the city hosted the OhioConstitutional Convention and became the state’s first capital when Ohio became the American Union’s 17th state on March 1, 1803.

Chillicothe remained the capital until 1810 when Zanesville, a comparably sized town 80 miles to the northeast, acquired the status in a partisan attempt by Democratic-Republicans to solidify their political control over eastern Ohio.

The capital returned to Chillicothe in 1812 until it was permanently
moved to Columbus in 1816.

For information about “Tecumseh,” visit www.tecumsehdrama.com; for the Feast of the Flowering Moon festival, visit www.feastofthefloweringmoon.org.