Wadesboro, N.C., Police Department moved into a new-to-them space that once served as a doctor’s office. After cleanup and renovation, the facility offers plenty of space while also saving the town money rather than building new. (Photos provided by Wadesboro Police Department)

The old shingle exterior of a North Carolina doctor’s office has been replaced with tidy brick and a shiny new police badge. In fact, the building underwent surgery of sorts and is recovering nicely as it serves as the Wadesboro Police Department’s new digs.

The town of Wadesboro, N.C. — population 5,467 in 2016 — had been faced with a space issue. Its police department shared the same building with the fire department across from the town hall. A 2014 Space Needs Assessment and Facility Programming Study of the fire and police building found that the police department only had 2,501 serviceable square feet, which included the separate detectives’ building.

“We had outgrown the building we were in and needed more room,” Chief of Police Thedis L. Spencer said. “We needed a building, and by locating (to) an empty edifice, we saved taxpayers money and the town didn’t have to raise taxes to fund an already-existing building. I would guesstimate we saved $500,000 to $600,000 in not starting from scratch with a new building.”

According to Town Manager Alex Sewell, the new space encompasses more than twice the amount of the old one, with 4,658 square feet in the main department building and 1,825 square feet in a separate storage building. 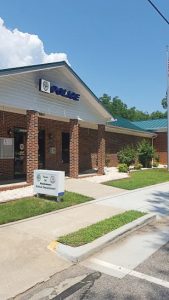 A great deal of work went into the new police department offices, including dedicated volunteers from all walks of life. Not only officers on their days off came to help, but ordinary citizens also looked for ways they could improve the building and property. And while professional assistance was used in some critical areas, again, it was the volunteers’ work that cut down on costs. The building’s windows were tinted for security, and doors and offices were kept locked, further enhancing security. A kitchen space with tables and chairs offered in-house meal breaks.

Other rooms included a secretary’s office, an office for Chief Spencer, a shared sergeants’ office, extra storage rooms, a room for outside agencies to work in, an interview room and meeting rooms.

The location, building condition, space, cost and layout of the offices all played into the decision to adapt the police department to an existing facility.

“The property changed dramatically from start to finish, including new roofing, flooring, painting and technology,” said Sewell. “Our town council was very supportive in allowing us to be creative. To make this project a reality the staff did quite a bit of work internally and the community was very generous and supported the project through donations.”

Spencer agreed, saying that to save money, several officers on their days off did a lot of the painting and cleaning.

“We also had talented carpenters that worked within the agency,” Spencer said, adding that contractors were also used and that several businesses and organizations donated materials. “I would estimate the project saved the town at least $1,000,000 compared to new construction.”

Asked what the greatest challenges were in renovating the new space, Spencer said evidence security was one.

“Also, we needed to make sure the department of the future would continue to serve the public needs and the law enforcement operational requirements,” Spencer said. 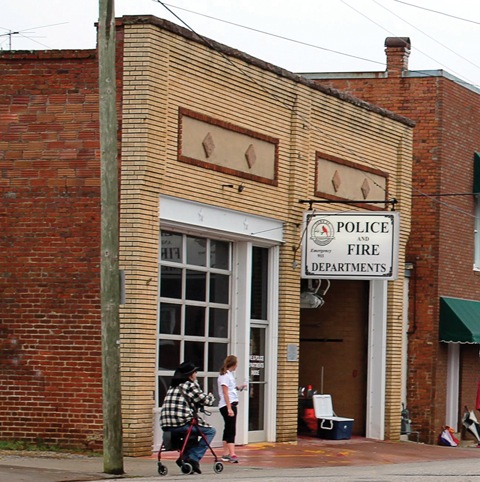 If police departments in other towns are deciding between moving to an existing building, Spencer has advice to offer.

“If they could find an existing building that could fill their needs, an existing building is the way to go,” Spencer began. “At the same time, it would save thousands of dollars, but definitely officers need to have great input in the remodeling of the building. These officers would know daily operations and could articulate what they need in the way of changes.”

Moving to an existing building would seem like the ideal solution for government offices that are running out of space, or that are facing mold or roof leaks, but potential movers should also be aware of other things.

One is that the building must be ADA-compliant or must be renovated to be so. There may be a need for ramps, for wider restrooms, for public phones with T-coils, or for extra wide room for service animals and power-driven mobility devices. Cities can hire an architect to do a walk-through a building to help determine these factors. Federal tax incentives also might be available to help with ADA costs.

Guests and supporters attended the new police station’s official ribbon-cutting ceremony last December. While there, they were able to tour the facility and seen the grand result.

As for other changes made or planned for 2017 at Wadesboro’s new police station, Spencer said the parking lot and a generator were high on the list. Officers raised the money to install cable for visitors in the lobby, and the county donated the flagpole. There is still work to be done, but the majority is completed.

The erstwhile doctor’s office, then, is well on its way to full operating speed under new, blue-uniformed management.