One up and coming method of improving water quality is reconstructing alleys. Cities are noticing that green alleys are not only able to help reduce flooding issues, but also remove pollutants and urban runoff from stormwater so that it enters the ground more gradually.

The green alleyway project in Dubuque, Iowa, began when Mayor Roy Buol came into office in 2006. Since one of his platforms was making Dubuque more sustainable, the city began researching and visiting other cities to find ways to improve water quality and reduce flooding.

According to Joe Dienst, civil engineer II for the city of Dubuque, the existing alleys were badly deteriorated and had previously been done in brick, which made performing repairs more difficult. Dienst stated that, in 2009, “As a way to improve the alleys and to reduce stormwater runoff and improve water quality, two alleys were reconstructed as a pilot using Community Development Block Grant funds. An alley was reconstructed using interlocking concrete pavers and another alley was reconstructed using porous asphalt. As a result of this pilot, the city council selected interlocking concrete pavers for the paving type going forward.”

Interlocking concrete pavers were chosen for the Dubuque green alleyway movement since they worked best for any future potential maintenance issues with utility companies. To ensure that these are the best options, the city coordinated with utility companies, though they have not done any reconstruction near water or sewer utilities. Public works trucks have even configured their trucks to help clean out the alleys.

When it comes to how the concrete pavers make alleyways green, Dienst said, “The new alleys allow water to infiltrate between the pavers into a storage volume of clean stone. This water then eventually infiltrates into the ground or slows the release of the water into the storm sewer. The slow release of the water allows for pollutants to be removed and water quality improved. The new alleys are helping to infiltrate water, thereby reducing flooding and improving water quality.” The latter is particularly important since Dubuque is right next to the Mississippi River.

While roughly 80 alleys have been reconstructed thus far, Dienst is working with the city on plans to reconstruct approximately 100 more alleys within the watershed over the next 20 years.

Dienst mentioned the city used an innovative way to fund the green alley project. He said, “The city constructed six more alleys under our annual green alley project where one or two alleys would be reconstructed a year.” The city used Iowa’s State Revolving Fund loan to finance the city’s wastewater plant reconstruction. He added, “As part of the SRF loan, the state offered a program to divert the interest due on the loan to clean water projects. The city used this program to fund the reconstruction of 73 alleys using this program totaling nearly $9.4 million.”

The residents of Dubuque appear to be having favorable reactions to the new alleyways. Dienst said, “City staff is getting calls from citizens asking when their alley will get reconstructed. This occurs even though the abutting property owner pays a special assessment of roughly 15 percent of the cost. The city picks up the remainder.” 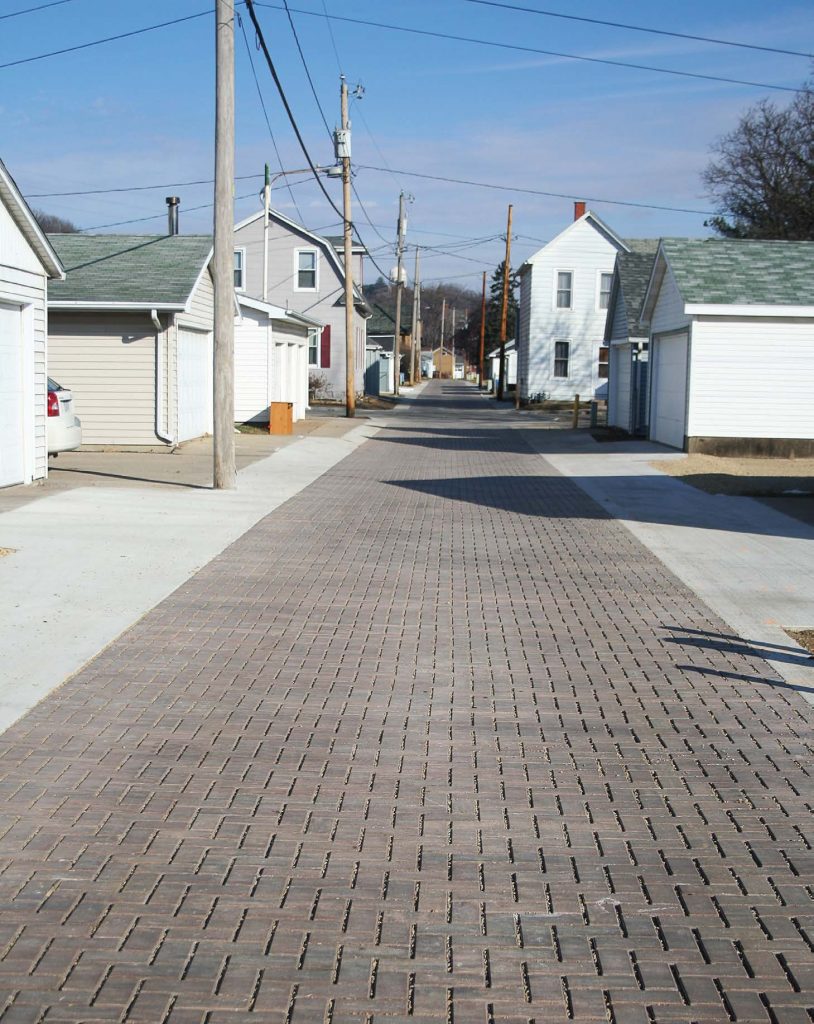 During a pilot program in Dubuque, Iowa, the city tried two different green alley options — porous asphalt and interlocking concrete pavers. The city collaborated with utility companies and chose to use the concrete pavers moving forward since it will be easier to correct future potential maintenance issues. (Photo provided by the city of Dubuque)

In Berwyn, Ill., the green alleyway project began under the direction of Mayor Robert Lovero as the city began to search for various solutions to flooding issues. Ruth E. Volbre, assistant city administrator, stated, “Our engineering team, under the mayor’s direction, began to look at the different options available and one of them was the green alleys. The first thing that the engineering department had to do was to do an inventory of all of the city’s alleys. They looked not only for which were in the most need of repair, but they also had to test the soils. Sandier soils are required for the best drainage.”

Volbre added, “The purpose of the project is to promote green infrastructure as an effective means of stormwater management. The existing alleys currently do not allow for stormwater to permeate into the soil and reduce urban runoff. The new alley will allow for stormwater to be temporarily stored and then permitted to infiltrate into the subgrade. By allowing the water to infiltrate, this will lessen the amount of urban runoff that enters the sewer system.”

Once the engineering department had identified the alleys that would best qualify for the green reconstruction, they began to work on acquiring grants to get the necessary funds and make the reconstruction possible. The funding is currently being made possible through joint efforts between the city of Berwyn, the Illinois Environmental Protection Agency and the Metropolitan Water Reclamation District of Greater Chicago. As the city continues to convert more alleys into green alleys, they will look for more grants.

Currently the city is working on the replacement of 10 alleys with green infrastructure. According to Volbre, “Residents who are in the vicinity of the alleys are very happy to have this amenity. The only downside is that they cannot access their garages via the alley for about five weeks — the time to complete the alley.” 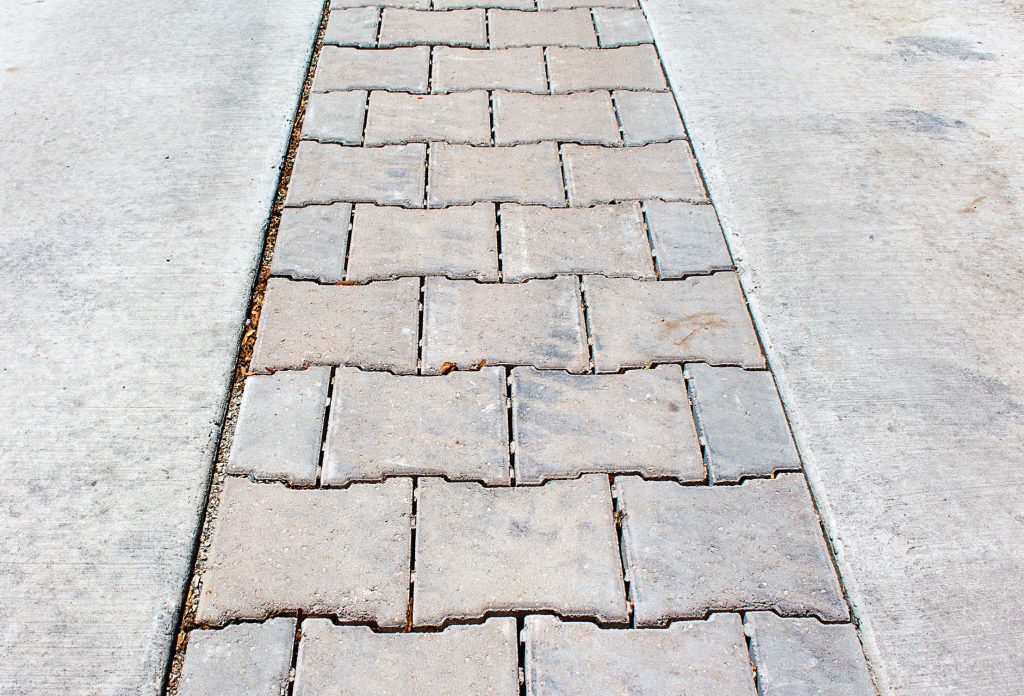 In order to combat flooding issues in Berwyn, Ill., the city researched various options, including green alley infrastructures. Pictured is a closeup of the material they are using to reconstruct their alleys. It allows stormwater to permeate the soil, reducing urban runoff. (Photo provided) 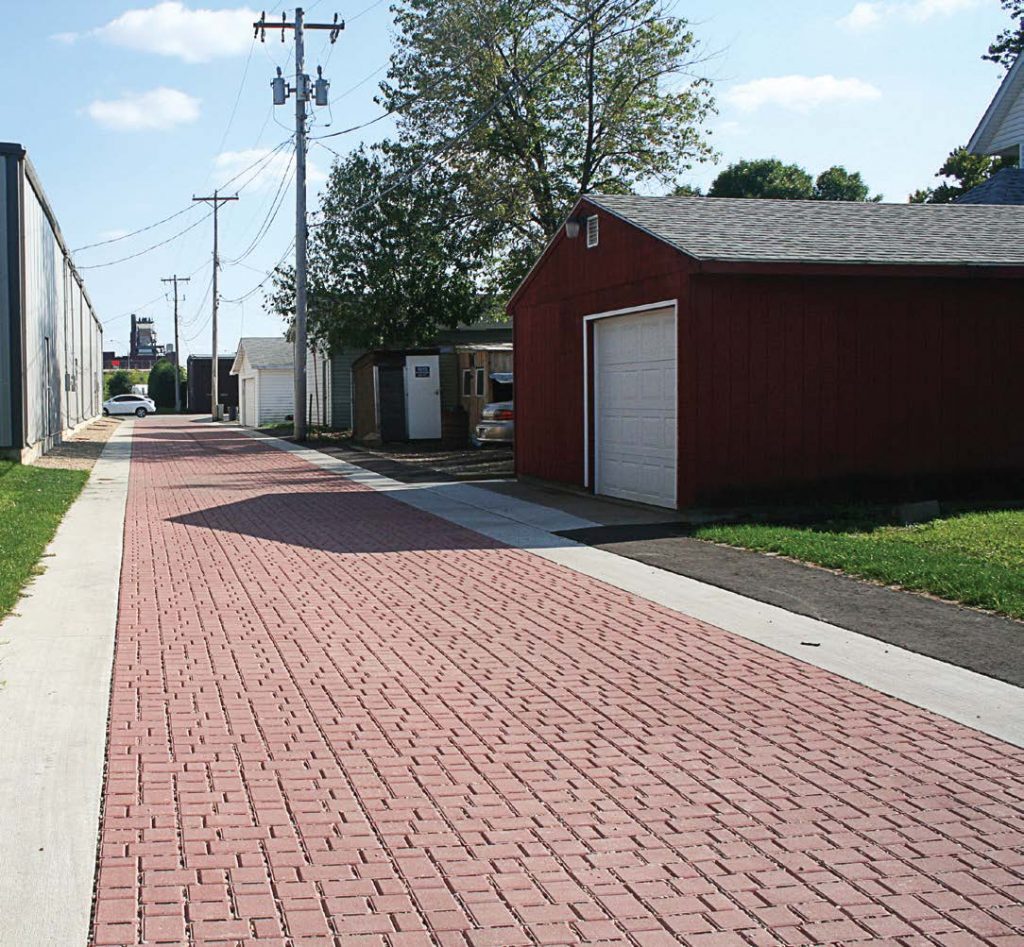