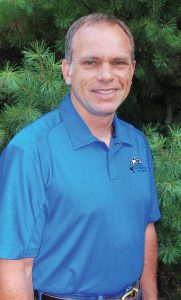 Shane Tatom, owner at Indiana Automotive Equipment and creator of the Turf Rail

Shane Tatom saw a need in parks departments, golf courses, airports and the turf industry as a whole for a way to safely and efficiently work on the wide range of equipment that enters their shops daily. The solution was an attachment for two post automotive lifts that was designed to pick up turf and all-terrain equipment by wheel engagement — Turf Rail.

“You can lift and work on a car and then work on other (smaller) pieces of equipment,” Tatom said. “The attachment was created specifically for a parks department in Ohio that was struggling with finding one piece of lifting equipment that would not only lift their turf equipment for easy access for service and repairs, but also lift the wide range of cars and trucks they use for the multiple parks and golf courses they maintain.”

He created a prototype and then took it to The Great Parks of Hamilton County, Ohio’s, shop. After a month of use, the park district critiqued Turf Rail, allowing Tatom to take that information and make changes, resulting in four different prototypes. The entire process proved exciting for everyone involved.

“After seeing the excitement of the employees who tested my product and the ability of the Turf Rail to lift a wide range of equipment, I filed my patent paperwork and began to critique my design to have the best product I could produce for the safe and effective lifting (in) both the outdoor and automotive industries,” Tatom said.

Turf Rail fits most surface mounted two post lifts and takes up less space than four post systems — a major plus in a shop where space is critical. Tatom noted, “The Turf Rail, when combined with a two post automotive lift, will allow maintenance and repair facilities the ability to lift small equipment with wheelbase ranges from 26 inches up to 120 inches and capacities up to 7,000 pounds.”

Unlike other similar systems that might take hours to install, Turf Rail only takes between a minute or two. It also offers great versatility by allowing technicians to easily switch between turf lift and arm engaging lift.

“You can literally go from working on a mower or a Bobcat to working on a car or a van,” Tatom said. “Shops would have to buy two lifts to cover the range of product we can with one lift.”

And most importantly, Turf Rail increases safety in the shop, with Tatom commenting, “(technicians) have never been able to work so safely.”

Rather than laying on the ground or kneeling in awkward positions, technicians can work standing beneath the vehicle or piece of equipment, with service height ranging from zero to 70 inches. According to Herb Tatem, equipment service manager for the Indianapolis International Airport, “After using the Turf Rail System for a while, I was asked what I thought of the product, and the first word that came to my mind was ‘safe.’ My men love it. They work on a wide range of equipment, and to not have to lay on the ground or try using a crane to lift partially has changed the way we service our equipment.”

A month after launching his website, Tatom said he was contacted by Snap On Tools and Equipment and is now selling Turf Rail to it. “They just released the product across the USA, Mexico and Canada through their distributors in the Snap On lifting brand of equipment called Challenger.”

In the fourth quarter of 2017, Turf Rail will also be available in the NAPA Real Deals catalog and in the publications of Pep Boys, O’Reilly Auto Parts, Advance Auto Parts and Auto Zone. Tatom added, “My company and Snap On/Challenger Lift are the only two companies offering the Turf Rail product.” 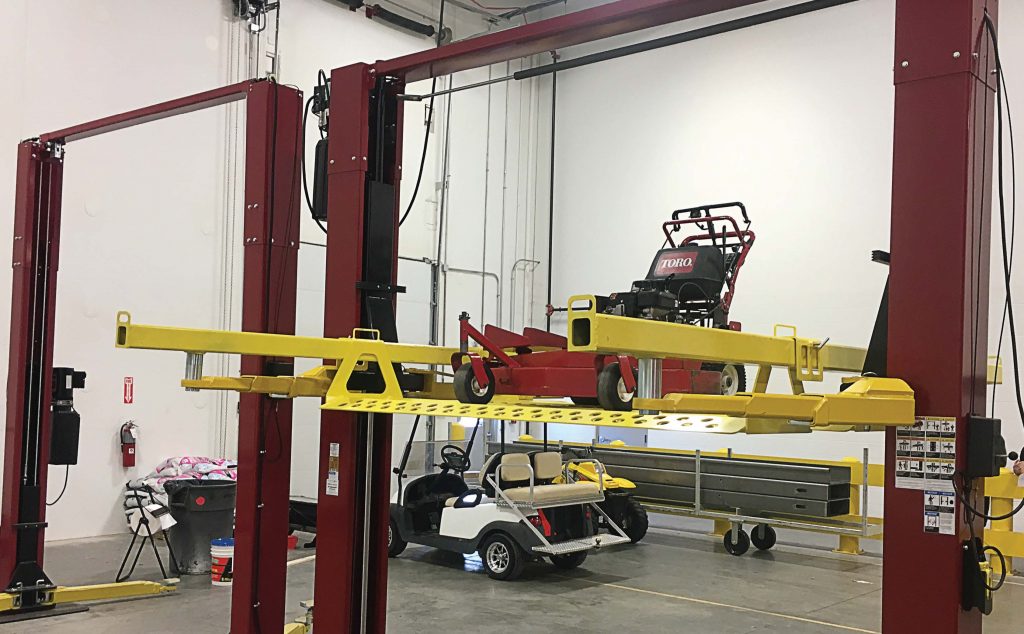 Turf Rail allows parks departments, golf courses, airports and the turf industry as a whole work safely and efficiently on the wide range of equipment that enters their shops daily. (Photo provided) 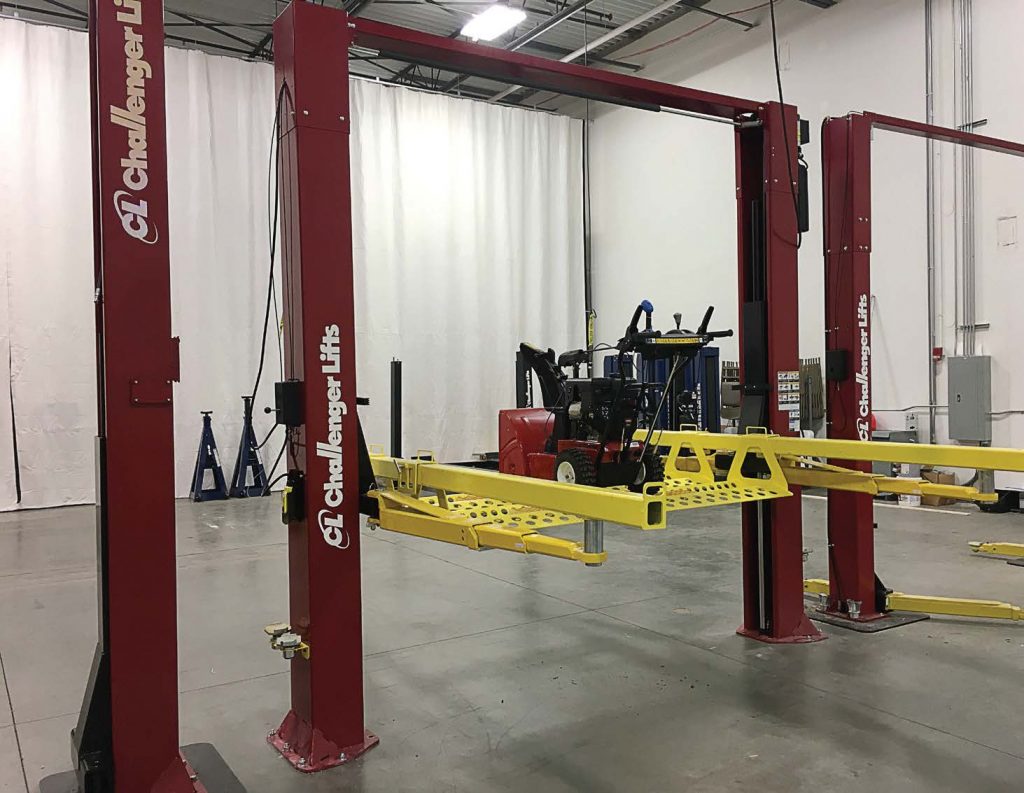 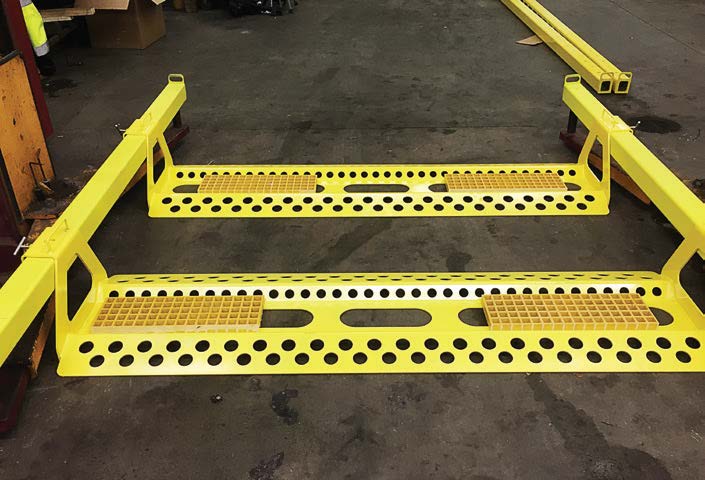 Turf Rail only takes between a minute or two to install and allows technicians to switch from working on smaller equipment to larger vehicles. (Photo provided) 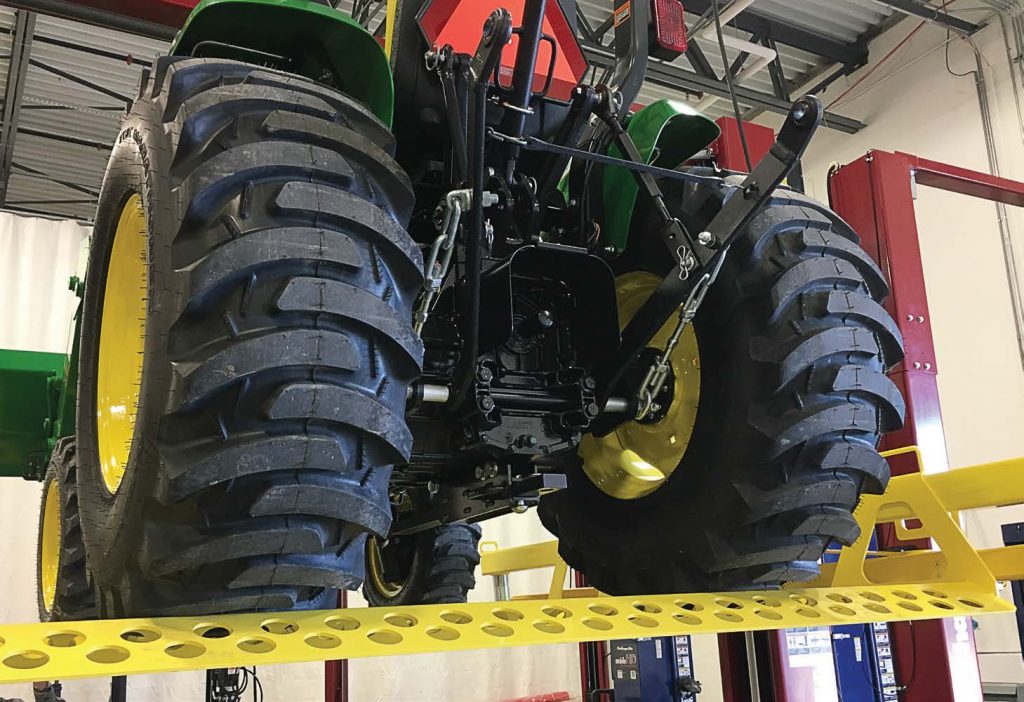 With Turf Rail’s service height ranging from zero to 70 inches, workers no longer need to lie on the ground or kneel in awkward positions, making their jobs easier and safer. (Photo provided)