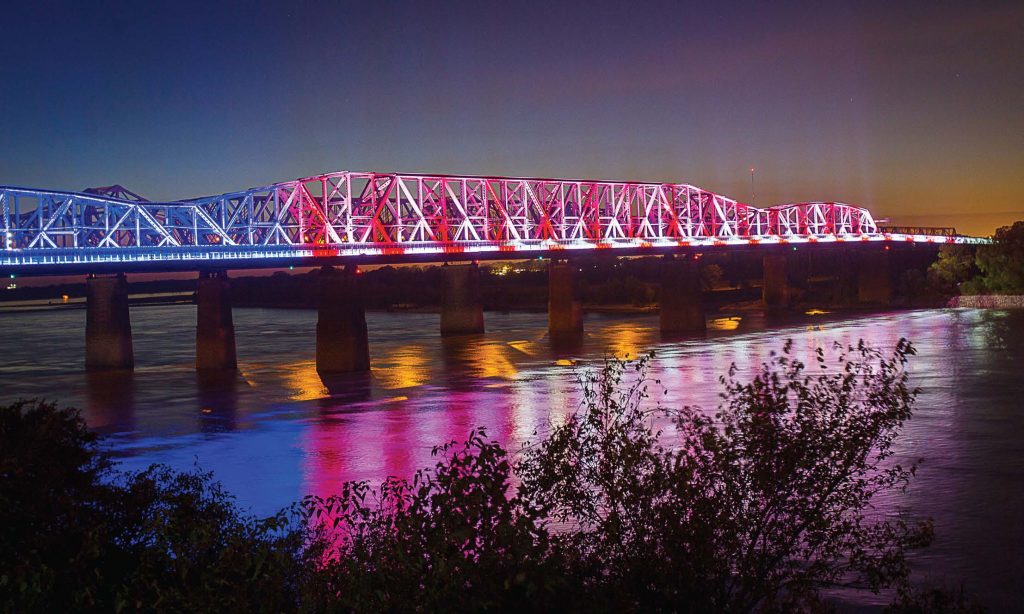 Big River Crossing, which connects Memphis, Tenn., and West Memphis, Ark., over the Mississippi River, can be lit up to commemorate special events. Here it can be seen lit up like a large American flag for holidays such as Independence Day. (Photo provided by bigrivercrossing.com)

Using lighting to send a message is becoming more prominent in municipalities across the country. Lights can be used as celebration for holidays and to show solidarity with other cities and countries when tragedy strikes such as in France, Belguim and Orlando, Fla.

Local citizens thought it would make a good bike and pedestrian trail, so a local entrepreneur and philanthropist, Charlie McVean, teamed up with Congressman Steven Cohen to make it a reality. McVean filled two private planes with prominent Memphis citizens to travel to Omaha, Neb. They successfully convinced Union Pacific Railroad to work with Memphis, Tenn., to build Big River Crossing.

Congressman Cohen then led the effort to secure a $15 million federal transportation grant to lead project funding. Countless partners worked together to raise the public and private funds necessary for completion.

The bridge opened on Oct. 22, 2016, and houses over 80,000 energy-efficient LED lights provided by Philips Lighting. According to Greenstein’s information, the number of lights “offer an expanded palette of more than 16.7 million intensely saturated colors or finely tuned pastels and hues in a variety of beam angles so that the full volume and depth of the bridge is showcased.”

Hundreds of possible configurations and light distribution patterns are available, including “static displays or dynamic color shows that can be programed to commemorate special events, holidays and important civil causes.” It was recently pink for Easter, green for Earth Day and the colors of Colombia’s flag as this year’s honored country in the Beale Street Music Festival.

In the first six weeks alone over 65,000 pedestrians and cyclists experienced Big River Crossing, which introduces a “grand, unmatched perspective of the Memphis skyline and rushing Mississippi River.” It also won the prestigious American Architecture Award, which was juried in Athens, Greece.

The locals are experiencing a revived affinity for the waterfront thanks to Big River Crossing, and the interconnectivity between Memphis and Arkansas has positively affected the economic development of the trailheads. Property values of homes with a view of the bridge are also expected to rise. The bridge, linking not only two towns but two states, “marks a physical and metaphorical feat of the tristate Greenprint development, serving as a driver for continued developments in the area.” 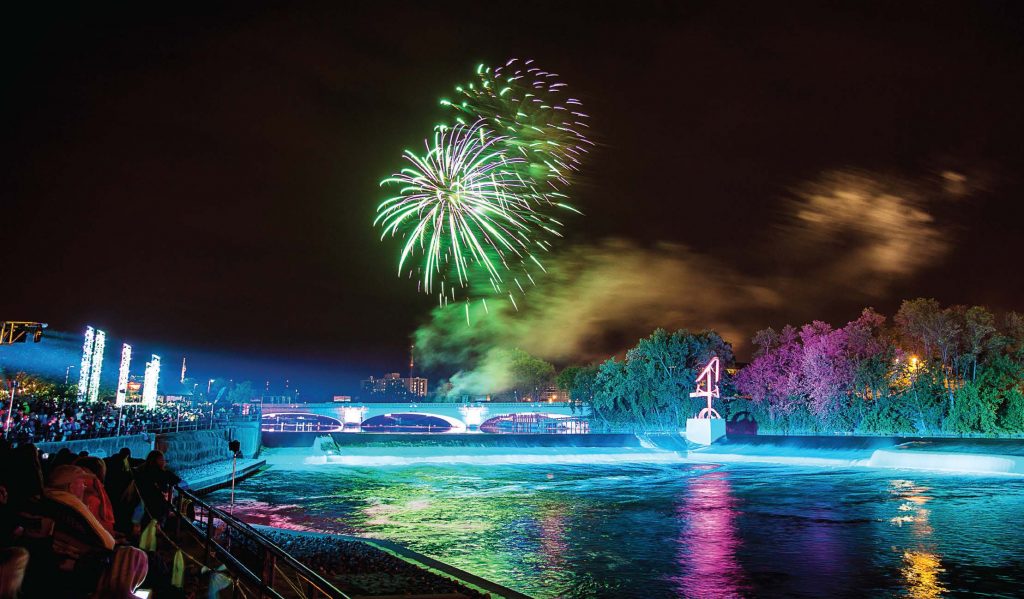 Downtown South Bend, Ind., has become a “must see” destination, partially thanks to the River Lights. The lights turn the St. Joseph River and Riverwalk into a canvas that can also be interactive. It helps attract many summer festivals. (Photo provided) 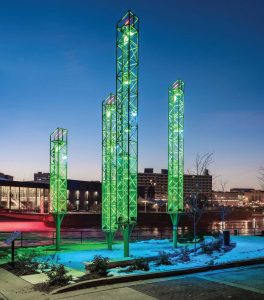 The South Bend River Lights are lit up with special colors for holidays, for example red and green for Christmas; however, they can be changed at any time to reflect the city’s mood. (Photo provided)

In order to create a “must-see” destination with a light display that wasn’t purely ornamental, Aaron Perri, executive director of South Bend, Ind., Venues, Parks and Arts, worked with artist Rob Shakespeare. The South Bend River Lights were installed in 2015 as a part of the city’s sesquicentennial celebration.

As part of the interactive display, Shakespeare “designed built-in programming that responds to various movements at eight different sculptures on each bank of the river. In addition to the interactive element, the artistic display of light changes cycles through various shows each evening – turning the cascades and bridge into a dynamic and artistic canvas.” The lights also have “secrets,” according to Perri, such as the ability to tell time and flashing the time in synchronicity at the top of each hour. The River Lights change seasonally with special colors for holidays and settings for major victories by Notre Dame or the South Bend Cubs.

Perri stated, “The lights can be changed to reflect the city’s mood at any time. Our city has come together at the River Lights to stand in solidarity with France, Orlando and Belgium. We honor our police force and celebrate alongside community organizations. The night Prince passed away, it was raining so the lights quickly got in the spirit to pay homage via a ‘Purple Rain’ display.”

The River Lights total project cost was approximately $800,000 and has become a symbol of civic pride that also evokes emotion. It was funded almost entirely by private donations, corporate gifts, grants and donations of material and labor. However, according to Perri, the city is hoping “to expand upon its success by introducing complementary light installations along other portions of our Riverwalk.”

Although costly, creative lighting displays send their own message that the city is a place to visit. Not only do light displays help make the city a destination for tourism, they can also bring about a greater sense of unity and pride within the community.

Over 80,000 energy-efficient LED lights are housed in Big River Crossing. These lights
were provided by Philips Lighting. They opened the gates on Oct. 22, 2016, and over 65,000 pedestrians and cyclists experienced the bridge in the first six weeks. (Photo provided by bigrivercrossing.com)