Autonomous vehicles are leading headlines, with expectations that by 2020 there will be nearly 10 million cars with defined self-driving car features, according to a report from BI Intelligence. Motley Fool noted in August 2016 driverless cars could save about 33,000 lives every year in the U.S. alone. “We could see up to 90 percent reduction in traffic fatalities and save about 10 million lives worldwide every decade,” Chris Neiger wrote in his article “12 Jaw-Dropping Driverless Car Facts.”

While this statistic is promising, autonomous vehicle technology is not there yet, as seen by a fatal crash May 7, 2016, in Florida. The autonomous car, on a bright day, failed to detect an 18-wheeler that was making a left-hand turn, resulting in the automatous vehicle going under the truck and killing its driver who made no evasive maneuvers. The truck driver noted he had heard a “Harry Potter” film playing from the other vehicle.

Some driving events prove too complex for self-driving vehicles’ algorithms to deduce the proper action.

While fully autonomous vehicles remain in the future, there are autonomous features making appearances in vehicles across the market.

“My fear is that with a lot of the autonomous features being placed in vehicles now drivers are starting to lose their safe driving habits,” Phil Moser, vice president of Advanced Driver Training and a former accident investigation reconstruction specialist with the Philadelphia Police Department, said during his presentation at the 2017 NAFA Institute & Expo in April.

He warned drivers can become too dependent on technology, allowing drivers to become dumb and lazy. Using as an example the calculator, he said, “We used to be able do long division with a piece of paper and a pencil, right? Now it’s seven times nine plus eight, hold on let me get my calculator out. Really these things have made us dumb … We’ve become too dependent on some of this stuff. I’m not saying that we are less intelligent; I’m just saying we’re not as versed as we used to be. The same can happen with driving.”

“In two years, we had a 14 percent increase in fatalities,” Moser said. “I think a lot of that has to do with distraction, and I think electronics have a lot to do with that distraction.”

During the years of decreased fatalities, seat belts — along with airbags — played a vital role in reducing deaths in vehicle crashes. Seat belt usage grew from 14 percent in 1987 to 87 percent in 2013. Moser explained increased usage owed a lot to public service announcements, education and enforcement of seat belt laws — to the point seat belt usage became a habit for vehicle passengers.

However, some autonomous safety features have contributed to bad habits. Still, Moser said, “I love it (autonomous features); I love all that stuff. Anything that will save (lives)… But we haven’t used the stuff properly.”

If a driver is dependent on automatic forward-collision braking and not scanning ahead, the people behind might be caught off-guard when the feature suddenly kicks in. Technology can also fail. He noted some people have turned off features like lane departure because they kept getting false readings. Similarly, features like blind spot notifications can miss something. In other instances, drivers might feel comfortable doing other things while driving, such as texting, because they have certain features.

Ingrain good habits in your fleet

Drivers should not become too dependent on technology, including backup cameras (Shutterstock.com)

Electronics are considered by many to be the main culprit in distracted driving. Moser recommends banning the use of electronic devices in vehicles by completely shutting them off, noting even notification sounds can have a Pavlov’s dog effect on drivers. (Shutterstock.com)

Pictured are U.S. crash fatalities. In 2015, fatalities increased for the first time in decades to 35,092, or 97 deaths each day. 2016 saw an additional increase by 6 percent to 37,198 deaths. Distracted driving is considered to be a factor in these increases. (Data provided)

When it comes to fleets, Moser stresses the need to develop good habits by cultivating positive attitudes in drivers. And while he does not work with many municipalities, he advised, “Don’t just throw someone into a dump truck, or a car even. They might have a driver’s license, but they might have spent most of their life riding the bus.”

At the very least, cities and towns should check motor vehicle reports, with Moser saying, “Anyone can do those. You have to be prepared.”

Moser, who served as a police officer, recounted while he was with a borough in Pennsylvania, a snowplow driver had been involved in an accident. The driver had a suspended license and ultimately lost his job. Fortunately, there had been no injuries. “They hadn’t done a records check.”

Even if records clear, cities and towns should complete an evaluation of a driver to ensure they are able to drive and can drive the specific vehicle they will be using for the job, which includes having the proper license. This evaluation requires further considerations, with Moser posing the questions: Who will do the evaluation? Who knows what driving will be required?

“It could be another driver with good standing,” he said.

An additional step is training. Moser noted many drivers don’t know basic rules, such as the three second following rule, keeping enough space when stopping so the rear tires of the vehicle in front can be seen or even how to routinely scan their surroundings.

“These are little things they are not aware of,” Moser said, noting while they are common sense, municipalities need to discover a way to have their drivers buy into them. This is particularly true for the younger generations of drivers who have never been without the internet.

He explained studies have shown hands-free cellphones are just as dangerous. “There is more focus on the phone than if there is someone beside you in the passenger seat,” Moser said, adding passengers in the car will be quiet when the situation requires it or let the driver know to “look out,” something someone on a phone cannot do. “Hands-free is no different. Every study has come up with the same results.”

Policies, according to Moser, need to address electronics and be supplemented as technology changes. Policies should also include backup cameras installed in vehicles alongside smartphones. “Cities would be crazy not to address that issue,” he said of backup cameras.

This technology, Moser said, does not negate the need to do a walk-around as the camera only shows what is directly behind the vehicle and has resulted in drivers hitting poles and other objects off to the side as they back up. “If someone gets hit, the lawyers will bring it up: ‘Did you have a policy in place?’ … In civil litigation, everything is admissible.”

Moser noted backup cameras have their uses, such as if a child darts behind a vehicle and for depth perception, but they don’t give a full view of surroundings. Walk-arounds and looking over the right shoulder still remain the best course of action.

“We have to make sure that our drivers are aware of what is going on and they aren’t too dependent on technology,” Moser said. “They have to be safe. They can’t lose their safe driving habits.” He noted if there is an accident, it’s the city’s name and logo on the vehicle people are going to see. 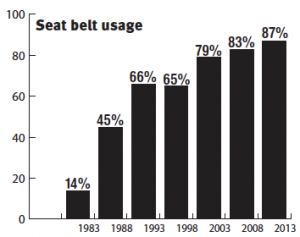 Moser said he hopes one day his grandchildren will not have to worry about crashes. “I look forward to that day,” he said. “But until vehicles are talking with each other, it’s not going to happen.”

And even when that technology becomes reality, there are some dilemmas that remain to be seen: Namely, when presented with a group of children in the roadway or crashing into a tree at the side of the road or a tractor trailer, which would the car chose to hit? “They are preprogramed,” Moser said. “Who is going to make those decisions? It’s going to have to make a split second decision, probably quicker than we can as humans. But what decision does it make?”