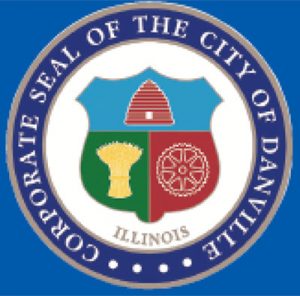 It is not always easy to distill the diverse industries of a municipality into a single seal, but Danville, Ill., has done just that.

Danville was founded in 1827 on an 80-acre parcel, and the sale of lots began April 10 of that year. The first post office was established the following month and city fathers Dan W. Beckwith and Amos Williams drew up a plat map. Agriculture was a vibrant component of the community’s economy. Later, Danville became a major industrial city in the late 19th and early 20th centuries.

The city, now hosting a population of 33,027, became one of only four junctions in the United States accommodating four major railroads — from Cleveland, Cincinnati, Chicago and St. Louis — in the mid- and late-1800s. The original train station was named “The Big Four.”

For a time, Danville was home to Western Brick Company, the largest paving brick manufacturer in the world, and several buildings, including the football stadium, at the nearby University of Illinois, were constructed of that brick. Western bricks were also used to lay the track at the Indianapolis Motor Speedway.

So, it is not surprising the city seal would include symbols of the industries most responsible for the city’s growth. “The seal contains a sheaf of wheat, denoting agriculture,” said Sue Richter, director of the Vermilion County Museum. “Now the crops are corn and soybeans, but back then it was mostly wheat.”

The gear symbol is “the wheel of industry,” according to Scott Eisenhauer, Danville’s mayor since 2003. “It is reflective of all our industries.”

The other symbol, said Richter, “is a beehive kiln where bricks were baked.”

Eisenhauer explained the colors of the seal. “The maroon represents the brick, the blue — as in blue-collar — has traditionally been the city’s color and the green is for agriculture.”

The shield-like shape of the seal was simple coincidence, according to Richter. “That’s just the shape they had.”

But the overall meaning is clear: Danville stands as a monument to the balance of agriculture and industry in the making of a robust town of honest laborers in America’s heartland.