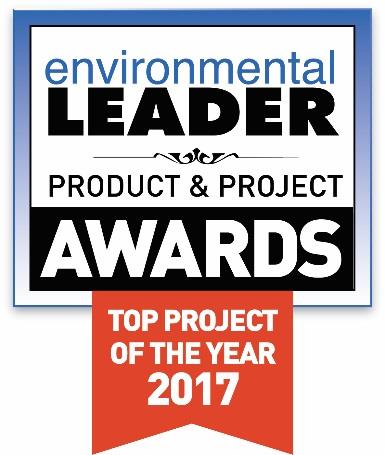 NASHVILLE, TN – (June 7, 2017) – For the second time in less than 30 days, Aries Clean Energy’s gasification plant operating near Nashville has received recognition as a sustainability success. The latest award is national in scope, presented in Denver this week, from a leading environmental publication naming the facility a 2017 Top Project energy category winner.

“Having Environmental Leader choose our facility as one of the Top Projects in the country really puts us in impressive company,” said Aries CEO Greg Bafalis. “The list of current and former winners reads like a who’s who of American industry, and we are very proud our patented technology and design work has been included.” Other 2017 winners of Top Project awards include such companies as General Motors, 3M, Lockheed-Martin, and Ingersoll Rand.
The Environmental Leader Product & Project Awards recognize excellence in products and services that provide companies with energy and environmental benefits, or in corporate projects that improved environmental, sustainability or energy management and increased the bottom line. It is a five-point rating system designed to offer companies feedback and recognition. Third-party judges came from national and international companies including: AT&T, Kellogg, LNS Research, Marriott, Panasonic, Safeway, Sears Holdings Corporation, Sierra Nevada Brewing Company, and Tyco Global Products.

Judges considered the clean-tech waste-to-energy plant located in Lebanon, TN, an exemplary project. “This is such a great example of sustainability and could be a wonderful model for the rest of the world,” one judge said of the public/private gasification project. “They are using systems thinking to reduce waste, produce renewable energy, capture heat that normally would be wasted, and are also producing biochar which has great agricultural benefits.”
Another judge added, “A great example of how to increase government’s productivity while also reducing their environmental impact.”