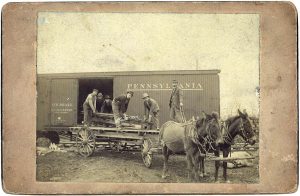 During the late 19th century, hundreds of German and Swiss settlers arrived at the Hohenwald train depot in boxcars such as the one depicted, enhancing the population of Hohenwald and establishing the adjacent village of New Switzerland. Territorial and cultural clashes resulted in litigation, and a judge merged the two towns under the name of Hohenwald. (Photo provided)

Augusta Smith named the Tennessee town she and her husband, Warren, founded in 1878 Hohenwald, the German word for “high forest,” a descriptive term referring to the surrounding countryside and its location on the Western Highland Rim a few miles west of Nashville.

The German immigrant couple, with their young son, Frank, “camped under the wide-spreading branches of some oak trees at the crossroads on the Falliss old place in Lewis County, Tenn.,” according to an affidavit Frank signed in 1924.

“The Falliss place had not been inhabited since the (Civil) War, and at the time of the Smiths camping there, was but a barren sedge field. Within two weeks a plain, three-room box house was built and the campers moved into it. This was the first house built at this place after the war.”

The affidavit continued, “Smith looked to the future of the place, and prevailed on A. P. Grover to move to the Falliss crossroads and put up a store. Will Webb came from Mattoon, Ill., and established a blacksmith shop. A town well was dug, and a schoolhouse built. A pony mail route was changed so as to serve the infantile community, as a post office was created.

“A reception was given to the lone horseman who carried the first mail in the little hamlet. He was welcomed in a brief speech by Warren Smith and presented a luscious cake by Mrs. Smith amidst the assembled residents.

“God bless the town my mother named and all who dwell therein forever.”

Hohenwald blossomed in the 1890s when the Nashville, Chattanooga and St. Louis railroad was built through town.

Warren Smith and Swiss-American J. G. Probst launched a plan for developing an adjoining Swiss colony to the south and advertised the news in German-language newspapers throughout the Midwest.

The new town, called New Switzerland, was platted in perfect squares crosshatched by streets measuring in width from 60 to 80 feet.

Swiss immigrants populated the fledgling colony and soon conflicts arose in a clash of cultures between the original inhabitants of Hohenwald and the newcomers of New Switzerland.

A courtroom battle ensued, with the judge decreeing a merger of the two towns under the name Hohenwald.

In 1897 Hohenwald became the county seat of Lewis County, named for famed explorer Meriwether Lewis, who died in 1809 under mysterious circumstances while staying overnight at a nearby inn.