Before Theodore Roosevelt was inaugurated as president the oldest working fireboat had already begun serving the city of Buffalo, N.Y. In November 2016, the Edward M. Cotter fireboat turned 116 years old. Even today it is still used as a functional fireboat as well as an ice breaker on the Buffalo River. John D. Sixt III is currently in his second season as the Cotter’s captain.

History of the Edward M. Cotter 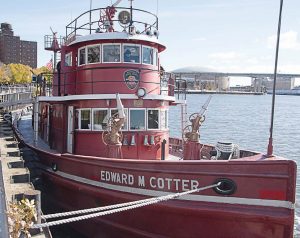 The Edward M. Cotter fireboat spends the majority of its time docked at its firehouse in Buffalo, N.Y. Captain John D. Sixt III and Jack Kelleher, the marine engineer, are the ones who care for the boat full time. (Photo provided by the Edward M. Cotter Conservancy)

Although currently named the Edward M. Cotter, the fireboat was christened in September 1900 as the William S. Grattan in honor of the first paid fire commissioner of Buffalo, N.Y. Construction of the vessel began in March 1900 in New Jersey as Buffalo’s third fireboat. The Grattan was built twice as big as the other boats with twice the horsepower so that it could work as the city’s ice breaker. The boat is 118 feet long, 24 feet wide and cost the city $91,000.

The Grattan switched from steam power to oil boilers when it had to be rebuilt after catching fire in 1928. While assisting at the Cahill oil barge fire, the Grattan caught fire and was burned to the hull after contact with the barge, causing the boilers to quit and the fireboat to become trapped on a sand barge. The Gratton sat for 18 months while the city decided to replace the fireboat completely for $225,000 or rebuild it for $99,000.

Ultimately, they chose to rebuild the boat with some modifications. According to Sixt, “The rebuild took the pilot house from the main deck to the upper deck for a better vantage point for firefighting, which is also why the tower ladder was added at the stern of the vessel.” Two foam tanks were also added, which could each hold 230 gallons of foam.

In the 1950s, the oil boilers were beginning to wear down, and so the Grattan was sent to Wisconsin for its second rebuild. This time they chose to use diesel fuel instead of oil boilers. This rebuild added two pumping and propulsion caterpillars and two pumping caterpillars to increase the fireboat’s pumping capacity as well as two generators. The fireboat’s pumping capacity was increased to 15,000 gallons per minute overall. 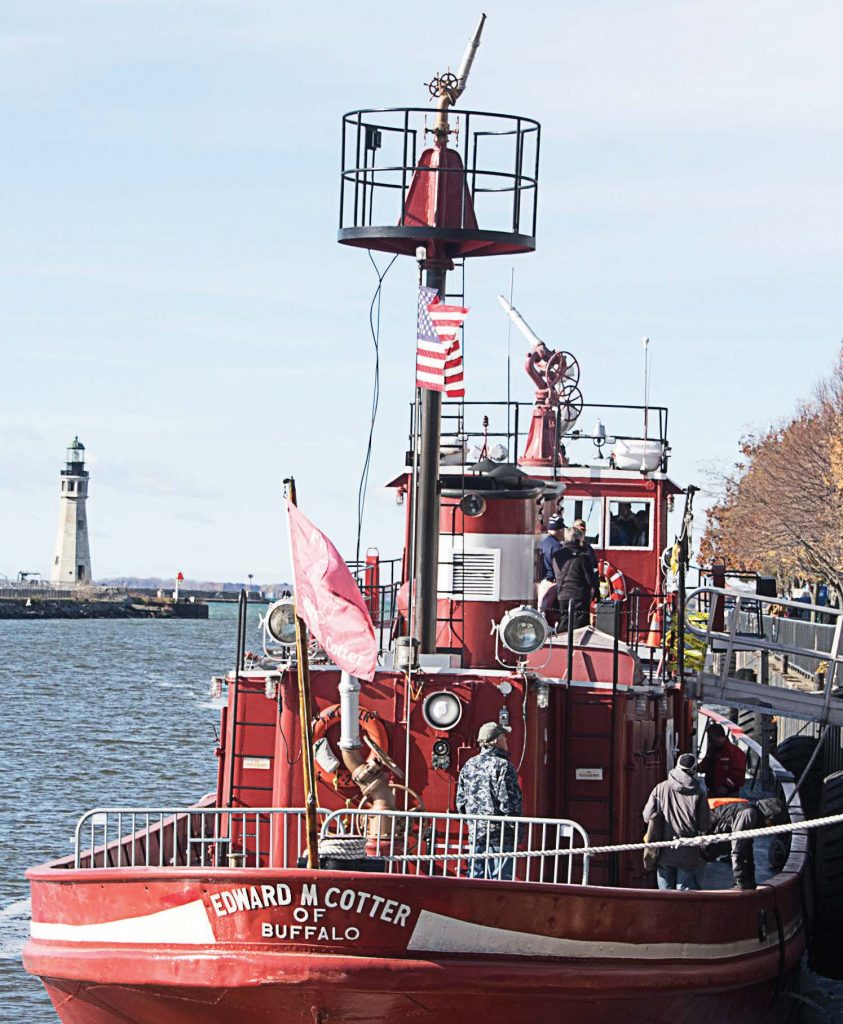 The fireboat was built to act as an icebreaker during the winter as well as fighting fires whenever called upon. As an icebreaker, Sixt teams up with the public works department. He stated they need to “wait for the thaw after the freeze. Since three tributaries run into the Buffalo River, the ice breaking helps to flush them out when the creeks start to run.”

In order for the Cotter to get called in to assist with a fire, it has to be rather large, such as a major grain elevator fire, a large vessel fire or an apartment building fire, since it can pump out as much water as seven land pumpers. Currently, the fireboat uses water from the river and lake to put out fires.

In 1960, the Cotter traveled to Canada and became the first boat to cross international waters to assist in fighting a fire when Port Colborne’s Maple Leaf Mill caught fire. In 1972 the fireboat was called in when the Pillsbury flour mill exploded. Its most recent call was in 2013 when it was called in to assist with the Concrete Central grain elevator fire. Sixt mentioned the Cotter “has assisted with a few small fires since then but nothing of spectacular or catastrophic proportions.” However, it can also act as an assist for the city by using supply lines to hook up the trucks to the boat and feed the land pumpers. Since its last rebuild, the main concerns are simply routine maintenance. Since much of the equipment is still from the 1950s, it is beginning to need replaced, and replacement parts can be difficult to find. Sixt works with marine engineer Jack Kelleher to not only maintain the equipment on the fireboat, but also perform preventative maintenance so that any problems can be avoided. Patching leaks and painting every year is also a necessity after a winter of ice breaking. However, everything on the fireboat is still fully functional. Sixt maintained that the Cotter is “just as vital today with the current waterfront development of apartments and restaurants.”

The Cotter also works in a public relations and charity role during the summer as a part of ceremonies. Each year the Cotter also ventures back to Canada as part of the annual Colborne Canal Days as a thanks for its help in 1960. In 1996 the Cotter was deemed a national historic landmark. Recently, the Edward M. Cotter Conservancy was established to help raise money for the upkeep of the fireboat.

Unless called out on duty, the Edward M. Cotter remains docked at its firehouse. At 116 years old, this fireboat will remain on active duty for the foreseeable future.