Christmas in Bethlehem, Pa., wouldn’t be the same without the efforts of the city’s electrical bureau, which is comprised of three electricians. Electrical Bureau Chief Greg Cryder said each year the bureau runs three bucket trucks every day with three helpers/drivers who assist the electricians, regardless of weather condition, to complete its decorating task on time.

“For the actual Christmas turn on, our entire shop starts working to prepare for the turn on at 10:00 a.m., and we wrap up about 7:30 p.m., which gives the illusion that the one switch turns on the entire city,” said Cryder. “We start decorating the last week of September and must be completed by Thanksgiving for turn on the day after. We start tear down the second or third week of January and finish up in the middle of March.”

To get a feel for the scope of the bureau’s efforts, just check out these stats:

The electrical bureau installs just over 500 5-foot Christmas trees on traffic signal poles and light poles on the three bridges. Of these trees, 40 percent are artificial with LED C7 lights; the others are cut live trees with LED C7 lamps. White lights are used on the north side while multicolored lights are placed on the south side of the river. The city hopes to go completely artificial within three years, budgets permitting. Signal poles usually require three trees per pole for the desired look. Light poles on the bridges usually require two trees.
Six sets of large advent candles are installed, each with a 10-foot diameter; they are 12 feet tall with neon flames that illuminate with the advent calendar.

Forty-eight 5-foot-tall LED illuminated stars are installed on the south side at non-signalized intersections.

The electrical bureau installs 12 10-foot cut live Christmas trees in front of city hall and the library on the light poles.

The bureau also hunts down two very large trees, which usually takes about 40 to 60 man hours to find suitable donation trees, if they are even available. Cryder noted, “It is getting very difficult to find trees that have a single trunk and look good on all four sides that residents of Bethlehem and surrounding cities are willing to donate and do not have power lines or bald spots in them and that we can get back to city hall.”

Once suitable trees are found, the electrical bureau cuts them down using a crane and 55-foot lowboy trailer; then it transports two 45-foot-tall, 30-foot-wide trees by truck and with police escorts, sometimes with other police departments besides the Bethlehem Police Department involved because the trees are located in different townships. Three bucket trucks then lift wires the entire route to City Hall and the Second Avenue ramp. These trees are finally decorated with 300 stringers of C9 incandescent lamps.

When attaching the trees to the poles, the bureau uses 1,500 feet of one-half inch stainless steel banding. Cryder stated, “We replace every burned out lamp at the end of the season when we put them away. We use about 4,000 C7 LED lamps and 1,500 C9 incandescent lamps.”

The bureau also cuts down and installs a 20-foot mayor’s tree at City Hall and decorate it with red, white and blue lights only. The local school children then place handmade cards on the tree.

The lighting of the tree ceremony is on Black Friday, and three selected kids turn on the switch while Channel 69 news broadcasts live. 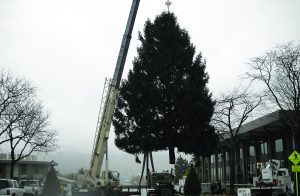 Bethlehem’s electrical bureau starts decorating during the last week in September, completing a long list that include putting up lights, Christmas trees and more. The bureau wraps up its decorating by Thanksgiving, in time for the lighting ceremony that occurs on Black Friday. (Photo provided)

Bethlehem also turns on background Christmas music on Main Street for the season.