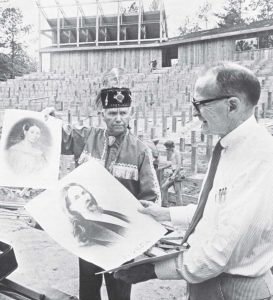 Kermit Hunter, right, author of “The McIntosh Trail,” looks at artist renditions of William and Susanna McIntosh with Chief W.E. “Dode” McIntosh, their great-great-grandson. In the background, workers finish up construction of the Peachtree City Amphitheater, which hosted Hunter’s play as its inaugural production. (Photo by Glen Allen)

As a planned community charted March 9, 1959, Peachtree City, Ga., is a relative newcomer to the nation’s family of municipalities.

But the city of 35,000 carries ubiquitous earmarks harkening to the person and heritage of William McIntosh Jr. (1775-1825), who purportedly settled the area by treaty with the federal government.

McIntosh, also known as White Warrior, was born to a Scottish father and Creek Indian mother. He became chief of a coalition of Creek tribes and worked for peace between the Native Americans and white settlers.

A successful businessman and politician, McIntosh owned two plantations and operated a ferryboat company. He helped the Creek National Council centralize tribal governance and assisted in formulating the Code of 1818, which codified Creek laws and established a police force known as the Law Defenders.

In 1824 the council, including McIntosh, passed legislation making the alienation of communal land a capital crime.

McIntosh violated that statute by negotiating the transfer of Creek land to the federal government in 1825. Sentenced to death, he was soon afterward executed on his plantation by a sizable band of “law menders.”

Though the Creeks never forgave McIntosh, posterity apparently has.

A bronze tablet placed on McIntosh’s grave cites his “heroic devotion,” “un-selfish friendship” and “valiant service” and noted he “sacrificed his life for his patriotism.”

In the 1950s a group of real estate developers accumulated more than 12,000 acres to build a planned community, divided into villages, each with its own shopping areas, recreational facilities and elementary schools.

Although scaled back from its original anticipated dimensions, Peachtree City was the first successful preplanned city in the southwestern United States.

Two years before the charter, nearby Flat Creek was dammed to form Lake Peachtree, a sprawling 240-acre recreational attraction in the heart of the city.

That year the volunteer fire department, police department — then consisting of one squad car — and elementary school were established.

The National Weather Service relocated its central office from Atlanta to Peachtree City in 1994.

The McIntosh influence remains evident throughout the city. The city’s five villages — Aberdeen, Glenloch, Braelinn, Kedron and Wilksmoor — are named in honor of his Scottish heritage, and the inaugural theatrical production upon the opening of the Peachtree City Amphitheater in 1976 was the biographical sketch, “The McIntosh Trail.”

The city was hailed “one of America’s best suburbs” in 1975 by the Ladies’ Home Journal and was designated a “Tree City USA” by the Arbor Day Foundation in 2001.