Grandview, Mo., is a first-tier suburb of Kansas City, Mo., with a population of 25,290. Grandview is also an environmental justice community; with all its census tracts designated EJ either by income or demographics. I-49, part of the NAFTA Trade Corridor, runs north/south bisecting the city into eastern and western halves. Creating I-49 and the resulting geography are important because they have shaped our city and caused some significant negative impacts. Moreover, the negative effects from having a major highway dividing a community are not unique to Grandview.

Earlier this year, Transportation Secretary Anthony Foxx spoke at the Center for American Progress on “Bridging the Divide: Connecting People to Opportunity.” Secretary Foxx discussed the damage to communities resulting from highway construction over the past century. He spoke of his concern — and the need — for reconnecting people and communities. While Secretary Foxx mentioned several large cities and communities, smaller communities have also suffered, often disproportionately, and this is the case for Grandview.

Similarly, in 2015, Emily Badger wrote in the Washington Post about how railroads, highways and other artificial lines racially divide America’s cities. Her article argued that even before people planned the roads Secretary Fox discussed, railroads set the stage for disrupting communities by later highway construction. One effect of the rail and highway construction through Grandview was that much of the city ended up on the “wrong side of the track.”

As Badger points out, being on the wrong side of the tracks has long-term, continuing effects. For Grandview, the long-term disruption of our community fabric brought about by “transportation improvements” that have benefited the “greater” regional, Midwestern and national “good,” but has resulted in serious social, health and economic consequences for Grandview and all its citizens that needed addressing.

While upgrading I-49 holds great promise for metro Kansas City’s economic development, it has also heightened long-term challenges for the city of Grandview related to community cohesion, economic development and livability. The major action of designating I-49 signaled that Grandview’s citizens were destined to continue to “suffer” disproportionate negative effects for the “transportation” benefit of others.

Grandview also suffered the problems many first-ring suburbs have experienced, expanding second and third ring communities into greenfield areas. For first-ring communities, this is the mother of all unsustainable activities.

Yet despite, both the long-term history and recent transportation actions that have harmed the people of the Grandview community; denied them good health; handicapped their ability and their liberty to move freely within their own community; and forced them to use what scarce funds they have to pay for excessively high health and travel costs rather than to engage in the pursuit of happiness, the Grandview community did not give up hope that it could correct the injustices that have been imposed on it. Since 2008 the city of Grandview has made great strides towards making Grandview not only a place again, but a place made of many places.

Key to this recovery has been following the basic precepts of environmental justice; that is involving our citizens in the projects affecting their community. In addition, the process we have followed has involved several planning and development approaches; each in itself provides positive benefits to a community, but when done with each other, compound their benefits. These include developing “complete streets,” providing for “walkability,” developing sustainable and green infrastructure, and “making places” around our city. These approaches incorporate a key component of the environmental justice mantra … considering people first and seeking to shape projects by considering the ideas and thoughts from the people most closely affected.

For developing infrastructure projects, in particular, this holistic approach has not meant a lowering of engineering standards — as some have worried would be the case — but rather, has allowed the city to demand better, higher quality work from builders because the work being done is clearly creative and innovative to the point where builders want to be involved. This approach has also not necessarily meant an increase in life-cycle costs. Because principals of good engineering are followed, builder’s better understand what is going on, and there is increased completion by builders.

By bringing together many of the ideas that currently populate the infrastructure business, the city has developed an approach to infrastructure development that has had many benefits for the city, especially for its social and environmental fabric. Now, for the first time in over 30-years, the city is experiencing rejuvenation and a reinvigoration that reflects improved livability and its recognition as a good place to raise a family and run a business.

In the end Grandview has seen improvement and its reinvention because it has adopted new thoughts and ideas, such as complete streets, sustainability, place making and walkability, with the understanding that while on one hand these ideas address particular problems, in the broadest sense these ideas all seek to preserve — and make better — the world and its environment so humankind can continue long into the future.

In developing such a holistic approach to infrastructure development and how it has addressed problems inherent in an environmental justice community, Grandview has been able to overcome the challenges of 35 years of inertia. As a result, we have seen our main street produce increasing sales taxes and add new businesses. Two of our three 1950s era shopping centers have redeveloped, and the city is recognized as being on the move again. This has all happened because as a community: 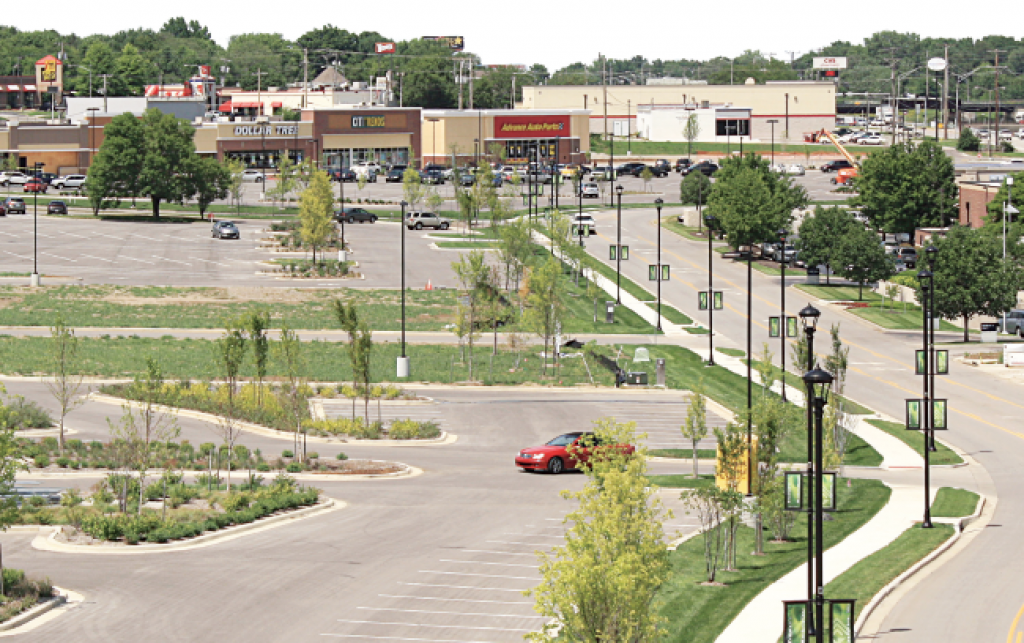 Grandview, Mo., has reinvented itself by adopting new thoughts and ideas, including complete streets, sustainability, place making and walkability. The city of 25,290 is also an environmental justice community. (Photo provided)

Above all, we have been positive about our future and have been careful not to mortgage it away. Most importantly, we have told our story to whoever we can, because we are proud with how our work has succeeded in making Grandview a vibrant place again, and we encourage other communities to take such a holistic approach to community improvement.

Dennis Randolph is in his 46th year as a local government engineer. Currently director of public works for the city of Grandview, he is also an adjunct instructor in construction engineering at the University of Missouri — Kansas City. In 2015 he was selected as one of the American Public Works Association’s Top 10 Public Works Officials. He currently takes part on a number of technical committees and is a member of Environmental Protection Agency’s National Environmental Justice Advisory Council.