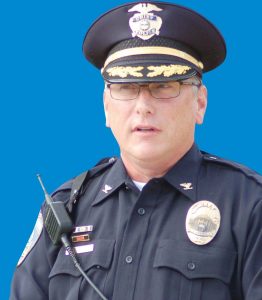 Chief Paul Hartinger of the Blue Ash, Ohio, Police Department speaks at a safety press conference. One of his goals since becoming chief has been to improve relationships between the department and the community. (Photo provided)

Chief Paul Hartinger wanted to give community members and Blue Ash officers a chance to have positive interactions, so after becoming chief, he helped launch the Citizen’s Police Academy and start an annual open house for the department. Both events are now marking their third year.

“It’s been very successful,” Hartinger said of the Citizen’s Police Academy. “When I made police chief, it was something I wanted to do and at the time a captain was looking for something to do.” That captain organized both the first and second year for the academy; this year, however, Hartinger stated it will be delegated to a supervisor.

Different officers teach different segments of the academy, giving citizens a chance to see different facets of the department. Through the citizen’s academy and the annual open house, which is held in September each year, Hartinger noted they have gained some ardent supporters in the community and local government.

“We do a lot of stuff,” Hartinger said, noting the department tries to have a presence at as many community events, such as the Blue Ash Bike Rodeo, as possible.

“Although our efforts started long before the events in Ferguson, Mo., which created a national mantra for improving community-police relations, we redoubled our efforts after these events and our entire department focused much time and energy on maintaining an already great relationship by making great strides to find ways to build and improve all relationships no matter the size or scope,” Hartinger said. “We are leaders recognized by the state of Ohio’s Collaborative Advisory.”