Taking it to the streets

The people living near Charleston, S.C., rely heavily on Folly Road. It connects the islands to the mainland, it’s the route to the beach and it’s a destination for shopping and other businesses. So why do they despise it so much? 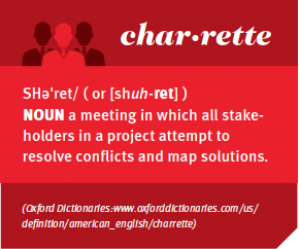 A poll of local residents revealed 62 percent of those who use Folly “hate” it. Only 8 percent had anything good to say about it. Most people described the road as “congested,” “crowded” and “dangerous.”

But Folly Road is about to change for the better. “Rethink Folly Road: A Complete Streets Study” is a public design and planning project that re-envisions it as improving the experience of pedestrians, cyclists, public transit riders and motorists.

Among the ideas generated by residents to improve utilization of Folly Road were: making it more convenient to reach the beach, upgrading transit, adding covered shelters and creating new connections between adjacent properties and the road. (Image provided)

“It looks at how to make the road function more efficiently, and at the same time accommodate … motor vehicles and transit, bikes and pedestrians in a safe manner and improve the mobility of the corridor for people using it — then also make it more accessible from the neighborhoods behind the corridor,” said Basha. “We heard that there were people who live in the surrounding neighborhoods who would like to be able to ride their bike up to the corridor rather than get in their car.”

The study is being conducted by the BCDCOG, one of South Carolina’s 10 regional planning councils. It seeks to provide local governments with planning and technical support to help them improve the quality of life in their region.

The portion of the road slated for improvement is nearly 8 miles long and stretches from Folly Beach in the south to the Wappoo Cut Bridge on James Island to the north. Almost 19,000 people live in the corridor. About 44,000 vehicles cross the Wappoo Cut Bridge every day, and approximately 9,300 cross the causeway to Folly Beach. This stretch of road runs through four jurisdictions: the city of Charleston, the town of James Island, the city of Folly Beach and unincorporated portions of Charleston County. Each of the four jurisdictions has pledged to collaborate in and support the design process.

Other stakeholders include the South Carolina Department of Transportation, which maintains the right-of-way; the Charleston Area Regional Transit Authority, which operates public transit on the road; and, perhaps most importantly, the people who use Folly Road daily.

The study has relied heavily on public input since it was introduced April 23, 2015, at a community kickoff meeting. Approximately 120 community members attended.

That May the public was invited to a week-long public design charrette — a meeting in which stakeholders collaborate to resolve conflicts and generate design solutions. Groups of citizens brainstormed and met with members of the planning team in open studios. While public kickoff meetings and workshops are common, Basha said, “Having that charrette a whole weeklong, where people could drop in, that’s a little bit unusual.”

She described the sessions as very “hands-on.”

The project also gathered public feedback through written surveys and keypad polling. A website was launched at follyroad.mindmixer.com to facilitate online participation.

“One of the great things about technology
is now we can do the online participation
forums,” Basha said. “We can set up a website
for a project and put it out there, and you can
do online polling so residents who couldn’t
make it to the public meetings can go in and
give feedback on the different ideas that are
coming out of the meetings. I think that helps
generate more interest in being part of the
upfront planning and visioning process.”

Basha also attributes the high level of public participation to the creative nature of the Rethink Folly Road project. “Because it was more design-oriented, I think for the general public that’s a little bit more exciting than looking at policies.”

Several ideas that surfaced during the charrettes gathered strong support among participants.

“One of the suggestions was about doing a ‘Folly Trolley,’ where you could do a park-and-ride to the beach and have a shuttle to help with the congestion getting back and forth to the beach,” said Basha. “That’s thinking a little bit out of the box, but it’s feasible if you can figure how how to do it funding-wise and coordinate it.” Ninety-one percent of study participants expressed support for the Folly Trolley.

After the charrette, the project steering committee refined the concepts. A community open house was held in August 2015 to gather more public feedback on the draft ideas and summary report. Five “guideposts” emerged from the design charrette to articulate an ideal future for Folly Road: that improvements should make the road safer, connected, green, valuable and synced. The changes will be implemented in stages beginning as early as fall.

Including the public in the design and planning phases of such a large project can encourage fresh ideas and increase public support for infrastructure projects. Basha views it as an integral component of urban planning.

“Planning is basically a public process, in my opinion,” said Basha. “When you are actually developing a plan, the public process is the thing that makes it successful or not.”