One of the best ways to encourage others to do what you want them to do is to lead by example. When it comes to being more energy efficient in a community, starting at the top — city government — is more likely to create an attitude of environmental consciousness in your city or town.

There are several programs in place already to help municipalities develop energy-efficient programs and incentives, and more are likely to come in the near future. Most of the programs are in agreement about two things: that energy efficiency is the fastest, most-effective way to conserve energy, save money and even create jobs and that focusing on efficient buildings should be the number one priority for municipalities.

A group of employees from Intertape Polymer in Danville, Ga., gathered outside their plant after a successful Energy Star Energy Treasure Hunt in 2014. The company was recently named an Energy Star Partner of the Year for sustained excellence, discovering over $490,000 in energy savings and promoting the program in the community to other organizations. (Photo provided)

These California homeowners are testing out their new energy-efficient thermostat, provided through the HERO program and Renovate America. (Photo provided)

Energy Star is a voluntary program developed by the Environmental Protection Agency that helps businesses and individuals save energy and money. Energy Star provides energy efficiency ratings and certifications on products like light fixtures and appliances.

According to its website, www.energystar.gov, “state and local governments across the country are taking bold steps to protect the environment and cutting energy costs by adopting policies that leverage Energy Star.”

In leading by example, the ordinance also has policies for city employees to turn off lights, power down computers and consolidate meetings, for example.

Atlanta, Ga.; Chicago, Ill.; Kansas City, Mo.; Minneapolis, Minn.; New York, N.Y.; Philadelphia, Pa.; and Westchester, Pa., have all enacted similar ordinances. The names of the ordinances, square footage requirements and other specifics may differ slightly, but most policies give the largest buildings in their cities a year to comply from the time the ordinance is enacted and two to three years for full compliance.

Energy Star has tools available to help measure, benchmark and track energy use, water consumption, waste generation and greenhouse gas emissions of all buildings. This can be done securely online by using the Portfolio Manager. Benefits of the Portfolio Manager are one can use the results to identify under-performing buildings, set investment priorities, verify general efficiency improvements and receive EPA recognition for superior energy performance.

There’s a quick start guide to lead one through the steps. Log onto www.energystar.gov/portfoliomanager to add a property and answer questions about the property, including details such as operating hours, number of employees, etc. Information is then added about water and energy consumption, waste materials generated and more. One can view results and progress with graphs and charts generated from the data given. The templates and reports section has several options, including energy performance and the ability to create a spreadsheet.

There’s also an Energy Star Treasure Hunt Guide to help find energy savings at an organization, whether it be city properties, nonprofit organizations or commercial businesses. The Energy Star Treasure Hunt is an event that takes place over two to three days and engages employees in identifying low-cost energy savings opportunities from behavioral, operation and maintenance actions.

The 31-page guidebook provides step-by-step guidance to help you organize and execute an energy treasure hunt. Individual examples from Energy Star partners are included, and organizational checklists are provided to illustrate practices and help implement the treasure hunt. The guide complements the EPA’s Energy Star Guide for Energy Management. The idea behind the treasure hunt is to tap into employee knowledge; after all, who knows the equipment better than those who operate it on a day-to-day basis?

According to the guide, the focus of the treasure hunt is on low-cost efficiency service — finding opportunities for energy efficiency improvements and energy savings typically found in these four areas:

Operational: such as eliminating unnecessary use of existing equipment

Procurement: such as renegotiation of utility supply contracts Energy Treasure Hunts focus on operational savings; many of which will be low cost or no cost and energy efficiency empowerment.

“Energy Treasure Hunts sets a unique tone — more proactive and positive — by focusing on positive outcome and empowering day-to-day operations of existing equipment, versus energy audits and assessments, which employees often see as evaluations intended to pinpoint problems and poor performance,” according to the guide.

Any size organization can carry out a treasure hunt and it has lasting benefits beyond the event, including:
Optimization: improving the operation and efficiency of existing equipment before replacing, which, aside from saving costs, helps employees to consistently think of the most efficient practices
Teamwork: engaging employees and helping educate to identify opportunities to reduce energy use
Ownership: involving employees creates a sense of responsibility for solutions
Repetition: conducting a treasure hunt two or more times a year.

The Treasure Hunt is in four phases focused on results:

Preparation: Schedule discussions with your organization or facility leadership and gain support. Gather current data on current energy use, equipment specifications and operating parameters. Begin this phase about four to six weeks prior to the planned event.

Pre-training: Meet with facility team leaders to compare roles and responsibilities and the treasure hunt agenda. Do this phase at least one week before.

Follow Up: Develop a schedule for pursuing energy reduction opportunities identified during the hunt. This should be completed one to two weeks after the onsite event.

The energy hunt should examine both operation and non-operational periods. Sunday through Tuesday works well for most organizations.

One organization that has been used as a case study and who has tested some of the Energy Star programs is Intertape Polymer Group in Danville, Va. Philip Kauneckas, corporate energy manager, said they’ve facilitated about eight treasure hunts in their Danville facility and are about to conduct the ninth. They’ve also conducted the energy treasure hunts in other Intertape Polymer Group facilities. He said they were asked to host an event back in 2013 to test out the treasure hunt guide and its content. Kauneckas said a group from the Association of Energy Engineers came to Danville to learn how to do the treasure hunt.

“So I feel like we’ve taken the lead with this,” he said. They were also just named one of the Energy Star Partners of the Year in May for sustained excellence for both the Sarasota, Fla., and Danville plants for identifying over $490,000 in cost savings and for creating an Energy Star network in Danville by promoting and facilitating the treasure hunts for other organizations.

To jump-start things in your community, consider sponsoring a city-wide competition for organizations, including city government, to hold an Energy Star Treasure Hunt. This might be an annual event around Earth Day, for example, with incentives and prize drawings for participating organizations and businesses. Such a competition could be the catalyst for a more energy-conscious city on all levels. 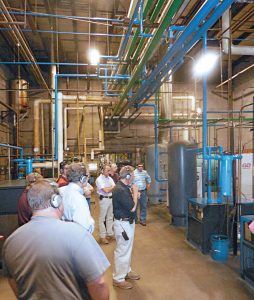 A group of employees from Intertape Polymer in Danville, Ga., conducted an Energy Star Energy Treasure Hunt last spring. The company conducts two energy treasure hunts a year at this facility after being part of the pilot program to test out the treasure hunt guide in 2013. (Photo provided)

Other energy saving programs are quickly growing across the nation. One pilot program, City Energy Project is a national initiative to create healthier and more prosperous American cities by improving efficiency of buildings. CEP is a joint initiative of the Natural Resource Defense Council and the Institute for Market Transformation and is funded by several philanthropic groups, including Bloomberg Philanthropies, Doris Duke Charitable Foundation and the Kresge Foundation.

According to CEP officials, “Cities are leading the way to a more sustainable environment — they’re not waiting for state or federal governments to do something.”

The focus is on more efficient buildings as they are the biggest consumer of energy in a city or town and are often the biggest carbon polluters, more than transportation in many cases. CEP is partnering with these cities for a three to four year period.

According to CEP, making buildings more energy efficient creates jobs at all skill levels, frees up money currently being spent on utility bills to enter the local economy. CEP partners also spark innovation. Innovators want to live and work in the best cities in the country.

Those innovators and others are purposefully looking to relocate to communities with “green” policies in place — shouldn’t your city or town be one of them?