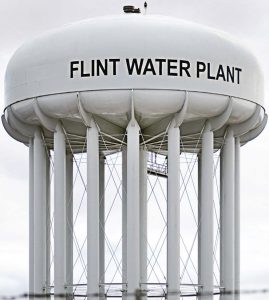 The water crisis in Flint, Mich., may prove to be one of the most high-profile infrastructure stories of the decade, even though nothing exploded, nothing flooded, no one was killed and no one had to dig out from under six feet of snow. When the story first broke, there wasn’t enough lead time for media outlets to hype the situation, or for political candidates to package it; yet the entire country still recognized the failure as an example of the stealthy manner in which our nation’s failing infrastructure is bringing about significant disruption.

Thanks to the ASCE report card and our own daily challenges, we knew that at every level U.S. infrastructure has begun to demand attention. Faced with aged solutions that are failing, most municipalities have little choice but to throw money at patchwork and temporary ones while the time-consuming process of funding a long-term solution hobbles along. That’s precisely what Flint was doing when the patch failed.

According to 24/7wallst.com, Flint has been paying the highest water rate in the nation for decades. As early as 1963, the city took interest in investigating ways to reduce the financial burden this laid on its residents and businesses. A plan to use an alternate source derailed, but when the 30-year contract with the Detroit Water and Sewerage Department expired in 2010, local officials revisited the idea.

By that time a significant financial crisis loomed in both cities, and Flint was right to prioritize a solution to its water problem. That year it joined a forerunner of the Karegnondi Water Authority, a county-level initiative to supply water from Lake Huron to the area via pipeline.

The Municipal’s Sarah Wright reported in July about the three-quarters completed pipeline. Running from Lake Huron into Genesee and Sanilac counties, it will supply up to 85 million gallons of raw water per day to authority members, including Flint. Several individual communities have already developed the necessary plans and facilities to treat Huron water.

One thing that didn’t seem relevant at the time of Th e Municipal’s first story was the extreme reaction manifested by Detroit to Flint’s plan to abandon it. In March 2013, Detroit Water & Sewer launched a public attack against Flint for planning its departure, and in April gave the required one-year notice that it would terminate the city as a customer. With two years between the end of the relationship and the projected completion of the Huron pipeline, the city’s only option — or more correctly, that of its state-appointed emergency manager — was to either temporarily use the Flint River as its main water source or sign a stopgap agreement with DWSD at an even higher rate than before.

Another detail that shouldn’t have been beyond scrutiny was the fact that the Flint Water Treatment Plant was unprepared to treat the high levels of pollution and sediment present in the Flint River. It would seem the powers-that-be at the state level failed to consider this fact either.

Lastly, it’s still unclear whether anti-corrosion chemicals, had they been added at the last minute, could have prevented or minimized leeching of the city’s century-old pipes triggered by Flint River’s contaminants.

Starting in July and going into August, Wright will try to determine the extent to which a much-wounded Flint must now repair its water delivery network, water treatment plant and hijacked budget. The Karegnondi pipeline is on schedule to open this month, but tremendous damage has already been done to the city’s infrastructure and to something even more difficult to repair: the faith of local residents in their city and state government.

Flint deserves credit for assessing its dramatic financial situation, identifying high water rates as one of the culprits and addressing the problem. But the success of its efforts were hampered by the extenuating circumstances of bankruptcy, and as a result, a situation ensued that handcuff ed local officials’ efforts. I

t’s a shame things played out this way. It’s even more regrettable that thousands of residents, city officials and the Flint business community are paying the price.

Many cities currently possess the potential for a Flint-style crisis. I wonder if perhaps the lesson we should learn from the situation is one of assigning the highest priority to putting our financial house in order before someone is forced to do so for us: someone who may not have the time or interest in gathering all the information needed to wade through complex situations to find solutions that address each community’s unique challenges — and that are in our best interest.