Dubuque Green Alley Project mitigates flooding, improves water quality  Between 1999 and 2011, six presidential disaster declarations were issued for Dubuque County, Iowa, due to increased episodes of flash flooding in the area. With damage estimates nearing $70 million over the past decade, leaders in the city of Dubuque decided it was time to stand up to Mother Nature.

The structure of Dubuque’s stormwater-permeable pavement is shown below. (Illustration by Richard Aguirre & Shutterstock, data provided)

The Bee Branch Watershed Flood Mitigation Project is a $200 million, multi-faceted initiative designed to combat frequent and severe flooding that occurs throughout a 6.5-square-mile area inside the city limits. Fifty percent of Dubuque’s citizens live or work within this perimeter.

According to Kristin Hill, communications specialist for the project, Bee Branch Watershed is an area characterized by steep slopes and bluffs. Both shed water quickly, allowing it to collect in the flatlands adjacent to the Mississippi River — where it has nowhere to drain. The mitigation project consists of several infrastructure improvements that will reduce the volume of stormwater, slow the rate at which it flows through the upper watershed, increase the safe convergence of stormwater through the flood-prone areas and provide floodwater protection to the city’s water treatment plant.

“The project will protect nearly 1,400 homes and businesses… and prevent an estimated $582 million in damages over its 100-year design life,” she said.

Improvements include upstream detention basins, storm sewer capacity increases and opening approximately 1 mile of Bee Branch Creek. One of the most exciting aspects is the conversion of 240 of Dubuque’s back streets into green alleys, in what is known as the Green Alley Project.

What is a green alley?

As with green streets, green alleys utilize permeable pavement to enable stormwater to filter through the surface and drain into the ground rather than collect on the street level or drain into the sewer system.

Although green alleys are a valuable tool for creating inviting public spaces, in this case, the alleys were converted primarily as a flood control measure.

A number of materials qualify as “permeable,” including asphalt and concrete: but Dubuque opted for interlocking pacers, which are both attractive and easy to manage.

“If you think about it, many alleys were paved with brick because they are easy to clean, pull up when they needed to be reset and put back down,” said Jon Dienst, civil engineer II for the city. “They will also reduce the amount of stormwater that ends up polluting the sewer system and the river because the pavers will grab the water farther up the watershed, clean it, sift out the minerals and put a better quality of water back into the ground.”

Dienst said 23 alleys were completed in 2014, with another 28 finished last year. Thirty more are slated for conversion this year, and the rest will be completed between 2024 and 2038.

The entire Green Alley Project is expected to cost $57.4 million and is being funded through the Clean Water State Revolving Fund and the Iowa Environmental Commission, which helped the community restructure a loan in order to help it save $9.4 million in interest.

There is a special assessment charged to property owners who live along the alleys. A state sales tax increment makes up the rest of the financing strategy, which will be spread out over 20 years. 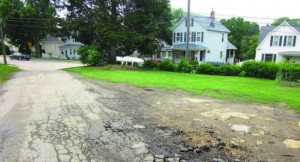 Dubuque, Iowa, located in the Bee Branch Watershed, is a floodprone area. Converting the city’s alleys to green surfaces reduced the volume of stormwater and increased the safe convergence of stormwater through the area. In this case, it also provided protection to the city’s water treatment plant. (Photo provided)

Dubuque, Iowa, located in the Bee Branch Watershed, is a floodprone area. Converting the city’s alleys to green surfaces reduced the volume of stormwater and increased the safe convergence of stormwater through the area. In this case, it also provided protection to the city’s water treatment plant. (Photo provided)

The firm contracted to design eight of the new Green Alleys was Fehr Graham. Ryan Wicks, branch manager for the company’s office in Manchester, Iowa, was the lead on the project.

With every project there are challenges to consider, and the Dubuque Green Alley project was no exception. Wicks said engineers had to take into consideration the clay-laden soil, as well as grading issues, when converting the pathways into green alleys. Because water tends to collect and remain in void spaces, his team created some storage chambers and tile connections in the storm sewers that would help the water move more effectively.

“The conventional or prior standard for reducing runoff was to store the water and then release it slowly; but with these pervious pavers and a few other adjustments, we can allow the water to return to the ground more naturally without a lot of extra contaminants,” he said. “These pavers essentially help facilitate what a water treatment system does, but in a natural way.”

Although they are not a trend yet, cities that are prone to flooding have begun looking into and installing green alleys as a way to manage the water flow. Communities in Ohio, Illinois, Washington, Maryland and other states have integrated them into their cityscape and are reaping the benefits.

“Communities see the advantage of them,” said Wicks. “They provide the storage that is required while improving the water quality at the same time. When municipalities seek to make improvements in this area of the infrastructure, they want to know how they can get the most in return for the investment. Green alleys are one way to do it.” 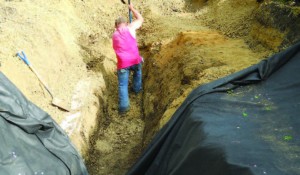 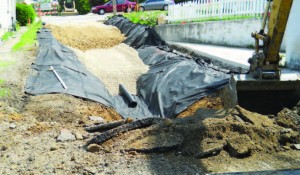 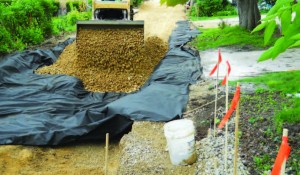 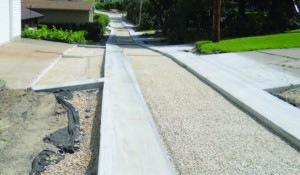 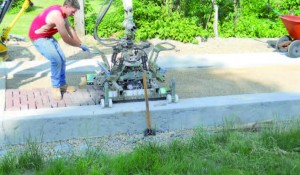 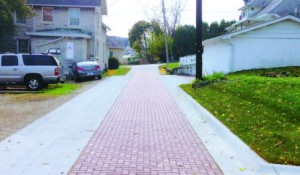