An overturned train near the tracks in Watertown, Wis. Watertown Fire Chief Greg Michalek said the cars that kept to the track remained upright, but all were leaking. (Photo provided)

According to the National Transportation Safety Board, there are on average three train derailments per day in the United States. But Lynchburg, Va., Battalion Chief Robert Lipscomb said even fire professionals don’t hear about many derailments because sometimes they do not involve hazardous materials. 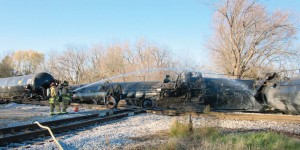 Members of the Watertown Fire Department spray down derailed cars of the Canadian-Pacific train in November. Fortunately, this particular derailment was contained before the leaking cars ignited. (Photo provided)

“I’ve learned it’s not a rare occurrence: it’s just when they’re carrying particular hazardous materials and there’s a possibility of discharging the product and contaminating water is when it makes the news,” he said.

What has significantly increased are incidents of derailments containing crude oil, due to the fracturing boom in the Bakken region of North Dakota, Montana and Canada. According the Associated Press, in 2014 railroads moved 493,126 tank cars of crude oil, compared to just 9,500 in 2008. Bakken crude is reportedly more volatile than other crude oils, and it was spills of that commodity that Lipscomb’s department and others in Watertown, Wis.; Alma, Wis.; and Mount Carbon, W.Va., have dealt with.

The entire Watertown Fire Department consists of 22 full-time firefighters and 10 more on call. On Nov. 10, they responded to a train derailment.

“The day the train derailed was a Sunday, so only five full-time firefighters were on duty,” Fire Chief Greg Michalek said.

Eleven of a 100-car Canadian-Pacific train carrying Bakken crude had tipped over. Several others also derailed, and the ones that were upright were leaking.

Michalek said the first step was to determine which cars and how many were leaking, and eliminate electrical sources so it didn’t ignite.

One of the cars had also plowed into a cement structure.

“We didn’t realize the significance of that at the time, but it wound up being a major fiber (optic) hub that ran all the way from New York to Japan,” he said. It, too, was shut down for a while because it was a possible ignition source.

Michalek’s department had an emergency plan in place. Although they trained for all eventualities, you can’t always prepare for the location of a disaster.

In this case, it happened in the best place possible. The town has a lot of overpasses, including one over a river that would have been inaccessible. They were thankful the derailment happened in a small rail yard.

Michalek felt that all in all, everything went well. The engine company was there within minutes: Firefighters applied foam to suppress the vapors and contacted the HazMat team, who plugged the leak. Thirtythree homes north of the derailment were evacuated, and the railroad put everyone up in hotels and paid for other expenses. “The railroad was very good to work with,” he said.

Six mutual aid companies assisted. One ambulance and one engine responded to other calls that came in while everyone else was on scene, and most responders were released by 9:30 p.m. Sunday night. One engine stayed on scene until 8 p.m. Monday, though, because the railroad was working and using cutting torches.

“The situation looked worse than it was. The leak was relatively small, about 500–1,000 gallons,” he said. “Our big concern was suppressing the vapors and shutting down any possible ignition sources.”

This was Watertown’s first derailment. But Michalek previously lived in a Chicago suburb and dealt with three derailments there; he felt having that experience helped in this situation.

“We were prepared for the worst case. Knowing what we were dealing with was critical, and in this case, we knew as soon as we pulled up.”

Aside from having an emergency preparedness plan in place, knowing and having contact information for people with the railroad and local businesses is helpful, he felt. The other lesson the Watertown department learned was to have a large supply of foam on hand.

It was determined later that a defective rail caused the derailment: a small crack not detected by visual inspection, or even X-ray inspection.

Brewster, like many small towns across the U.S., was founded by the railroad and has numerous trains passing through on a daily basis. On Feb. 1 of this year, eight tanker cars of a Wheeling-Lake Erie railroad train derailed in the local rail yard.

Assistant Fire Chief Jennifer Mohler said smoke was visible when first responders arrived on scene, and firefighters were met by railroad staff . “We knew it was hazardous materials, but nothing further.”

Chief Chris Colucy, an engineer with another railroad, said the way the tanker car was sitting, responders couldn’t read the placard that tells what the car contains. It was already dark when the fire broke out, which, combined with the amount of smoke, made the job more difficult.

Not taking any chances, the HazMat team was called in and evacuations began. Brewster has a population of 2,112, and 300–500 residents and several nearby businesses were evacuated.

Colucy grabbed a flashlight, binoculars and a trainmaster and set off to find out what was in the cars. They determined the tankers contained “residue,” which could be 500 gallons or 1,000 gallons of a substance.

“It could’ve been worse, but communication — having someone with paperwork sooner — would’ve been helpful,” he said.

Mohler’s department learned the importance of having an incident command system in place and practicing it. She said the derailment was of a much larger scale than what Brewster usually deals with, and responders were fielding calls from Homeland Security, the Environmental Protection Services, the NTSB and the media.

“It definitely took away that sense that it wouldn’t happen here — it was an eye-opener,” she said.

The Federal Railroad Association determined two of the eight cars that derailed contained is obutene and the other six contained natural gas. The fire was out in two hours with no injuries. The cause is still under investigation.