Most modern-day communities were founded by individuals and were named after their founder. Davidson, N.C., follows about half that tradition. 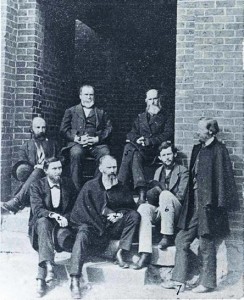 Davidson, N.C., was settled in 1837 when Davidson College — now Davidson University — located there. Pictured are a few members of Davidson’s faculty in 1873, six years before the town’s first municipal council was organized. (Photo provided)

The lakeside town of 11,750 was named after its founder, Davidson College, which was named after Brigadier General William Lee Davidson, a local Revolutionary War hero whose estate donated the land for the school.

The Presbyterian college was established in 1837. “The town grew up around it,” according to Jan Blodgett, the college’s archivist and records management coordinator. Faculty members at the college served as the town leaders. “They didn’t organize a town council until 1879,” she said.

Before the town’s incorporation, the college provided for police and fire services.

“Students and staff were part of the volunteer fire department,” said Blodgett. The tradition is still carried on in Davidson. “Our current fire chief was a volunteer as a student.”

The college also served as community ombudsman. “People would come to faculty members for issues like road repair,” said Blodgett.

For the next several decades, local cotton mills spurred the town’s growth. By 1910 Davidson had grown to 500 residents, a figure that tripled over the next 10 years.

Davidson College also grew, becoming Davidson University. The institution continued to contribute vital services to the town, providing its first water and electricity systems after the turn of the 20th century.

The campus has since moved east to accommodate the growth of the municipality. “Much of the town is now on the western side of what was university property,” Blodgett said.

Though fewer townspeople are now connected with the university and its nearly 2,000 students, Davidson is dedicated to preserving its rustic essence.