The volunteer fire company of Chincoteague, Va., has its share of cowboys; and the island village of nearly 3,000 is glad, as are visitors from around the globe who crowd the tiny resort area each July.

Riders from the fire department, and their mounts, are shuttled to Assateague Island to begin the annual Pony Penning. (Photo provided)

Members of the Volunteer Fire Company of Chincoteague, Va., herd wild ponies through the streets of Chincoteague after making them swim the Assateague Channel. (Photo provided)

Onlookers watch as wild ponies swim from Assateague Island to Chincoteague Island. The animals are headed for carnival grounds, where the foals will be auctioned off. The following day the adult horses are sent back to Assateague to replenish the herd for another year. (Photo provided)

After the release of Marguerite Henry’s beloved children’s book of 1947, “Misty of Chincoteague,” its sequels and a 1961 Disney movie, Chincoteague shot to worldwide fame. What charmed readers was the village’s wildly popular pony swim and the Saltwater Cowboys who herd the wild horses.

The book begins with an account of a centuries-old wreck of a galleon on the shores of nearby Assateague Island. The Spanish mustangs in the hold swam to safety and became feral as time passed. Fast-forward many decades and brother and sister Paul and Maureen Beebe earn money to buy Phantom, a Chincoteague mare whose foal is Misty, the titled pony. Other events follow, including a race which Phantom wins; but to the dismay of the children, she then swims back across the narrow channel to Assateague, to follow the siren song of a stallion.

In 20th century real life, several catastrophic fires in Chincoteague motivated the community to update its woefully lacking firefighting equipment. In 1925, during an annual roundup designed to thin the wild herds on Assateague Island — a 37-mile long barrier island, two-thirds of which belongs to Maryland and one-third of which lies in Virginia — the fire company held a carnival to raise the needed funds. Over 15 wild colts were sold to benefit the department, making the carnival a huge success. Bolstered by the positive response, it continued to hold the carnival annually and in 1947 started its own herd by purchasing ponies from local owners. That herd, too, was moved to Assateague, where the government allowed publicly owned herds to graze on newly established Chincoteague National Wildlife Refuge.

Each July a roundup of the horses takes place during what’s called “Pony Penning Days.” It’s done by riders affectionately termed “Saltwater Cowboys,” during a slack tide. The horsemen and horsewomen transport their own mounts across the channel from Chincoteague to Assateague, herd the wild ponies into the water and ride with them back across the low, narrow channel to Chincoteague. The foals are auctioned off and proceeds go toward the volunteer fire company to purchase firefighting gear and veterinary care for the horses.

Lieutenant John Lewis of the Chincoteague Volunteer Fire Company is the co-chair of the committee that oversees the ponies. He grew up around the fire department and ponies.

“My grandfather, father and I have all been Saltwater Cowboys, and this tradition is carried on generation after generation, which makes this group one big family,” said Lewis, a member of the department since 2004. “The Saltwater Cowboys are made up of fire company members and volunteers. They’re all skilled and experienced riders who come from all over and are always willing to help. It’s like a big homecoming to see everyone who helps out at the roundups, putting in countless hours to make sure the ponies are cared for and everything goes off without a hitch. They really give the community that small-town feel and always welcome others.”

According to Lewis, the most memorable pony penning was in 2013. A big storm rolled in seemingly from nowhere, right when the cowboys were putting the ponies in the water. 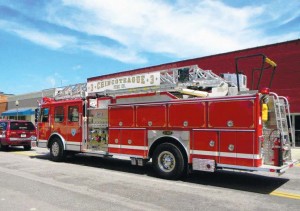 “It was raining very hard with lightning and strong winds, making it difficult to see. This was an extremely dangerous situation when you’re trying to control 150 ponies down a marsh line to the swim site. You have a huge crowd of people watching the swim standing in the marsh, on boats, in the water, and we were on our horses, which were standing in water up to their chests. The storm came up so fast no one had time to shelter.”

The squall passed after only 15 minutes, but it produced one of the coldest rains Lewis had ever felt. He considers it very fortunate that no one was hurt during that penning.

A tragedy did occur last May, however, when the most popular and legendary horse since Misty, Surfer Dude, a stunning chestnut stallion, was discovered dead in a remote clearing. His death was attributed to a very harsh winter that took its toll on the herd.