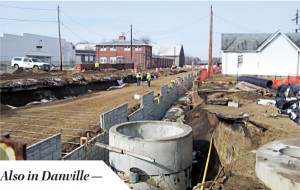 The Fairchild Overpass in Danville, Ill., is an example of how to create a successful project through cooperative partnerships. Everyone involved worked hand-in-hand to control costs and balance priorities. Total project construction cost was only 1.2 percent over project award. (Photo provided)

In 2003, when Mayor Scott Eisenhauer of Danville and his team came into office, pride was at low ebb. The number one complaint was the deplorable condition of city streets.

“The first big step in resolving that was to get the council to pass a local motor fuel tax, with the promise that every penny would go to rebuilding street infrastructure,” he said.

Once that tax passed — which was not easy — and people started seeing the improvements, the public’s trust in local government took a tremendous leap. “They understood that when we tell you we are going to do something with your money, that is exactly what is going to happen. This leans toward the excitement they have about the vision we created in changing the community,” Eisenhauer continued.

The Fairchild Overpass project was another needed project that had been talked about for 20 years, but put off repeatedly.

“Then our team came into place and started getting really aggressive and going after it, holding community hearings, gaining community input, and people became comfortable with the idea and thinking yes, we really are going to do something.”

The riverfront became another example of restoring the community’s faith in local government, Eisenhauer said. Developing the area had talked about for over 50 years: But once people saw land being bought and dilapidated structures being demolished, they became excited about being part of a long-held hope coming to fruition.

“That has also excited the business community to get involved and partner with us in these projects,” he noted. “So anytime we went out to look for funding, we had plenty of people who were willing to write a letter. Plenty of businesses were willing to step up and say ‘How do I sign on to make sure you get this grant?’”

The biggest takeaway from the Fairchild Overpass project, Eisenhauer said, was that city administrations have to put in place people with the knowledge and ability to make these types of projects a reality. That may cost more than municipalities are accustomed to paying for personnel, he admitted.

“But at the end of the day these projects only occur because you have the right people with the right knowledge who can gain the right partnerships and find the right resources to make it reality. 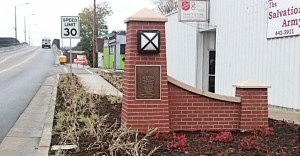 Gateway treatments at each end of the Fairchild Overpass project recognized the community’s sense of accomplishment and generated public pride and a sense of place in the redeveloped corridor. (Photo provided)

“The other thing I’ll share, a lesson well learned, is that you need to be willing and able to bring the public into the discussion from the very beginning. Because when the public feels as though they are a part of the project, they accept the project even when others might create opposition. And any time you spend $20 million, you are going to have detractors.”

Government leaders often find themselves having to defend projects. But in this case, Danville had the public defending the project for the city. It didn’t need to go out and give speeches to convince people that it was the right thing to do. Instead, it was the public that had been involved in the process, leading the charge, saying, “This is the right thing to do.” 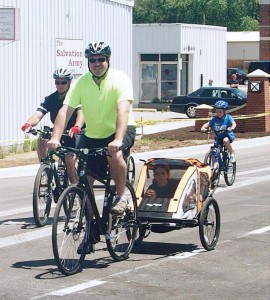 Bicyclists in Danville now enjoy the safety of a shared-use path to get from one side of a busy railway corridor to the other. (Photo provided)

“So as much as some governmental leaders tend to want to keep public involvement minimal,” Eisenhauer concluded, “I would suggest to reverse that thinking. Have the public involved from the very beginning: with you, throughout the process, so they feel ownership and so it’s not ‘the city’s project’ that is being jammed down their throats. They should be choosing what things will look like, how they will function and what the result will be at the end. This went a long way towards gaining the trust that we all benefitted from at the end of the day, and the partnerships that were needed to make the Fairchild Overpass project such an outstanding success.”