Greg Reeder, public works director for the city of Council Bluffs, Iowa, was gratified to learn he had been selected as one of the Top Ten Public Works Leaders by the American Public Works Association on the 55th anniversary of the coveted award.

“Of course, I am so very pleased with the recognition. As all public works folks know, acknowledgement for a good job seldom comes. But that’s not why we chose the profession, and it is not what drives us to excellence.

“Certainly I am grateful for all the opportunities the city has offered me, and most of all thankful to all those who helped make me look so good. Everything in my resume is a product of team effort and contribution of many.”

“I have been fortunate to work for a city that has had many challenges but had the desire to move forward to make the community a better place,” he said. “I was afforded an opportunity to be a part of that process, and it was one which I made every effort to make the most of. Besides my technical accomplishments, I focused on nurturing leadership in the organization. I have always encouraged my staff to push their limits.

A civil engineering graduate of the University of Nebraska-Omaha campus, Reeder started his engineering career at HDR, a consulting architect/engineering company in Omaha. As a structural engineer, he designed hospitals. In 1986 he became the city engineer for Council Bluffs, a city of 61,969; in 1992 he earned a master’s degree in public administration from the University of Nebraska at Omaha. He became public works director for Council Bluffs in 2005 and served as the Iowa chapter president of APWA. Three of his staff have also served as state presidents.

Reeder has been with the city for 29 years: 19 years as an engineer and 10 years as public works director. During that time, he oversaw the switches to computers, automated fuel systems and other conversions.

“Engineering had one of the first computers in the city,” he said. “We first converted our paper maps to CAD, then eventually to GIS. 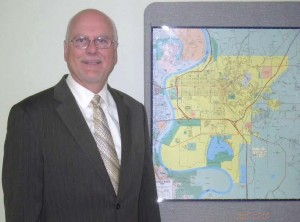 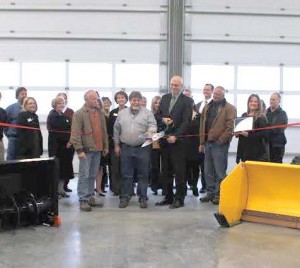 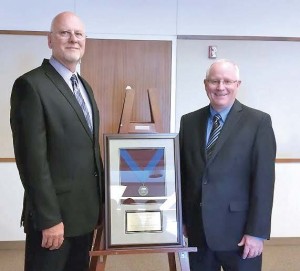 Reeder, left, and Larry Stevens, APWA president, during the APWA conference at which Reeder was named one of 2015 Top Ten Public Works Leaders. (Photo provided) 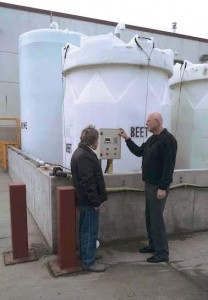 Reeder, right, speaks with an employee in front of the Council Bluffs anti-icing/deicing storage tanks. The beet tank is 6,000 gallons in size; the two brine tanks are 10,000 and 7,500 gallons; and the calcium is 6,000 gallons. (Photo provided) 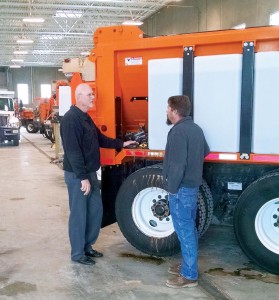 This Council Bluffs, Iowa plow truck is outfitted with solution tanks on the side. Public Works Director Greg Reeder’s hand is on the hoses that connect the tanks to the sprayer as he gives instructions to an employee. (Photo provided)

“The biggest change in technology has been the speed in which things get done faster. But the expectation is faster as well. Also, the phone doesn’t ring nearly as often, as email is used. I remember when the city bought the photocopier: The finance director said one was all we needed for the whole city. No one else could buy one for their own department.”

Many of the department’s infrastructure projects have received recognition at the state level from APWA and the American Council of Engineering Companies. In 2014 his section was one of three recognized with the APWA National Excellence in Snow & Ice Control Award.

Situated in the Midwest, winter maintenance is important to the city.

“Given that priority and our organizational culture of change, my management team researched the latest technologies and approaches and developed our own program into a nationally recognized winter maintenance program,” said Reeder.

There are several challenges to providing an effective response to winter maintenance, he feels. One is predicting the actual storm event, with both timing and quantity of snow.

“We make a strong effort to apply deicing prior to the storm event, but sometimes the way the storm occurs prevents deicing applications from occurring. We plow storm emergency routes while it snows but do not move into residential areas until the snow stops. In the longer duration snowfalls, the public can get impatient for their streets to be cleared. For the operators the biggest challenge is plowing around parked cars on our narrow streets.

“As part of the winter maintenance operation, we have equipment to create different solutions of anti-icing and deicing,” he continued. “Instead of always applying rock salt to streets, we usually apply salt solutions, beet solutions and magnesium chloride solutions. These solutions ensure even and thorough applications to street surfaces.”

Council Bluffs will also spread rock salt but spray the salt with one of the solutions. The options chosen are a function of whether they are doing pretreatment anti-icing or deicing, the amount of snow, duration of the storm, temperature of the pavement and expected temperature of the pavement. “Lots of variables come into play when considering the method of choice for winter maintenance,” he said.

When not on the job, Reeder enjoys home improvement projects, traveling, riding his Harley Road King Classic Touring Bike and weekly golfing. He and his wife, Carol, have two grown children, Emily Hill and Andy; and six grandchildren.

Regarding his years with the city, Reeder noted the greatest challenges have included replacing retirees with bright young people; and the lack of funding to adequately maintain the city’s public infrastructure.

“Keeping up with changing technology is critical, especially when communicating with the public. Understanding and adapting to the changing expectations of the public is another one. Many years ago I ran across a quote that I have embraced my entire career: ‘The business of public works is to manage the continuity of change.’”

The supreme challenge of his career was fighting the 2011 Missouri River flood, the longest-duration flood in U.S. history.

“Our city saw the river above flood stage for 100 consecutive days,” he said. “The city is protected from the flood waters by 28 miles of levee. During the flood the city, aided by the Iowa National Guard, maintained a 24/7 vigil to monitor the condition of the levee and make repairs as needed. Eighty percent of the public works staff was committed to flood-fighting.”