A phoenix that rose from the ashes of a poor relationship between the Columbia Heights, Minn., Police Department and the city’s public school district led to vastly improved synergy and a 30-year low in criminal activity. 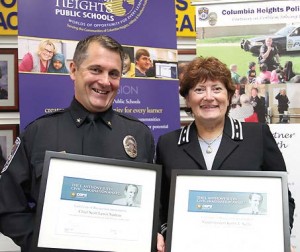 Scott Nadeau, Columbia Heights Chief of Police, and Kathy Kelly, Columbia Heights, Mo., superintendent of schools, receive the 2015 L. Anthony Sutin Civic Imagination Award. The department was recognized by the U.S. Department of Justice with the award for a successful program that has effected a dramatic decrease in youth crime and an improvement in school attendance and positive interactions with law enforcement. (Photo provided)

The turnaround has also earned the department several awards. It was one of four agencies to receive the prestigious International Association of Chiefs of Police Award for Community Policing in 2012; it also was honored by the Columbia Heights School District Superintendent’s Award of Excellence in 2013, the national L. Anthony Sutin Civic Imagination Award in 2015 and the Columbia Heights City of Peace Award, also in 2015.

Columbia Heights Chief of Police Scott Lewis Nadeau was selected to the office in 2008. He noted after just a few months on the job that the interaction between the department and the community’s youth was less than ideal. A lot less than ideal.

The city has a population of 20,000 and is the least affluent suburb in the Twin Cities metropolitan area, said Nadeau, adding that the student population is diverse, composed of 36 percent African Americans, 29 percent whites and 24 percent Hispanics. More than 38 languages are spoken in the schools, and 80 percent of students qualify for free or reduced lunches.

“The officers viewed the kids as being troublemakers and saw themselves as needing to correct the problematic behavior through arrests or threat of consequences,” said Nadeau. He and Superintendent Kathy Kelly organized a Youth Summit in 2009 that united police, the schools, county and state officials and other youth-oriented organizations in their quest to best serve kids. “Mentoring was highlighted as one of the biggest opportunities to solve our problems,” he said. “As a Big Brother, I reached out to Big Brothers Big Sisters of the Greater Twin Cities but found that funding limitations did not allow for an expansion of the school-based program into Columbia Heights. That changed in 2012, when the community and Big Brothers Big Sisters found a grant opportunity through which we could begin a school-based program.”

The pilot started at Highland Elementary with seven volunteers from law enforcement. Within three years it grew to more than 20 matches, most of whom are police officers. This program has been so successful that the department expanded into a second elementary school in 2015.

“We’ve started to recruit Bigs from outside the police department and began reaching the city librarians, public works employees and youth pastors within our community,” said Nadeau. “Part of what makes our story special is the huge changes that have occurred with our officers, our schools and our community. Our officers have gone from thinking their job is to control the behavior of youth to understanding the benefits of viewing youth as important partners and the future of our community.”

Another positive outcome has been the department’s relationship with the schools.

“It was an honor to be named with Chief Scott Nadeau as the 2015 L. Anthony Sutin Civic Imagination Award winners,” said Kelly, who was also the recipient of the 2012 VH1 “Save the Music Foundation” Superintendent of the Year Award and the 2013 Minnesota Supervision and Administration Division Art Educator of the Year for her integration of music and arts into the classroom. 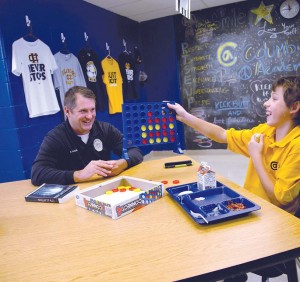 Chief Nadeau and his Little Brother, Connor, oft en indulge in friendly rivalry when playing games. Connor is Nadeau’s second Little; his first, Marcus, grew up but they still keep in touch. Connor and Nadeau easily share a first-name basis when together, putting them on equal footing. (Photo provided)

“I believe the award acknowledges the sustained collaborative partnership between the city of Columbia Heights Police Department and the Columbia Heights Public Schools. With the officers’ help, open gym, teen academy, D.A.R.E., Big Brothers Big Sisters and criminal justice P.S.E.O. (Post-Secondary Enrollment Options) courses, to name a few, have been implemented in the schools.”

The results have led to K-12 suspensions dropping by 130 percent, citywide crime rates dipping to a 30-year low, positive youth contacts by police exceeding 5,000 a year and more than 1,500 hours going directly to community programs and youth outreach. There has also been an increase in K-12 enrollment and gains in student achievement.

While progress is being made, the need to take part in important conversations relating to race, ethnicity and poverty still exist. “To that end, everyone in the community has a responsibility and needs to have a seat at the table to ensure that we are working together on these important topics,” said Nadeau.

According to Gail Vold Greco, director of communications and public relations at the Columbia Heights BBBS of the Greater Twin Cities, “The growth of the Columbia Heights youth has been tremendous. Currently, nearly 30 youth have an additional, caring adult in their lives, in great part due to Scott Nadeau’s leadership and the support of police officers, municipal employees and community volunteers. And because kids who are mentored have higher academic achievement, better relationships with their family and friends and are less likely to engage in risky behavior, the positive effects will have an impact on the greater community.”

“The Columbia Heights Police Department lives its core values of committed, helpful, professional and dedicated. Columbia Heights Public School students are better for it. As superintendent, I am exceedingly grateful to work with such a transformational leader as Chief Scott Nadeau and his wonderful police department.”

Nadeau gives credit not only to the kids and schools, but also to his officers.

“I could tell you dozens of stories about officers who were reluctant to become a Big, who I now see in our schools high-fiving and building relationships with our kids … Even more impressive than the growth of the program are the tangible results of the program’s accomplishments. I have no doubt that working as Bigs has not only helped them connect and identify with our community’s kids, but reminds many why they chose to become a police officer.”

Nadeau added that he feels fortunate to be working with a city that supports this effort through budgeting; overtime, when necessary; and full cooperation with elected officials and other city departments. “It makes our jobs much easier.”