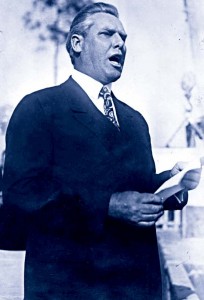 The city of Coral Gables, Fla., has been lauded for its design. Its development was the dream of farmer and idealist George Merrick. (Florida Memory)

George Edgar Merrick was, by all accounts, a hardworking, optimistic, creative idealist, with a flair for marketing and a skill for making money.

He was born near Pittsburgh in 1886, the eldest of six children. His minister father, Solomon, took the family to Massachusetts when Merrick was 12 years old. The family had been there barely a year when one of the 4-year-old twin daughters succumbed to diphtheria, prompting the Merricks to move to the more salubrious climate of Florida.

By January 1900 the whole family had arrived at the 160-acre homestead Solomon had purchased, sight unseen, with his life savings of $1,100. They were profoundly disappointed to discover their dream home consisted of a crude wood cabin on a partially cleared tract.

George and his father began the laborious task of clearing the land and planting fruit and vegetable groves. George peddled the family’s output of okra, beans, eggplants and other produce by mule cart around Miami until the groves began to bear fruit several years later.

After Solomon’s death in 1911, George turned to managing the groves. Within two years they were the largest agricultural enterprise in southern Florida.

In 1922, with 3,000 inherited acres of pine trees, Merrick began his master dream of building a suburb for the middle class to enjoy. It was a neatly subdivided community, with wide, tree-lined boulevards, grand entryways and plazas and homes constructed in Mediterranean architectural style. He called it Coral Gables, after the home where he had spent his childhood.

By the time the city was incorporated in 1925, Merrick and his team had sold $7 million of real estate and constructed more than 600 homes, built 65 miles of roadway and installed more than 80 miles of sidewalks. The beautiful town boomed, with thousands of people responding to a national advertising campaign.

This success inspired Merrick to plan a $75 million home development project, the largest of its kind up to then. He intended to build 14 villages, each in a different international architectural style, including Chinese, French, Italian, Mexican and African. A devastating hurricane in September 1926 blew away his dream, however. His fortunes were further ravaged by the Great Depression, and he died at the age of 52, leaving behind an estate of less than $400.