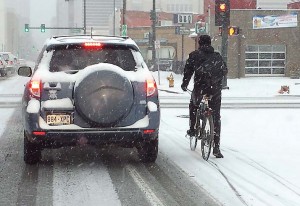 Because commuters continue to pedal throughout winter, communities must develop plowing strategies on multimodal and nonmotorizied transportation routes. In Denver, bike routes are predominately shared lanes that are plowed along with the rest of the street. (Photo provided) 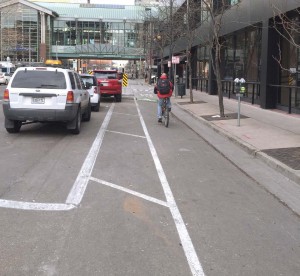 Bike lanes that are shared with motorized transportation lanes are often plowed to the curb whenever there is snow accumulation. In periods of heavy snowfall when the plows can’t throw all the snow to the curb, bike lanes are usually the first ones to be buried. (Photo provided)

Removing snow is, most days, anything but delightful. It’s bad enough to have to contend with clearing highways, byways and city streets, but with the rise of multimodal and non-motorized transportation routes comes another set of challenges for winter maintenance professionals.

As communities have embraced these unique routes as parts of the infrastructure, the search has been on for best practices to keep their surfaces in tiptop shape so the public can enjoy them all yearlong.

These surfaces include parking lots, sidewalks and pedestrian bridges, which are usually part of a community’s overall snow removal program. The type of route that offers the biggest set of challenges is the bike path, which may be a shared lane on a city street or a protected lane that separates cyclists from other forms of traffic.

Pat Kennedy, PE, Department of Public Works, Denver, Colo., said bike lanes are a still-growing facet of urban development and a wonderful addition to the community; however, great care must go into the planning of bike lanes, and they must be considered when it comes to snow removal.

“People want to be able to use bike lanes throughout the year, not just in the summer months. But depending on how they’re configured, communities may have to rethink the way in which they remove snow from them. It could mean buying more specialized equipment or hiring additional personnel, and that can add significant cost to the overall budget,” he said.

There are two challenges when trying to clear multimodal and non-motorized transportation routes: expectation and level of surface. Both issues are largely dependent on the kind of bike lane a community has and its specific need for keeping these areas safe and passable.

In Denver, the majority of the city’s 80 miles of bike lanes are located on city streets and denoted by a painted line. The lanes are regularly plowed to the curb whenever there is snow accumulation; however, in periods of heavy snowfall when the plows can’t throw all the snow to the curb, bike lanes are usually the first ones to be buried.

There is also an issue with the way in which the street is plowed. When a plow goes down a typical city street, it skims just over the top of the surface, creating a “squeegee effect.” It leaves behind a thin layer of slurry, which is broken down into slush as vehicles drive over it. A car can easily handle an inch of slush; however, a bike cannot. In order to give cyclists the clear pavement they need to be safe, communities have to bring in more specialized equipment or go over the bike lane multiple times. “That can become brutally expensive,” Pat said.

The other alternative is protected bike lanes, which not only give cyclists some separation from other vehicles on the road but also create a dedicated surface that must be cleared correctly for the type of transportation that uses it. According to Michael Kennedy, director of transportation management and repair for the city of Minneapolis’ department of public works, this comes with its own set of concerns for municipal leaders and public works professionals.

“When bike lanes are adjacent to the street, a plow can’t get to them, which means you must get a Bobcat, broom, skid steer or pickup truck to do the job — and that means added costs. Not only that, but you have to have the personnel to clear the lanes as well, which takes a huge economic toll.”

Not only can it take longer for bike lanes to be cleared when there are not enough personnel to do both the streets and the bike path, but the snow from protected bike lanes often has nowhere to go. It can’t go back out onto the street: It sometimes has to be carried to another site, at an additional cost.

“When you have a system of 90 miles of bike lanes, we want to give them the same level of service as we do the roads, which is a 24-hour standard. The difference with bike lanes is the extra removal operation,” Michael said. 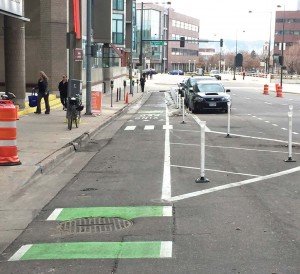 When it comes to bicycle lanes, the alternative to multimodal is a protected lane — which give cyclists some separation from the road but also creates a dedicated surface that requires more expensive snow removal options such as a Bobcat, broom, skid steer or pickup truck. (Photo provided) 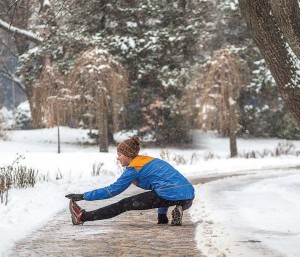 Two challenges when trying to clear any snow-covered route are expectation and level of surface. Bobcats with snowblower attachments are a solution of choice for park paths and trails. (Shutterstock photo)

Because many cities are still at the beginning stages of being bikefriendly communities, officials are brainstorming to see what works and what doesn’t where multimodal and non-motorized transportation routes are concerned. Both Kennedys have presented their strategies to a number of leaders and are on the look out for the latest in treatments and the most innovative of machines to help get the job done, but they say there’s a long way to go.

“We are still learning, and it’s important for us to reach an agreement on what we can and cannot reasonably do,” Pat said. “We plow those lanes on the arterials and collector streets, but the protected lanes come with added costs. When you have a snow budget of about $6 million, raising it 10 percent for equipment and personnel is not insignificant. There are definitely some conflicts, but we are working on it and sharing what we learn as we go.”

“Our policymakers are strong advocates for the bike lanes, and are starting to look at these seasonal issues in the planning phase of development so that we can create contingencies and give these routes the same level of service that we give the city streets,” Michael added. “Minneapolis was recently voted the best winter biking city in the nation, so we must be doing something right.”