A more diverse fire service is good for the community for many reasons. Experts believe gender representation is not where it needs to be, but significant progress has been made in the past 50 years. Women are not only serving on the front lines, but are also in leadership positions in both permanent and volunteer roles. 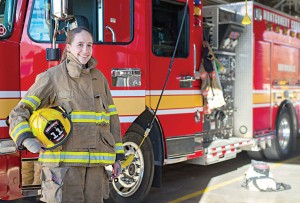 This trend is pleasing to such groups as the National Volunteer Fire Council, the leading nonprofit membership association representing the interests of volunteer fire, emergency medical service and rescue services. Women make up about half of the general population, so it stands to reason that they should occupy the same percentage of positions in a fire hall. But that is simply not the case.

In a June article on the NVFC website, firefighter and EMS officer Candice McDonald outlined the state of affairs:

“Women make up just over half of the U.S. population but comprise only a small percentage of the fire service. The International Association of Women in the Fire and Emergency Services reports that there are approximately 6,200 female career firefighters and an estimated 35–40,000 female volunteer firefighters. This is out of a total of 1.1 million firefighters in the U.S. Yet new research by the National Volunteer Fire Council shows that women have just as much interest in becoming a volunteer emergency responder as men. What we find then is what has been a largely untapped market of potential volunteers for departments to reach.”

Kimberly Quiros, chief of communications for the council, agrees with McDonald’s statements and offers solutions. She said her organization is committed to attracting women, millennials and minorities to the fire service.

Diversity training is one way departments can gain such groups, but it all starts with awareness. 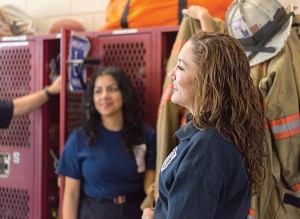 Manlius, N.Y., has experienced a spike in interest from females, who now make up about one-fifth of the local fire department’s volunteers. (Photo provided)

“There is a large interest in volunteering (among women), but many don’t know how to go about it. There is a disconnect,” she said. “They are often unsure about the level of commitment required and expectations.” This uncertainty is one hurdle departments have to overcome if they want to better serve their communities by bringing on competent public servants. “Volunteers are the backbone of our emergency service system,” Quiros added.

That’s why her organization has launched the national “Make Me A Firefighter” campaign. According to its website, www.makemeafirefighter.org, the recruitment effort is “aimed at connecting those rare folks — the fighters — to opportunities to serve their communities in ways that few can. Our goal is to help people across the country — no matter who they are or where they come from — see themselves in these roles and connect them to everything they need to serve their communities.”

There are many underserved communities that could benefit from individuals with an attitude of service. According to a statement from the NVFC, volunteer firefighters make up 69 percent of the nation’s fire service and save communities nationwide an estimated $140 billion per year. Yet while the number of volunteers has declined by about 12 percent since 1984, call volume has nearly tripled. In addition, the average age of volunteer firefighters is increasing and departments are finding it difficult to reach millennials — those within the 18–34 age range.

NVFC received a federal Staffing for Adequate Fire and Emergency Response grant to help departments address these challenges. A soft launch was held over the summer and fall to inform departments about the campaign and release initial resources. The campaign is now fully launched and promotion to the public has begun. The NVFC encourages volunteer and combination departments to register at portal.nvfc.org, use the recruitment tools and post their opportunities so potential volunteers can find them.

Among its features, the site lays out what it takes to become a volunteer firefighter and provides real perspectives from people who serve every day. While it doesn’t target females exclusively, the site does make it possible for them to connect with opportunities in their respective communities.

A town near Syracuse, N.Y., is a case study for mobilizing female volunteers. While volunteer departments struggle to build their membership, Manlius has experienced a spike in interest from females, who make up about one-fifth of the volunteer firefighters at the Manlius fire hall.

According to Chief John Buskey, there’s no magic bullet when it comes to attracting females to the fire service.

“Honestly, a lot of it is critical mass,” he said. He said when one or two join, it inspires their peers to do the same. Suddenly, the job is not as taboo.

In order to continue to attract competent women, Buskey calls for a cultural shift. In his words, “If you can identify one or two ladies who want to join, then you can create interest.”

That model certainly has worked for his department. It currently has seven female volunteers who come from all walks of life: college students, mothers, grandmothers and so on.

Regardless of their background, Buskey said they come ready to work hard. Contrary to some stereotypes, his female colleagues can outwork any guy. They don’t get special treatment on the job: In fact, if anything, they have to work harder in the face of gender discrimination. They’ve had to “overcome stigma to prove themselves,” Buskey said.

And the extra estrogen seems to help balance out the department, in a good way.

“They really round out who we are as a department,” he said, noting they bring a sense of calmness and compassion to the job.

Buskey said the men have responded well to the female additions, and the women seem to feel at home.