The field of law enforcement is treacherous terrain. But in a middle ground where innovation and integration unite, technological advancements add a measure of protection for those who strive to ensure public safety.

When engaging with those directly or peripherally affiliated with police work, two particular vantage points emerge. In one variant equipment and devices are cited while the other delves into particulars of the vehicles themselves.

More notable trends of the past year or so include the implementation of body cameras, the use of drones and thermal imaging. While the use of body cameras by law enforcement remains a hotly debated issue, their capacity for exonerating or implicating a person has uniform merit.

In November a significant partnership formed between Edesix, a frontrunner in the global market of body-worn camera solutions, and Vidsys, which formulates software for the cameras. The alliance allows what is being touted as “an integrated joint solution between Edesix’s VideoBadge, VB-300 and Vidsys real-time situation management software.” The VB-300 series is among the pioneering formats for WiFi-enabled products, which provide security and footage protection features and streaming in real time.

Richie McBride, CEO of Edesix, said in a press release: “We’re delighted to be collaborating with Vidsys to ensure that public safety users are provided with an overall management solution. As body cameras become more commonplace, the importance of seamlessly integrating footage with an operation center’s management system is fast becoming prevalent in the security marketplace.”

Another unique collaboration merges the concept of thermal imaging with the prevalence of drones. Thermal imaging is an imperative asset in any ancillary emergency services, assisting with hindrances where a line of vision is hampered. Temperature measurements can detect heat within a structure and provide monitoring of mechanical and electrical equipment at minute changes not immediately detectable to the naked eye.

Just weeks ago, FLIR Systems Inc. announced a merger with drone industry leader DJI Innovations that gives them the initiative to create a joint product known as the DJI Zenmuse XT: a stabilized camera that intertwines the visual impact of thermal imaging technology with the acuity and agility of drones. “FLIR and DJI today support many of the same commercial applications,” said Andy Teich, president and chief executive officer of FLIR. 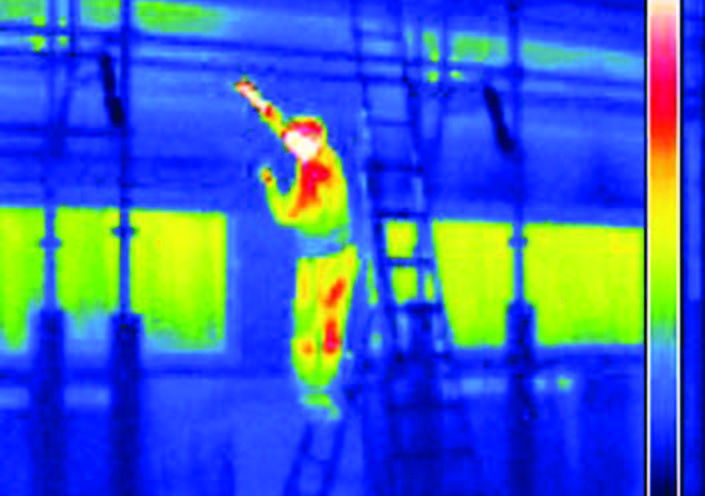 One unique collaboration that has law enforcement applications merges the concept of thermal imaging with the prevalence of drones. Two companies are already preparing devices that will be capable of airborne and ground-based surveillance, condition monitoring, search and rescue, drug interdiction and the detection of chemical, biological, radiological, nuclear and explosive weaponry. (Shutterstock photos)

“FLIR is thrilled to work with DJI to deliver these customers a plug-and-play thermal imaging solution for DJI’s established ecosystem of unmanned aircraft and related apps, while expanding our collective opportunities in the rapidly growing commercial drone market.”

Teich specified a lengthy list of scenarios in which the applications can be put into practical use, including airborne- and ground-based surveillance; condition monitoring; research and development; manufacturing process control; search and rescue; drug interdiction; and the detection of chemical, biological, radiological, nuclear and explosive weaponry.

Ford Motor Company has been lauded for tremendous strides in the past several months when it comes to accommodating the needs of vehicles with a unique blueprint.

Stephen Tyler, car/police marketing manager, outlined the variety of features classified as either essential or optional when designing the models.

“Safety is a key component of our police vehicle DNA,” he said. “Some of the key safety features of Ford Police Interceptors include side protection and cabin enhancement architecture, (which is) a hydroformed cross-vehicle beam that solidifies the vehicle’s sides. Safety cell construction also helps direct the force of a collision around the occupant compartment, using ultra-high-strength boron steel, high-strength aluminum alloy and advanced plastics.”

Optional features include ballistic door panels that are certified by the National Institute of Justice to withstand Type II and all lesser NIJ rounds. Also available is reverse sensing, blind spot monitoring mechanism with cross-traffic alert and a special surveillance mode that warns of approaching pedestrians at the rear of the vehicle. When movement is detected, a chime alert activates, the driver’s side window automatically rises and the vehicle doors instantly lock.

What is on the “wish list” for the foreseeable future, in what one officer jokingly referenced as the “James Bond” style of equipment? In more remote locales across the globe, ideas have already materialized in the form of spy drones, high-end surveillance cameras, automatic license readers and secret LEDs embedded behind the front grill of patrol cars. Some K-9 units are being outfitted with GPS devices and heat sensors, and industrial-grade tires are being fashioned exclusively for police vehicles. A company called StarChase even manufactures a tiny, air-compressed cannon that projects a minuscule GPS tracker, which attaches to a speeding vehicle. Even if the criminal manages to elude officers during the chase, with such technology, the driver can be apprehended at a later date.

From the visionary to the conceptual to the practical, the technology does off er a common goal: to give law enforcement officials and the people they serve a sense of reassurance and peace of mind.