Bayfield, Wis., is a small tourist town on the eastern side of the state. A gateway for the Apostle Islands, it features scenic hiking trails, hosts a yearly Apple Festival and is known as the Berry Center of Wisconsin. 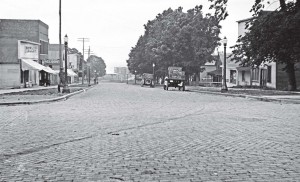 The charming cobblestone streets of Bayfield, Wis., were something city leaders opted to preserve a few years ago. Residents and visitors valued the flavor they added to the tourist destination, which is also known as the Gateway to the Apostle Islands. (Photo provided)

Over the years, tourist traffic and local use effected significant damage on the picturesque city’s historic brick streets, however.

In fact, the historic brick streets were in drastic need of repair. In 1984 the Bayfield Common Council adopted a resolution declaring concern for the historic preservation of the city and identifying streets where the original brick would be preserved. But because the Historic District is listed on the National Register of Historic Places, the design of the reconstructed streets had to balance modern needs, such as updated roadways and pedestrian and bicycle facilities, with the historic character of the streets.

In about the year 2008, the city hired Strand Associates Inc. to assist with the reconstruction plan. Strand helped Bayfield locate and apply for a Transportation Aid Grant. Eventually, the city received a $741,600 Transportation grant administered by the Wisconsin Department of Transportation. Other sources of funding for the project were a Focus on Energy Grant and Xcel Energy Match of $1,430.00 for LED post-top streetlights and a General Fund Loan of $750,000 from the board of commissioner’s State Trust Fund. With the DOT funds, the city had to meet state and federal environmental standards, in addition to National Register of Historic Places criteria.

Not only did it need to work with the brick streets, but the infrastructure below needed repair. 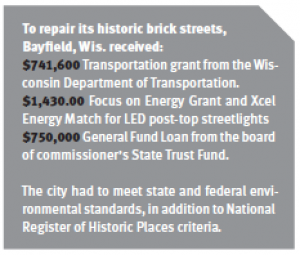 “We originally thought the entire project could be done together, but due to other funding possibilities, the infrastructure work was done first, followed by the Historic Street Project,” said Billie Hoopman, Bayfield city clerk. Th e brick layer was added over top of the renovated street underneath the bricks. Colored concrete parking lanes were added to accentuate the natural color of the 1920 brick pavers that were salvaged and reset over a modern pavement and drainage structure.

Preparing for such a project required attention to various communication avenues. Hoopman said in order to let residents and visitors alike know what was going on, “we sent newsletters informing them of the work that would begin and the progress being made. We later sent daily/weekly news blasts by email when the work was underway. The city also worked closely with the Bayfield Chamber of Commerce and Visitor Bureau, which assisted with disseminating information about the project and proposed detours and cohesive signage that assisted both vehicular and pedestrian traffic to our downtown area while construction ensued.” This was a very important step in the process, given the tourist attraction Bayfield has become and the desire not to hinder tourist traffic. According to Hoopman, the hardest parts of the project were: 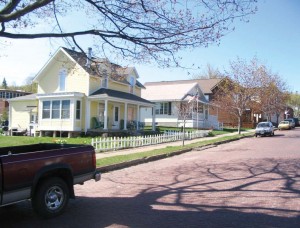 At picturesque locations like Swede Hill and others, various communication avenues were used to keep residents in the loop during the project. (Photo provided) 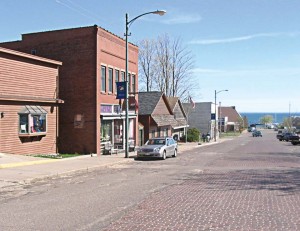 Even the gentle rumbling noise made by a car driving on a brick road was preserved during the reconstruction project, said the city’s mayor. (Photo provided)

1. Obtaining the appropriate permits and the length of time it took to do so

Approximately three-quarters of the city of Bayfield is in a designated historic district. As a result, the project came under the review of the State Historical Society. It determined a memorandum of agreement was needed. This caused an additional delay in the project timeline and effort by outside sources and city staff ; it also added expense to the overall project.

“On a couple of occasions we tried to tie this project in with another project. Originally we thought we could replace the infrastructure and repair the historic streets at one time, but weren’t able to. This caused us to have to put a patch overlay on the historic street. Later we tried to complete the Historic Streets Project with the WIDOT Highway 13 Project, but again weren’t successful in doing so. In the end, we optimized funding opportunities and coordinated design and plan elements.”

Bayfield’s experience with renovating a historic district into compliance with modern street infrastructure — and in fact maintaining historic lighting fixtures with modern LED elements — taught those involved to value the following priorities:

The outcome of Bayfield’s seven years of work? The new streets offer residents and tourists a reminiscent perspective of the town at a simpler time. “There is a nice, soft, gentle rumble as you drive down the street, which reminds me of something way back when,” said Mayor Larry MacDonald.